Watching Oscar Award Winning Queer Afro-Latina Actress, Ariana DeBose, in her portrayal as Anita in the 2022 rendition of 'West Side Story' is the representation many Latinx families needed.

Ariana DeBose, Oscar winner of the Best Supporting Actress award for her portrayal of Anita in the remake of West Side Story, is a dead ringer for my cousin Vanessa. There aren't that many Puerto Rican actresses in Hollywood, and even fewer that identify as Afro-Latina, so to see a version of my own identity on that stage gave me a mixture of pride and curiosity.

As a Black Latina who's spent her life having to explain my identity to people (especially other Latinx folks), DeBose's win felt like a way for both me and my daughter to claim our Latinidad with the whole world watching.

A way to say, "SEE! We belong here too!" But it also left me wondering why at age 44 I'm still explaining to people that yes, I am Afro-Latina, yes, there are Black people in Puerto Rico, and YES, I speak Spanish, I understand Spanish, I read Spanish, and on a really good day I can write it too. West Side Story was meant to be a depiction of life for Latinx people in the '50s and '60s, and yet, it's safe to say that in some ways, much hasn't changed. Latinx folks are still being told to "speak English" and some people still take issue with interracial dating.

I watched the original West Side Story when I was a freshman in college and madly in love with Philip—a beautiful boy I'd been dating since my junior year in high school. Me, Black and Puerto Rican, and him, Italian, Irish, and German. We were head over heels for each other almost immediately. Our respective families, however, not so much. My grandmother on my father's side took a stance very similar to Anita's grandmother when she chastised Maria for dating Tony—a white boy. Yet, my Nana (my maternal grandmother) was quietly proud porque her granddaughter had landed "un blanquito." Now, to be fair, I don't think my other grandmother on my father's side thought "a boy like that would kill my brother" or that "he had no mother" as we heard in the movie, and I don't think my Nana meant anything deeply harmful with her quiet approval, but I do believe they both felt that life would be easier for me if I dated someone who was either Black, or a fair-skinned Puerto Rican. Philip's family, in their own way, agreed. It seemed society did too because much like the Sharks and Jets, there weren't many places we would go where we wouldn't be heckled or stared at by people on the street, or challenged by other students on our college campus. The colorism and racism that was portrayed in the '60s rang true in the mid-'90s, and sadly, we are still seeing it today.

But that doesn't mean that we as parents can't change that narrative. We, as parents, can stand as our kids' first line of defense and educate them on things like racism, inequality, and gender identity phobias. Sometimes, when it comes to kids, finding a story or a movie is the best way to get that message to stick. For me and my daughter it was West Side Story. Here are some key scenes you can use to engage in what can sometimes be tough conversations.

The 2022 rendition of West Side Story added a new transgender character to the original hetero storyline. In the film we witness the Jets give the character Anybody a hard time because of their gender expression. I used these as the perfect opportunity to talk to my daughter about gender rights, the concept of acceptance, and the love we should show our fellow humans, regardless of how they present in the world.

Parents, We Need to Change The Way We Discuss Gender, Sexuality, and Identity

It is still news to many people that not all Puerto Ricans look like Jennifer Lopez or Lin Manuel Miranda. The film does a nice job at including darker-skin Latinx characters throughout. The dance scene in the school gym is a perfect visual representation of the many shades of Latinx heritage. This representation means everything to me as a Black Latina raising a Black Latina. We took this as an opportunity to do a Google search for Latinx actors, actresses, and athletes to demonstrate all the beautiful skin tones that represent Latinidad.

The entire film deals with this topic, making it a perfect segue into conversations around "love is love" and how you can stand up for your love (or anyone else's) in a healthy, mutually beneficial way. Beyond that I also took it as an opportunity to teach my daughter how to tap into her beauty and self-worth, if she ever finds herself in a less than comfortable situation. She may only be 12 years old, but I believe it's never too early to instill these life long values in our children.

Meet The Afro-Latinx Twins Dedicated to Healing Your Womb

DeBose's portrayal of Anita was as honest as they come, and I am so incredibly proud to call her "ours." West Side Story struck all the right chords with me and brought back some long-forgotten memories. Just like the first time I saw it when I was 18, I still love it. Pero al mismo tiempo… I still feel somewhat "in the shadows", as an adult, watching Ariana DeBose win. I'm 44 years old. How did it take so long to see a person who resembles my familia take center stage in entertainment? And why are dark-skin Latinas still harder to find in Hollywood than a vegan pastelillo in Puerto Rico? Nevertheless, as a parent, I am grateful that I have a living breathing person to help my daughter better understand her place in nuestra cultura, and a beautiful, timely and relevant tool to help me navigate some of the tougher conversations facing our kids today. 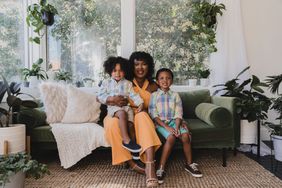