Discrimination based on the color of skin has deep roots in Latino culture. But it doesn’t have to continue for the next generation. The change, experts say, starts with parents.

As a child growing up in her Black Dominican family, Gloria Rosario-Wallace didn't know that colorism existed. At the time, the idea that a person with lighter skin was better than someone with darker skin didn't register. But, looking back, she sees that the messages were everywhere. One of the darkest of six children, she was often compared with a brother who had lighter skin and hazel eyes. "Relatives would say, 'Wow, he got all the looks, but at least you're smart,'" she recalls, as if brains compensated for her appearance. Her big, curly hair was another matter. Described as pelo malo (bad hair) by her mother, it was first relaxed into submission when she was 10 years old. Rosario-Wallace still remembers that day and the smell of the chemicals. "The 'worse' your hair, the younger you started getting treatments." She's also never forgotten how family members would yank her nose in an effort to make it straighter. "All these seemingly innocuous things made me feel as if I was never good enough," she says.

So when Rosario-Wallace became a mother, she was determined not to pass the same burden to her daughter, Amari, 4, and son, Khari, 1, who is lighter than his sister. The New York City mom and her Jamaican-American partner, Kevin, surround their children with positive images of dark-skinned people in books and toys. "I want my kids to love themselves and each other without feeling 'less than' because of someone else's notions," she says. "Yet a lot of it is outside my control."

There's only so much a parent can do, agrees Nayeli Chávez-Dueñas, Ph.D., a Mexican professor at the Chicago School of Professional Psychology and coauthor of the upcoming book Race and Colorism in Latino Communities: Towards a Racially Conscious Understanding of Latinxs. "Latino families come in all shades, and kids are part of a society that keeps reinforcing colorism in history books, telenovelas, ads, everywhere," says Dr. Chávez-Dueñas. But that doesn't mean parents should throw their hands up in defeat. Quite the opposite really.

To protect kids against the emotional scars, lack of self-esteem, and anxiety that often result from colorism, you have to be purposeful. "We can control the foundation we give them at home by helping kids understand what it means to be Black and instilling in them a sense of racial and cultural pride," says Dr. Chávez-Dueñas. "Think of it as a form of inoculation and a shield for what they're going to face in the outside world."

But first, parents need to understand how colorism became so deeply ingrained in Latino culture and society that now no one is immune to it.

It goes back to Latin America's history of colonization, Dr. Chávez-Dueñas explains, and a racial caste system that placed whites at the top by bestowing Spaniards with wealth and power and relegating Blacks and Indigenous people to the very bottom. This form of racism is further complicated in the United States, where the desire to assimilate and appear more "American" is implicitly tied to whiteness. "Latinos are often lumped into one homogeneous group in the U.S., which glosses over realities faced by darker Latinos and privileges conferred on lighter Latinos," says Dr. Chávez-Dueñas.

That dynamic can dictate the course of a person's life. "Research shows that lighter-skinned people tend to have more positive outcomes in life—better jobs, opportunities, health, and well-being," Dr. Chávez-Dueñas says. While those advantages can start at birth, the bias isn't always obvious. In fact, much of it is subconscious. "Like when a baby is born and someone in the family inevitably makes a comment about their skin tone, such as que bonito, esta tan blanquito (he's so beautiful, he has light skin) or 'she's cute despite her dark skin.'" These habitual lessons in color hierarchy stress that white is better, Black is bad.

Perhaps that explains why many families often point to a white ancestor in their lineage, as Carolina Tepexicuapan, a Salvadoran-American mom in Houston can attest. "My mother has always been proud of her light complexion, and she never hesitates to mention how her grandfather in El Salvador had blond hair and blue eyes," she says. It's a tale that Dr. Chávez-Dueñas is all too familiar with: "We have a need to feel a connection to power and those who have it. Power is whiteness in our communities. So when people say, 'I'm connected to this white person,' it's a way of telling oneself, 'I am also good, I am also smart. I come from people who are seen in a positive light.'"

While it may seem like an uphill battle to dismantle a societal ill that has survived for centuries, something so pervasive that it's infiltrated our households, colorism doesn't need to continue with the next generation, Dr. Chávez-Dueñas believes. "It's never too late to change," she says. "And you don't have to get any special training to stop racism. You can begin by acknowledging the reality, paying attention to how it happens and shows up in your own home, and trying to do better little by little."

Granted, it can be uncomfortable to confront our biases, but it's necessary. Think about appearances that you praise in front of your kid, for instance. Are you always swooning over light-skinned actors and valuing more European standards of beauty, such as blue or green eyes? Do you cluck in frustration when untangling your own thick, curly hair? If so, check yourself, Dr. Chávez-Dueñas says. The more you familiarize yourself with colorism, the more obvious the signs of it become.

Pay attention to the phrases that you use, including what Dr. Chávez-Dueñas calls "coloristic nicknames." Words such as negrito, negrita, moreno, or morena are often used as terms of endearment, but they have negative connotations. "Latinos may say there is no racism because we're all mixed, but the way we speak to one another exemplifies how we look at people through a racialized lens," Dr. Chávez-Dueñas says.

And while you may be ready to make changes, your relatives won't necessarily see a problem. "I had to unlearn a lot of the messages I was fed as a child about beauty, self-worth, and skin color," says Daniella Suárez Boyd, an Ecuadorian-American mom in Palm Beach. But as a mother of a 22-month-old boy, Allencito, whose father is Black, Suárez Boyd was willing to put in the effort to "decolonize my mind," as she puts it. Her extended family? Well ... "Their way of thinking is just exhausting. I've had to push back in my own life," she says.

"Sometimes parents try their best, but then in come the grandparents who make a comment," Dr. Chávez-Dueñas says. "How you respond, or don't respond, sends a message to kids." And while your first inclination may be to shut down Grandma, it's more effective to reframe the convo. "Telling them to stop will just alienate them," Dr. Chávez-Dueñas says. "Instead, add to what they said so it's less harmful, while pointing out what's wrong."

For example, when her mom said that Dr. Chávez-Dueñas's 1-year-old son had a flat nose, she followed up with, "That's why he's beautiful." And if a relative tells you that you're being "too sensitive"? "Say, 'I want my child to grow up in a world where they respect themselves and other people. If that's too sensitive, that's okay,'" suggests Dr. Chávez-Dueñas. "Keep trying—not to make relatives change but because, more important, children are watching and listening."

You can start discussing colorism with kids early. Begin by exposing little ones to people of diverse races and skin tones. Dr. Chávez-Dueñas calls this "positive racial socialization." Also look for examples of individuals who are treated differently because of their skin tone, whether it's in a cartoon or real life. "These opportunities let you bring up the fact that people sometimes can be very mean to those with different skin colors," Dr. Chávez-Dueñas says. "Chat in the moment rather than sitting kids down and turning it into a lecture. That won't work. Point out why it's unfair, how it hurts the other person, and what you can do about it." The discussion can be more in-depth depending on the age of the child.

Tepexicuapan approaches the topic organically with her 13-year-old daughter, Jocelyn. She appeals to the girl's love of science. "I tell her that she's a wonderful mixture of both her parents—and that's just how genetics works," Tepexicuapan says. "I've never heard her say something bad about her appearance, and she's one of the only Latinas at her school."

Also crucial is surrounding children with positive words and images, from movies to mantras, to counter the negative messages they're bound to hear outside the home, Dr. Chávez-Dueñas says. Holidays and traditions are a chance to celebrate diversity as well. Talk about the Afro-Mexican influence on Day of the Dead or how merengue, salsa, and cha-cha are essentially African dances. "You have to be explicit because they're unlikely to hear it anywhere else," says Dr. Chávez-Dueñas. "It's extra work that takes commitment."

When in doubt, simply affirm all the good you see in your child. "Even if it's just saying out loud, 'I love your dark hair and eyes,' it makes a big difference," Dr. Chávez-Dueñas says. "We want our children to recognize their inner and outer beauty and to be proud of who they are and where they come from. Society does not do a good job at helping kids of color, especially Black children, do that, so they need to hear it from you."

That's what Rosario-Wallace does with her daughter, Amari. "My partner and I always say, 'We're all beautiful Black people.'" The message is sinking in. Recently, the little girl looked in the mirror and exclaimed, "I love my curls!"

"I don't ever remember thinking that about my own hair," Rosario-Wallace says. "To know she's been listening to what I've been saying, and affirming and loving herself, is an awesome feeling." 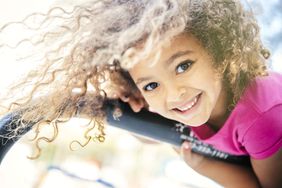 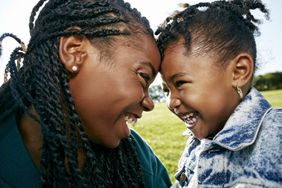 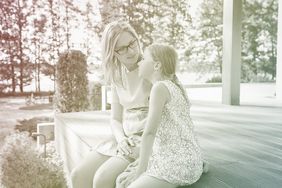 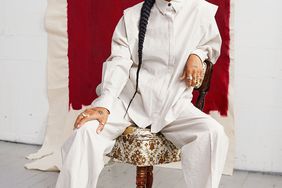