Michigan Governor Gretchen Whitmer talks with host of Your Political Playlist, Emily Tisch Sussman, about what it's like being a mom and leading her state through a global pandemic.

That "woman in Michigan" is no stranger to a challenge. Governor Gretchen Whitmer has navigated a lot over the past year, from fielding attacks from former President Trump, leading her state through a pandemic, surviving a kidnapping plot, and being one of the final contenders for President Biden's vice presidential running mate.

Her wit and political savviness have earned her the title of governor. But the title she is admittedly most proud of is mom. Governor Whitmer talks about motherhood, having tough conversations with her kids during the pandemic, and why women make great leaders.

Moms Are Showing Up

Parents, particularly moms, have endured a challenging year. Millions of women have been driven out of the workforce due to the COVID-19 pandemic, exposing the need for more gender equity in the workplace and improved child care.

But beyond the economics and the politics of the past year are the struggles so many have dealt with in private. There was no playbook for how to talk with your kids about a pandemic or even how to be brave during a time of global crisis.

When I asked Governor Whitmer what advice she would offer to parents and mothers who are still trying to figure it all out, she didn't hold back. "I think moms are uniquely equipped to understand that life is challenging, and at the end of the day, the most important thing that you can do as a parent is to teach your kids to live their values and to be strong and to speak their mind—that your kids are seeing a badass mom showing up every day as she is," she says.

For Governor Whitmer, that means moving forward and finding moments of levity where she can, like getting her second COVID vaccine with her daughter and proudly posting "shot girl summer" on Twitter.

Tough Conversations With Her Kids

Last fall, Michigan Attorney General Dana Nessel, the state police, and the FBI announced they had uncovered an elaborate plot to storm the Michigan capitol, kidnap Governor Whitmer, and overthrow the government.

In the months leading up to the public announcement, tensions rose with regular protests outside the capitol attended by both members of the militia and other elected leaders of Michigan. The protests eventually made their way to the governor's residence, where she lives with her husband and two daughters.

During our conversation, she detailed how she dealt with conversations about the threats against her and her family. "We've had a lot of ugliness then and hate leveled my way and I've had to have very candid conversations with my kids. I remember one day I was working [at home], and there were people out there with semi-automatic rifles and I [had] to explain what was happening," she says. "We talk candidly, we always do, but it's been tough stuff that we've had to navigate, especially with all the death threats, and sometimes people even extend that to my family."

Nevertheless, her family has continued to serve as her biggest supporters. When I asked if her daughters have ever asked her to consider no longer being governor, Governor Whitmer said they have not. "They're really resilient, tough, smart kids, and they're very low drama," she says. "That being said, these are times unlike anything any of us has ever navigated and giving one another a little bit of grace [is important]."

How to Talk to Kids About News Stories

Her Take On Women Leaders

Michigan was one of the first few states to begin locking down, and although she wasn't alone, Governor Whitmer continued to field more criticism than other male governors across the country. In March 2020, former President Trump called her "the woman in Michigan," while threatening to withhold federal assistance with the COVID-19 crisis.

Despite the rampant critiques, Michigan's response has been ahead of many other states. It was among the first states to report COVID-19 cases by ethnicity, and was the first state to launch a program similar to the G.I. bill for essential workers.

Governor Whitmer now hopes more women are inspired to step up and lead. "If there's some good that comes from this moment, maybe it's that women are seeing that there is a need for leadership, being bold, and showing up as you are," she says.

She also highlights the importance of having women leaders and their ability to achieve outcomes than their male counterparts. "I see our experience with COVID and you look at women leaders around the globe, and the outcomes for the citizens they lead are better and I think part of it is that they're bold, they're not afraid to do what they believe to be the right thing. But also, they lead with humility," she says.

Despite every curveball, threat, or mean tweet that has been thrown her way, Governor Whitmer keeps everything in perspective. "It's been challenging for everyone," she says, "but as heavy as our burden feels some days I know it's lighter than that which a lot of people carry every single day pandemic or not." 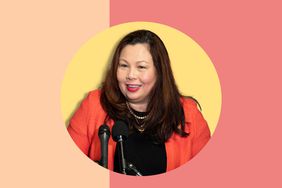