Sherihan Moustafa, the CEO and founder of Urban Modesty, shares her journey creating a brand that's empowering Muslim women and her own kids.

Sherihan Moustafa, the CEO and founder of the clothing line Urban Modesty, homed in on her love of fashion as a college student at the City College of New York in the late 2000s. The Brooklyn-based entrepreneur would read Vogue magazine and other fashion publications during her train ride to school. Her subway commute gave her a chance to sift through the pages and find the latest fashion trends—and even envision how she would mix prints and colors and create diverse silhouettes. It also sparked her interest in the fashion industry, but her inspiration to create her own line came years later.

As the child of Egyptian immigrants of Islamic faith, Moustafa's parents encouraged her to pursue a career in medicine, law, or another corporate profession. "When I went into college, I knew I could not do what I really wanted to do, which was go into the arts," she recalls. She settled on studying economics during her time in school, but she still felt pulls toward the fashion industry, especially because of her own life experiences. "When I was in [my early years of] college, I was not wearing the hijab, which is a traditional head scarf for Muslim women to wear," notes Moustafa. She explains that many women start wearing one when they hit puberty, whereas others associate it with marriage and begin sporting the head scarf after they tie the knot.

During her third year in school, she decided she wanted to start wearing the hijab. "I went home on a Friday, came into school on Monday, and I was like, 'I'm wearing this head scarf,'" she recalls. She soon noticed, though, store associates didn't help her as much as they did before she wore the hijab. She also realized there weren't many clothing options on the market for those who wanted to cover their skin. "I almost felt like the fashion industry turned its back on modest fashion and consumers seeking modest fashion." When it comes to modest attire, Moustafa says there are a couple of requirements: It has to be long, and it cannot show any skin. "Let's say it's a maxi dress—it cannot have any slits and it has to be lined," explains Moustafa. "So, all these basic things, but they are overlooked unless you're in this situation."

Creating an Inspiring Brand as a Mom

After welcoming her first child during her last year in college, Moustafa began thinking of a way to meld her economics background and passion for fashion. Through her personal experience trying to find clothes that aligned with her lifestyle and seeing other women in the same shoes, she also wanted to make a difference.

She signed up for courses on manufacturing and the basics of merchandising at the Fashion Institute of Technology to expand her understanding of clothing creation. She also took classes on the basics of entrepreneurship in 2013, the same year Urban Modesty was born. While there, she cultivated the Urban Modesty brand, giving it a logo and slogan: "If you've got modesty, we've got you covered."

Since launching her brand, Moustafa has created an entire collection of clothing, featuring hijabs, maxi dresses, Salah prayer outfits, and jumpsuits, that completely cover the skin while maintaining style with plenty of patterns, colors, and designs.

Setting an Example for Her Kids

While Moustafa stays busy expanding her clothing empire alongside her business partner and husband, Ahmed Megahed, she hasn't lost sight of the most important role in her life: motherhood. Through her work, she continues to teach her six children, ranging from ages 3 to 14, about embracing their Muslim culture. "I definitely think that kids learn by seeing, so, they'll copy your actions more so than words," she says. The brand founder shows her kids how to truly celebrate who they are by doing so herself.

Urban Modesty has a business partnership with Macy's and is the only modest fashion brand sold by the retailer. The company highlighted Moustafa during Women's History Month this year and shared her story on its Instagram and TikTok accounts. "My kids saw me talking about being a Muslim and who I am, and I really think that inspired them so much," she says.

By owning who she is, Moustafa is teaching her children that no matter what anyone thinks, they should be proud of they who are. "You can't take it on yourself to say, 'Why doesn't this person like me? Why don't they accept me?' That's not on you," adds Moustafa. "You can only just talk to them, educate, but if they don't want to accept it, that's not your responsibility anymore." 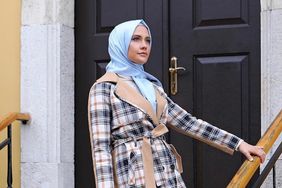