How to Handle Coworkers Who Don't Get Pregnancy at All

There are plenty of rumors about pregnancy floating around in the workplace, but not all of them are true. Two corporate executives share tips for helping you set your colleagues straight.

Tara Elwell Henning is the co-founder of Superkin. Superkin's mission is to banish the outdated conventions of motherhood and reinvent the narrative to celebrate a woman's unwavering badassery and indisputable transformation. Learn more and shop at www.superkin.com or follow @shopsuperkin on Instagram.

Miriam Williams us the co-founder of Superkin. Superkin's mission is to banish the outdated conventions of motherhood and reinvent the narrative to celebrate a woman's unwavering badassery and indisputable transformation. Learn more and shop at www.superkin.com or follow @shopsuperkin on Instagram.

When we first met in 2008, we were single and carefree, working at Louis Vuitton in New York. Fast forward more than a decade later and we are both married and living in California with three children between us. Being pregnant while holding director titles and managing teams wasn't easy, but we were lucky to have each other to commiserate with.

We both struggled with the usual slew of pregnancy symptoms and the added stress of standing in front of our closets thinking: What am I going to wear? (This led us to launch Superkin to help empower women to dress for more than their pregnancy.) But what we didn't expect was the constant wondering of what our colleagues were thinking and not saying about our pregnancies. Many of our colleagues were supportive, but not everyone was. When it comes to the workplace, myths and assumptions about pregnancy still abound.

We all know the office rumor mill can be brutal, and while you can never predict how your coworkers will project their assumptions about pregnancy onto you, you can certainly be prepared to respond. We gathered some of the most ridiculous types of people you will run into while pregnant at work, and our tips for helping you respond to them in a way that benefits your mental health, your physical health, and your career.

Facts to fire back: If your coworker had an easy pregnancy and questions your morning sickness, or her cousin's sister's friend had a rough labor and she just has to tell you, remind her that no pregnancy experience is the same. Some couples have a difficult time getting pregnant, others get pregnant immediately. Nausea, sciatica, gestational diabetes, bed rest, placenta previa—the list of symptoms is long and varies from pregnancy to pregnancy. It's never OK for anyone to project their pregnancy experiences onto other women. This advice goes double for the gory, 72-hour childbirth story that happened to a friend of a friend. Ask before you overshare.

Facts to fire back: Yes, you are planning to come back to work after maternity leave. And if not—that's fine too! 70 percent of moms are in the workforce, and the reason they want to be there is actually nobody's business. Whether a mom is intellectually fulfilled by her work or simply needs the income to support her family, not all women would prefer to be at home with their kids. Don't make assumptions.

Facts to fire back: Especially with a co-worker, don't try to "out" anyone who you think may be pregnant just because she's not drinking. You have no idea what they may be going through (infertility, pregnancy loss, etc.). And if you're at a work event where there will be alcohol and you're not quite ready to share your news: Ginger ale in a champagne glass looks awfully close to the real thing. You won't raise any eyebrows and can avoid those transparent excuses like, "I'm on a cleanse."

How to Announce Your Pregnancy at Work

Facts to fire back: Your colleague thinks you don't want to travel for work while pregnant? Puh-lease. Unless she communicates it, your pregnant colleague or direct report absolutely wants to go on mission-critical business trips. Don't try to suggest otherwise. Pro tip: She may be thrilled to get some solo time on an airplane, especially if she already has kids at home.

Facts to fire back: Is a co-worker calling you out for being "more emotional" while pregnant? This myth should forever be relegated to the script of a Mad Men episode. We're not saying that pregnant people (or anyone for that matter) never experience emotions, but commentary like this in the workplace might not only be counterproductive, but flat-out discriminatory. Suggest that your co-workers start speaking with the pregnant person on their team with empathy and a desire for understanding.

Facts to fire back: If you're suddenly not invited to a team happy hour because you're now pregnant, it's time to speak up. Just because you're busy growing a human doesn't mean you want to cut off all social activity. If anything, you might even be yearning to keep some sort of normalcy while everything else is changing. And remind your co-workers that while new moms might not be able to make spontaneous happy hours, given advance warning you'd be thrilled for a night out!

Facts to fire back: Is your teammate trying to take work off your plate in a way that is not in your best interest? Being pregnant doesn't fundamentally change your ambitions, your appetite for work, or your goals at work. If you want to take on more responsibility during your third trimester, you can! With more women in the workforce and having babies later in life, they don't just give up their careers because they're having a baby. Continue to rally behind awesome women, regardless of whether or not they're having kids.

Tara Elwell Henning and Miriam Williams are co-founders of Superkin. Superkin's mission is to banish the outdated conventions of motherhood and reinvent the narrative to celebrate a woman's unwavering badassery and indisputable transformation. Learn more and shop at www.superkin.com or follow @shopsuperkin on Instagram. 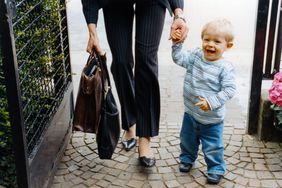 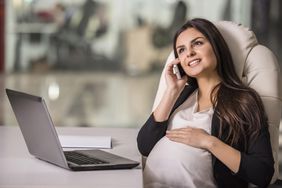 How to Announce Your Pregnancy at Work