Young mothers are doing whatever it takes to thrive at work as they build families at home. If you're struggling to balance ambition with parenthood, these insights may help.

On her last day of work before her baby girl was due, Danielle Kempe packed up her office, hugged her coworkers, and put her head in her hands to cry. "I loved my job," she says. "It was the most money I'd ever made and I thought it was the last time I'd get to that senior level." Her boss had been supportive of her pregnancy, but the organization where she worked—a domestic-violence nonprofit based in Somerville, Massachusetts—was too small to offer any paid maternity leave. And the cost of child care felt like more than she and her husband could handle.

"I've always been the person striving for the next step," says Danielle. After college, she steadily moved up the ladder in the not-for-profit world. After ten years, she had finally landed at an organization that was meaningful to her. But in the first week of her dream job, Danielle found herself doubled over the trash can with morning sickness. She was thrilled to be pregnant—it had been a long and frustrating road to conception—but was also conflicted.

"My husband and I did the math," Danielle says. "Most of my salary would go to paying for day care." Plus, they were still paying off medical bills from infertility treatments and student debt. Like so many others before her, Danielle grappled with seemingly unavoidable trade-offs between family and career but was determined to manage both.

For the past four years, I've been hosting dinners with millennial women to talk about the new rules of ambition and work success as part of ongoing research for my book, The Big Life. And by the second glass of wine, the conversation inevitably turns to one question: Will I be able to keep my foot on the gas of my profession when I have children?

When you've devoted time to building your career before having a baby, you assume that you'll be able to continue moving up as you build your family. But the truth is, life often doesn't work out that way. The motherhood penalty is still a reality. According to the latest Bright Horizons' annual Modern Family Index, 60 percent of working Americans agree that career opportunities are given to less-qualified employees over working moms who may be more skilled. And in 35 states and the District of Columbia, the average cost of child care for two kids exceeds mortgage payments, according to Child Care Aware of America.

We can all agree that when it costs more to take care of your children than it does to put a roof over your head, the system is broken. What follows is not take-on-the-system advice, it's advice for right here and right now, from women who are shoring up the support they need in order to continue to achieve and succeed in all parts of their lives.

As a girl growing up in rural Pennsylvania, Missy Lafferty knew she wanted a big career, but it wasn't easy to reconcile her ambition with the reality of building a family. "I wasn't always sure I wanted to have kids, but I knew that if I had kids, I didn't want to be the primary caregiver." By the time she and her partner, Pete, were ready to have a baby, they had been together for 11 years. While their home life felt secure and equal, she worried about what would happen when she went back to her job running recruiting operations for a tech company in New York City.

They were already sharing bills and household chores, so they agreed to take the same divide-and-conquer approach to their new roles. Pete would take the lead on scheduling and attending doctor appointments, while she'd handle family finances. They decided to split child-care expenses based on their income—Missy earned more, so she'd pay more. But she was still concerned about dividing up daily parenting tasks and becoming the lead parent by default. Everything fell into place, however, when Pete took paternity leave for a month after her own leave ended, and he became more comfortable taking care of their baby. "That month made all the difference because we knew we could both do it," she says.

Taking paternity leave—and timing it strategically the way Missy and Pete did—is the key to equality at home and at work, says Lauren Smith Brody, author of The Fifth Trimester. That is, if your partner is lucky enough to get it. Less than a third of U.S. companies currently offer paternity leave—and only a fraction of men take it when they're given the opportunity. "Paternity leave gives your partner a crash course in taking care of the baby, and it reminds you that both jobs are equally important," says Brody.

Amri Kibbler and her husband, Jason, of Brooklyn, New York, consider themselves a team. They have a list of daily must-haves that keep their lives running smoothly (plenty of coffee in the a.m. to keep him energized and 20 minutes of private time for yoga to keep her focused), plus a massive family calendar to keep track of the schedules for their daughters, ages 3 and 8. But Amri, the founder of HeyMama, a network for entrepreneurial mothers, doesn't dwell on keeping their relationship 50-50.

Instead, she and Jason are focused on their long-term goals, which include moving to a new home and creating a new business together. Knowing where they're going as a family has helped prevent day-to-day squabbles about whose job takes precedence. Even though Jason, a photographer and entrepreneur, is the breadwinner now, they've agreed that her business has even greater potential. Says Amri, "We're investing in my vision as much as we're investing in the dollar amount that he's bringing home today."

Be willing to switch gears.

When you're young, the hustle of the work world can be energizing. But when Carmen (whose name has been changed) and her husband had a baby last year, the late nights and weekend hours that had propelled her to a series of promotions in the advertising industry suddenly became unrealistic. After her maternity leave, she participated in a company program to work part-time, but her boss wasn't supportive of the initiative and gave her an unreasonable workload. Her son seemed to pick up every germ at day care, which made balancing things more challenging. Eventually, she was let go. "However, it was a blessing in disguise because it forced me to consider other careers with more flexibility," she says.

The lure of a flexible schedule was what made Alexandra Dickinson, of New York City, start her own business as a salary-negotiation consultant even before she was thinking about having a baby. Her days were a mix of networking, lunches, client meetings, and late-night events, and though she could work from anywhere, she was always working. The moment she realized something had to change was when she and her husband put down a deposit to reserve the last available spot at a local day-care center nine months in advance. "We looked at each other and said, 'Holy crap, day care is expensive!' " She decided to take a job at a personal-finance company that offered regular hours, a steady paycheck, and benefits. Instead of seeing the job as a setback, she considers it a way to express her ambition with a safety net.

It’s okay to wing it a little.

Over the past eight years, Andrea Schiola, of Denver, went through IVF, had three children, dealt with postpartum depression, and became the first female vice president on the sales side of her IT staffing firm. Her title is proof that you can have children, work hard, and be rewarded, she says. "Many of the other women in my company look to me as an example, and I feel a responsibility to show them, yes, there is a path for you, there is a way to be ambitious and still be happy with your home life."

But Andrea says that she and her husband never had a specific plan for how they would handle it all. Before her first babies were born—twin girls—Andrea was traveling three days a week and clocking in days from 7 a.m. to 6 p.m. in the office. When the twins came two months early, her mom stepped in as day-to-day child care (not for free—they pay her), but the key to Andrea's success has turned out to be working from home every day. She drops her kids at school by 7:30 a.m., and she's back at home at her desk by 8 a.m., checking in with her team, instead of sitting in traffic for an hour-long commute. "My boss initially gave me the okay for a trial period, and since it was working out, I just kept doing it," she says.

"There's no reason these days that someone should fail at work because she's unable to sit at the same desk for a preset number of hours a day," says Annie Dean, founder of Werk, which helps companies build a more flexible workforce through data. However, instead of waiting to see what happens, she suggests having a conversation about flexibility with your managers up front. "Say, 'I want to do my best work for you, and in order to do that, I need to shift my schedule or work away from the office.' That way it's not emotional. It's about the best business outcomes you can achieve."

In her leadership role at work, Andrea believes it's up to management to pave the way. "When women come back after maternity leave, we need to make sure we're being kind and offering to help them in any way we can," she says. "And if we're giving them the freedom to work from home or to leave early to pick up the kids, we also have to reiterate that to the rest of the office so there's no resentment."

Although our work culture across the country has a way to go, that kind of transparency will benefit everyone. "When women are able to take care of themselves, continue to participate in the workforce, and figure out how to be in a career where they're fulfilled, that's good for the economy and good for families," says Dean. "Not every person needs to take on the whole system, but hopefully we will over time."

The Best Ages to Get Pregnant, According to Experts & Parents 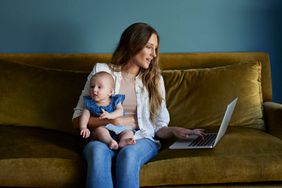 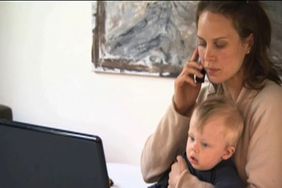