They may forget to pick up their socks, but fathers will also pull out all the stops for their kids. Meet our honorees.

After having children, Chris Pegula, aka The Diaper Dude, realized that diaper bags were way too feminine for guys to carry with any enthusiasm. So the Santa Monica, California, dad decided to design his own line and in the process changed how fathers deal with diaper duty (no more toting baby's gear in a gym bag). Pictured here with Cole, 4; he has two other kids, Juliet, 7, and Kai, 9.

Dad Who Goes the Distance

There's a lot that 7-year-old Mary McAuley, of Hendersonville, Tennessee, can't do. Born with cerebral palsy and suffering from epilepsy, she's confined to a wheelchair, can't speak, and needs a feeding tube to eat. But her dad, Tommy McAuley, has helped her achieve awesome physical feats. They are a father-daughter triathlon team. McAuley pushes Mary in a special stroller for most of his runs, pulls her along in a trailer when he bikes, and tugs his child in an inflatable raft as he's swimming. T.E.A.M. McAuley (older brothers, Grant, 11, and Griffin, 9, are members too) raises money and awareness for other families with special needs to get equipment to participate in triathlons.

The biggest reason for racing is Mary. "She loves the feeling of not being disabled, spending time with her family, and the wind blowing through her hair," says McAuley. How can he know this about a child who can't speak? "If you saw her contagious smile, you'd have no doubt," explains this proud dad.

Every day during his own midday break, father of three Derek Benson, of San Diego, decorates a sack with a full-color cartoon character for each kid. Seriously?

Jeremiah McNichols started zrecs.com (named after his daughter, "Z," age 4) to advocate for retail safety in children's products and to report on his rigorous testing of kids' gear (don't miss the sippy-cup section). Over the last few years, he's turned it into a blog network devoted to bringing together uber-useful, slightly geeky (but way cool!) parenting sites on topics ranging from gardening with kids to DIY crafts.

When Jim Whitney's daughters were ages 3 and 5, this Toronto dad found himself watching his kids play and wondering why there wasn't a toy that could be assembled and reconfigured in different life-size shapes. "I wanted something that could be a cave today, a pirate ship tomorrow, and a castle the next," he says. "Oh, and you'd be able to drape sheets over it for hiding." Voila! The Crazy Fort was born.

President Barack Obama's fierce love for his kids, Malia, 10, and Sasha, 7, is impossible to miss. His commitment to keeping children's issues at the forefront of his agenda has us hopeful for a bright future for all of America's families.

When Robert Haag's son, Michael, was born five years ago without a fully developed left arm, Haag was stunned to learn that prosthetic hands for infants were essentially useless because the "forefinger" and "thumb" were connected to each other and therefore immobile. That's why Haag, of Atlanta, came up with a simple fix. He cut just-for-show appendages apart so that his son could at least hold a block or a pacifier like other children. And thus began Haag's quest to make prosthetics useful to a child. He turned a Spider-Man fishing rod into a "fishing arm" by altering the pole to screw onto Michael's prosthetic socket. His goal isn't only to improve Michael's life but to help other kids too. he shares his designs online at openprosthetics.org.

Troy Jones (left, with Matilda, 3) is from Los Angeles, and Sam Holt (with Hugo, 3) hails from Australia. Together they created Being Dad for fathers-to-be worldwide to get the lowdown from fellow dudes about pregnancy (so you want to have sex with your eight-months-pregnant wife?) and birth (yeah, he'll come out as clean and cute as in the movies!) and other stuff they might not even think to ask.

Best Dad on the Dance Floor

Andy Blackman Hurwitz is a founding father of Baby Loves Disco -- the nationwide dance party for toddlers and their parents. Against all odds, BLD manages to successfully unite a dance floor and deejays spinning '80s tunes with stuffed animals, bubble machines, and diaper-changing stations. But that's not all. The Narberth, Pennsylvania, dad also produced three kid albums that spread his love of music to the younger generation: Baby Loves Salsa, Baby Loves Hip Hop, and Baby Loves Jazz. We just want to get our hands on his iPod playlist.

This father doesn't just look good, he does good! A poster pop for blended families, Brad Pitt is at the forefront of the Make It Right Foundation, building green, sustainable, affordable housing for families in post-Hurricane Katrina New Orleans.

Tony Hawk is the type who throws himself off a ramp to complete gravity-defying stunts before picking up his youngest at daycare (he has four kids ranging in age from 1 to 16). But what really bumps up this San Diego thrasher's cool factor is how he spreads his passion for the sport by raising funds for public skate parks in low-income areas through the Tony Hawk Foundation. The program gives kids a safe place to practice the sport while building their self-esteem and confidence.

When biotechnologist and medical doctor Hugh Rienhoff's daughter, Beatrice, 5, was diagnosed with a mysterious and potentially fatal genetic disorder, Dr. Rienhoff (left with Beatrice) decided to sequence her DNA himself to find out exactly what was wrong. Now he spends all his free time in his San Francisco attic lab, sifting through Beatrice's genetic code in an attempt to help find an answer that will save her life -- and maybe others' as well.

Dads with the Write Idea

These fave writers both have brand-new books about fatherhood. Their accounts may not be classified as "parenting guides," but any dad will be able to relate to their experiences.

Author of American Parent. Father of Isaac, 2, and Nina and Lila, 5 months. 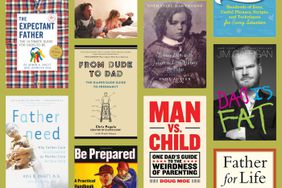