On Friday, June 24, the Supreme Court overturned Roe v. Wade, dismantling the decades-old ruling that protected abortion rights. This means that abortion no longer has federal constitutional protection in the United States. Rather, each state is able to make its own decision about the legality of abortions. And as many as 26 states are expected to ban abortion entirely.

With the future accessibility of abortions in jeopardy, many people will likely start turning to emergency contraception to prevent unplanned pregnancies. Depending on the type and brand, emergency contraception can reduce the chance of an unplanned pregnancy by as much as 85-99%, according to Courtney Benedict, Associate Director of Medical Standards Implementation at Planned Parenthood Federation of America.

How Overturning Roe v. Wade Impacts Parents, Pregnant People, and People Who Want To Get Pregnant

Still, although emergency contraception is an important tool for reproductive health, experts warn against stockpiling it right now. "One of the major worries people have about the current Roe v. Wade issue is their access to emergency contraception," says Manish Mishra, M.D., medical reviewer for AddictionResource.net. "But that doesn't mean this is the right time to stockpile contraceptives like Plan B pills."

Why You Should Avoid Stockpiling Emergency Contraception

It makes sense that people will turn to emergency contraceptive measures as an alternative means of preventing unplanned pregnancy. That said, experts don't recommend stockpiling Plan B in response to the news about Roe v. Wade.

To understand, let's compare this situation to the early stages of the COVID-19 pandemic. In response to the crisis, people stockpiled toilet paper, hand sanitizer, and other necessary supplies, leading to a nationwide shortage. If everyone stockpiles emergency contraception, the same thing could happen, which would only only further the impending crisis.

"Stockpiling plan B pills may lead to shortages, which can prevent those who really need it from having access to the drug. This can have the unintended consequence of making it even more difficult for people to find appropriate and safe solutions for unwanted or unplanned pregnancies (or potential pregnancies)," Mishra says.

What's more, you should consider things like expiration dates and storage requirements before buying emergency contraception. "Most drugs, including morning-after pills, need to be stored at room temperature," Manish says. "However, many people, especially those who plan to keep a lot, may find that they don't have the optimal storage space for them. If Plan B or other emergency contraceptives are stored in moist or humid places (such as in a bathroom cabinet—a common place to keep them), they can quickly be rendered ineffective or useless since moisture can seep into the tablet."

So what should you do instead? Your best bet is ensuring your reproductive rights are covered by planning ahead in different ways. If you've been thinking about getting on birth control but haven't gotten around to making an appointment, now's the time to take action. Talk with your partner about your five-year plan for starting a family, and make sure you're both on the same page.

Once you've nailed down your plan, act accordingly to reduce your own chances of needing abortion services. Of course, it can't hurt to keep a small supply of Plan B; just don't buy more than you realistically need.

Remember that there are a few different contraceptive options available, so it's important to find the right one for you. Below, we'll look at a few different types of emergency contraception so you'll be armed with the information you need when you speak with your doctor.

How Does Emergency Contraception Work?

Most commonly available in pill form, emergency contraception basically works like a super dose of birth control to reduce the risk of pregnancy. Depending on the option you choose, it can be used up to three to five days after you have unprotected sex. It's safe, and some types are easily obtained at your local pharmacy.

This emergency contraception pill is basically a large dose of synthetic progesterone. Like ella (discussed below), it's a one-dose pill, and as time passes, it becomes less effective. So it's best to take Plan B between one and three days after unprotected sex.

"Plan B is believed to act as an emergency contraceptive principally by preventing ovulation or fertilization (by altering tubal transport of sperm and/or ova)," says Heather Bartos, board-certified OB-GYN and founder of Badass Women, Badass Health. "In addition, it may inhibit implantation (by altering the endometrium). It is not effective once the process of implantation has begun."

Effectiveness: "Plan B is up to 95% effective if taken within 24 hours after sex," says Benedict. "But it loses its effectiveness if you are over 155 pounds and after 72 hours following unprotected sex."

Biggest pro: Plan B is available over-the-counter without a prescription so it's a great option simply due to its widespread availability and reasonable cost.

Biggest con: In order to be effective, you must be sure to use it as soon as possible.

Plan B is the best emergency contraception option if:

Ella is the only emergency contraception pill that contains ulipristal acetate, which is a progesterone receptor modulator. It's considered the most effective morning-after pill on the market. According to their website, ella is "the ONLY morning-after pill proven effective when pregnancy risk is the highest"—within the first 24 hours after ovulation. This makes it a great option if you're close to ovulation.

Effectiveness: "Ella lowers your chances of getting pregnant by 85% if you take it within five days after unprotected sex," according to Dr. Bartos. That said, the sooner you take ella, the more effective it becomes.

Biggest pro: Ella is more effective than other morning-after pills for people who weigh 155 pounds or more (though it may not work as well if you weigh 195 pounds or more, according to Planned Parenthood). Ella delays or prevents ovulation even after your ovulation hormone (LH) has started to rise.

Biggest con: Ella sounds like the best option out there, but we found it extremely difficult to obtain. "Ella requires a prescription, and not all pharmacies carry it. [And only] some states allow pharmacists to prescribe it," says Dr. Bartos. (Curious, we contacted eight different pharmacies in states across the country and none of them carried ella. However, it might be obtained online through the Planned Parenthood Direct app, Nurx, or PRJKT RUBY.

Ella is the best emergency contraception option if:

The copper IUD used as emergency contraception primarily works by preventing fertilization of the egg by stopping the sperm and egg from meeting, says Benedict. It must be inserted within five days after unprotected sex, and makes sperm less able to fertilize the egg, according to the American College of Obstetrics and Gynecology (ACOG).

However, a word of caution: It's relatively uncommon to actually get it inserted on an emergency basis. "It depends on your provider's schedule AND your insurance. Some plans don't allow you to do the counseling and insertion on the same day, and it has to be inserted within five days of unprotected sex to work as emergency contraception," says Dr. Bartos. "So it's best to already have an OB-GYN as an established provider and ask to get in and have the IUD put in ASAP."

Effectiveness: If placed in time, an IUD is up to 99% effective at preventing pregnancy, says Dr. Bartos. It also works for people of any weight.

Biggest con: Given the information above, we're not entirely sure a copper IUD should even be considered a form of emergency contraception. Unless your OB-GYN is super-speedy about ordering, fitting, and inserting the IUD (and none of the ones we called were), you could end up outside the window of effectiveness. Planned Parenthood clinics can also insert a copper IUD, but they, too, might be unable to provide same-day service.

An IUD is the best emergency contraception option if:

If you use emergency contraception, you may experience some side effects. The most common ones, as listed on the ACOG website, are headache, nausea and vomiting, breast tenderness, abdominal pain, dizziness, and fatigue. In most cases, these side effects should be mild to non-existent.

However, Dr. Bartos warns, "Plan B can definitely cause nausea—it's a sizable dose of progesterone. If you throw up less than 2 hours after taking it, it hasn't absorbed and you need to take again." 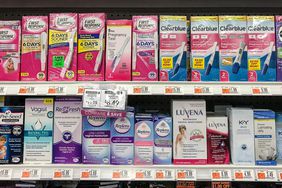