How to Deal With Your Partner's Annoying Habits

The toilet seat that's up. The empty milk carton in the fridge. The socks under the bed. Sigh. But you do things that annoy your partner, too—and small changes could make a big difference for both of you.

Daphne de Marneffe, Ph.D., is a psychologist and the author of Maternal Desire and The Rough Patch: Marriage and the Art of Living Together.

Do you know what keeps couples therapists in business? Dishwashers and cars. All right, that’s a bit of an exaggeration. But for the couples I see, dishwasher-loading technique and driving style rank high on the list of minor irritations. And daily annoyances often lead to tit-for-tat squabbles that are painful for everyone involved, especially when you’re sleep deprived.

Over the long haul, the person you live with will continue to irritate you simply because he’s human. But when you’re dealing with a partner who doesn’t replace the toilet-paper roll, assumes you’ll feed the dog, or plays games on his phone during family movie night, it’s natural to wish you could escape into one of those Instagram photos with spotless countertops and sprigs of rosemary in vases.

Of course, not all aggravations are the same. There are tendencies that can’t be helped, like your partner’s snoring. There are the characteristics that annoy you on a regular basis—like his lateness—but that aren’t intended to torture you. Finally, there are those inconsiderate or careless behaviors that you’ve signaled are important to you but never seem to change. And you can cause even more friction if you treat an unintentionally irritating behavior as if it were a guided-missile attack.

When you’re annoyed by things your partner can’t help, ask yourself: On a scale of one to ten, how much does this bother me? If it’s a five or under, make it your goal to zip your lips, count to ten, and practice deep breathing. If it’s over a five, bring it up with as much tact as you can muster (“I know that you can’t help it, honey, but could you try to chew a little more quietly?”) Hopefully, he’ll want to please you and respond at least semi-gracefully. The bigger challenge is dealing with exasperating habits and behaviors over which he seemingly should have some control. Here are some ways to help yourself cope.

Obviously, turning every irritating behavior into a target for improvement is a losing proposition, since no one wants to live in an atmosphere of constant criticism. In some couples I’ve seen, such nit-picking has led one partner to ask the other, “Do you even like me?” Consider which bothersome behaviors end up truly compromising feelings of trust or closeness in your relationship. Those are the ones that merit your focus.

For Rob and Lila, a couple with three young kids, the problem was that she often interrupted him when they were socializing with friends. “In my culture, people are loud and boisterous, and they always interrupt each other as part of conversation,” she said. “It’s no big deal!” Rob said, “Yeah, but I feel like you’re disrespecting me, and people notice it.” I said to them, “No one is wrong here. Lila, you aren’t doing something ‘bad’ to Rob, but what you are doing feels bad to him. You need to meet each other halfway.” We worked on helping him feel less put down by her natural style, and helping her be more sensitive to her effect on him. Just knowing that they were taking each other’s feelings to heart made them more comfortable.

How You Argue With Your Partner Matters, Study Says

Couples often get irritated with each other without realizing that the situation itself is heightening their anxiety. Debbie and Todd have two toddlers who had been fussy in the backseat of the car for six hours during a family road trip, and both parents were still frustrated when they arrived at our session a week later. “Todd refused to listen to me about the car seat not being adjusted right, and he wouldn’t stop the car,” said Debbie. “You were screaming, and it was a curvy road,” he countered. “You could have gotten us into an accident!”

I pointed out that it takes a lot of attention to drive safely, and that when you’re the passenger, it’s easy to forget that the driver has limited bandwidth. Both Todd and Debbie were relieved I didn’t think either of them was “at fault.” They’d been feeling stressed in the car and started seeing everything in terms of “who’s the good guy and who’s the bad guy.” Try to recognize when you’re both reacting to outside forces, and give each other a break.

Sometimes irritating behavior (or our irritated reaction to behavior) has a deeper cause—and if you realize that, you can address it more effectively. Rashida and Clem were a couple with two small children. Clem had always struggled with ADHD, and though it was less severe in adulthood, he still got distracted and left tasks unfinished. Rashida “saw red” when he left pots in the sink or forgot an appointment, which then made Clem feel blamed and ashamed. I worked with them to see that they were dealing with a complex challenge that needed help on several fronts, including Clem’s making an effort to remember the things that mattered most to Rashida, and Rashida’s trying not to take his shortcomings personally.

Study Says It's The Cuddling, More Than the Sex, That Makes You Happy

Similarly, underlying depression or anxiety can sometimes show up as a shortened fuse. When you’re a young parent, it can be hard to figure out if you’re depressed, anxious, or simply exhausted. But if you feel chronically irritable, you owe it to yourself to get some help. Turn to supportive friends, make sure to exercise, and talk to your health-care practitioner about potential causes and solutions. Likewise, if your partner’s behavior feels as if it’s part of a larger personality pattern of disregard for your feelings, you may need to seek help as a couple.

Practice not letting it get to you

When you raise your voice or make a snarky comment, it’s usually not a voluntary action—it’s a reaction. The most powerful antidote to irritation is being able to take a step back (a few minutes or hours later) and reconsider your reactions. When you can notice, breathe through, and accept your own distress, it helps you make better choices about how to respond.

On reflection, you’ll probably find there’s more than one cause. Yes, it was aggravating that your partner made a mess cooking pancakes Sunday morning, but perhaps you were especially grouchy because you woke up at 4 a.m. worrying about work and couldn’t get back to sleep. It’s easy to feel he deserved your reaction, but on further thought you might decide you were triggered for your own reasons. At that point, don’t try to justify your behavior or defend your “right” to react (“You’re such a slob!”). Your goal is to circle back and say something like, “Hey, sorry I reacted that way. I had a rough night. I’ll try my best not to take it out on you like that.” Then you might have the chance to say, “Sometimes it’s hard to face the kitchen cleanup. Maybe when I’m exhausted we could do it together?”

Above all else, try to keep minor irritations just that—minor. Having a sense of generosity and willingness to look at the big picture can keep them from ballooning out of proportion. You’d want him to do the same for you. 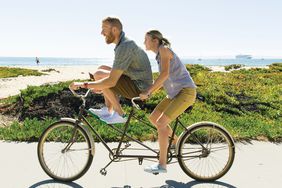