Marsharelle Tolbert and Shelly Shearlds, co-founders of the blog Sweet Potatoes and Black Beans, started out as two working moms driven to inspire others to focus on home-cooked meals. Here's their best advice on saving money, reducing waste, and taking the reins in the kitchen.

Shelly Shearlds says that growing up in poverty in South Carolina, and later Philadelphia, helped her become economical in the kitchen. She would often ask herself what she could do with one humble ingredient, how she could elevate it to make it "five-star from a financial aspect." She was also taught to budget, know what was within her means, and what she could plan for in the future.

Meanwhile, Marsharelle Tolbert, who also grew up in Philadelphia, was similarly being taught to get creative while cooking. In her house, they enjoyed "a lot of soul food," and her family would partner or potluck to "make the most of everyone's dollars." She says some of her fondest childhood memories revolve around that.

In 2008, both women, who met in college and later reconnected, became moms at 25 years old. Tolbert had been married for almost three years and was working as a subcontractor in marketing. At the time, her husband was transitioning to another job, so they had to be especially conscious about their spending. "I was also learning how to cook more at home," says Tolbert, who explains that her first pregnancy had encouraged her to learn more about food, be the healthiest version of herself, and diversify her ingredients.

Shearlds also found that pregnancy served as a catalyst for incorporating more healthy food and experimenting with new ingredients. "Being more educated on what it takes to grow a healthy human really enabled me to start really being more conscious about what I put in my body," she says. "I incorporated more whole foods, produce, foods that weren't fried."

At the same time, hoping to be economical as new moms, Tolbert and Shearlds were aiming to get the most bang for their buck. Tolbert found that buying frozen fruit would save her time and money, as the produce would last longer and was already pre-chopped. She also prepared dishes that would last, like vegetable stir fries, and Tolbert and Shearlds both used leftovers, packing their kids' and their own lunches.

The two women really connected on food, discussing their preferences, skills, and interest in entertaining. By 2015, one of their casual food conversations evolved into a collaboration. "At the time, I had my own blog," recalls Shearlds. "I knew that I could not or did not want to do it alone anymore. I said, 'Wouldn't it be great if we partnered and created a food blog?' And it was history from there."

The two began working on the food blog Sweet Potatoes and Black Beans. "[The site] started as two moms on a mission to empower folks, to take control in their kitchens, and basically, leave the mundane meals of day in and day out behind," says Tolbert.

In 2019, upon realizing that they wanted to interact with people and speak to them in real time about food and cooking, the duo officially launched Sweet Potatoes and Black Beans interactive dining experiences, which involve curating dinner parties and teaching clients their cooking techniques.

"That was a way for us to engage with our Black community and also expand our reach to other folks in person," says Tolbert. "Guests are encouraged to come into the kitchen with us and get hands-on or maybe just ask a question or observe our process while we're preparing a meal for them."

During the pandemic, Tolbert and Shearlds have successfully pivoted to engaging with their audience virtually, currently offering a series of cooking classes, including one in which they lead their students on a "journey of recreating pantry staples" and another where they teach preteens and teens life skills like budgeting, cooking, cleaning at home, and preparing them for adulthood.

Sharing their knowledge—and all the ways that budgeting and cooking are interwoven—continue to bring the pair joy. Here, Tolbert and Shearlds' best tips for families looking to save and have even more of a handle on mealtime.

Think About the Foods You Love

For parents who feel like they're too strapped for time or aren't sure where to begin when it comes to creating home-cooked meals, Shearlds advises tapping online resources and thinking about your favorite foods.

"Every family has like two to three meals that they always go to. Start with those and figure out what about those meals you enjoy," she says. "And then, all you need to do is put two or three ingredients into Pinterest, and you will get hundreds if not thousands of meal ideas. That is how I started. All I would do is put in 'chicken and sweet potato' in Pinterest, and I would get a ton of recipe ideas."

And while not every meal is going to come out perfect, she encourages people to keep trying. "You will, by default, become a better cook," says Shearlds.

Shearlds suggests setting aside regular time for meal planning. "By failing to plan, you're going to come up against impulse buying, and that is costly," she points out. "So, take out a couple hours on Sunday, sit down, write out your menu for the week, and then anything that you can chop or prepare in advance, do that. And that two-hour time block on Sunday saves you so many more hours during the week, and it allows you to really create amazing meals in 30 minutes or less."

If you're going into an office, you might be tempted to spend upwards of $20 on lunch. But Shearlds and Tolbert encourage people to save money by bringing leftovers from the night before when possible.

The tip to making that work: Cook something that you love so much, that you don't mind eating it again, says Tolbert. Or find a way to repurpose whatever it is you bought or made. For instance, rotisserie chicken can be made into a taco, a wrap, or a chicken salad. "Mask what it was before," she notes. "You're eating something new, but you're still utilizing those ingredients to the fullest."

Create a Vision Board With Your Family

Need a little more help on budgeting? Zeroing in on big picture goals can help you curb unnecessary spending. "Create a vision board with your family at the start of the year," says Shearlds. "[Ask yourselves], 'What did we want to do this year?' [Then say], 'That's going to cost money. Here is how we're going to get there. Get everyone's buy-in."

Then, when someone is tempted to make an impulse buy, you can ask yourselves, "Does that align with our vision to go on that trip to Paris this year?" If not, then you forgo it, and keep your eye on the prize, says Shearlds.

Tolbert acknowledges that when you first start meal planning and cooking more, it can be easy to get exhausted, but sticking with it will pay off.

"Trust yourself, and if you're already cooking for your family, you already have some skill level, you'll be able to just build on it," she notes. "And if you keep food in the home, it's going to be much easier. So, those pantry staples are key."

Shearlds adds that tasting your food as you go can help you develop your cooking skills. "Start with a little bit [of seasoning] at first, and taste as you go," she notes. "You are developing your skills in terms of cooking and creating something that you know you're going to love time and time again."

Allow Yourself a Little Grace

Whether you're struggling to stay on track with budgeting or cooking, Tolbert says it's important to give yourself grace. "That doesn't mean that you can completely fall off, but what that means is that [you can say], 'OK, I fell down. I'm going to get up, dust myself off, and try again,''' she says. "It's the same as in the kitchen. You can try again tomorrow to make something a bit more delicious." 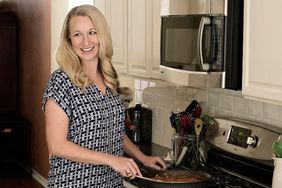