Ingrid Silva has been following her dreams since she was a little girl growing up in Rio de Janeiro, Brazil. Now as mom of a baby girl, she's devoted to breaking barriers and creating change.

While growing up in Rio de Janeiro, Brazil, Ingrid Silva learned that it was important to not only study and work hard but to make her own journey. And she began pursuing that goal early on. At just 8, she started dancing in a community dance project called Dançando Para Não Dançar. "Being a ballerina was never my dream," admits Silva. "I wanted to be a gymnastics, swimmer, anything with sports."

But she says that ballet found her—and ended up bringing "so much" to her life. At 12, she fully fell in love with dance. "I was like, 'Wow, I'm really gifted. I can do this,'" recalls Silva.

By the time he was 18, one of Silva's teachers encouraged her to audition for the Dance Theatre of Harlem. Silva ended up auditioning with more than 200 people and was chosen to join the company.

The opportunity came with some challenges. When she arrived in New York in January 2007, she didn't speak any English. "That was really hard, but I started learning things on my own," says Silva. The ballet dancer also had to get acclimated to living in one of the most expensive cities in the world. To supplement her income from the dance company, she worked in a restaurant, babysat, walked dogs, and worked for a catering company. Maintaining a steady flow of income, especially when she wouldn't be working for a week or two at a time, was always a delicate balancing act for the artist.

Silva's hard work paid off. In 2016, she expanded her work to include collaborations with brands like Nike, which served as a game-changer for her income. And last year, she also found a way to make the world a better place by co-founding Blacks in Ballet, an organization dedicated to highlighting Black ballet dancers from around the world, offering scholarships and creating workshops.

"We felt the need to be heard, to be seen, just to speak loud about diversity," notes Silva. "Every time I say I'm a ballet dancer, everybody's kind of shocked. They don't see many women of color who are professional dancers. So Blacks in Ballet is also a way of teaching them that we do exist. We are here. We are very talented. We are from all over the world, and we are here to inspire and to make change."

At the same time, she and her husband were preparing for parenthood—something she was initially "extremely scared" would impact her work. "As a ballet dancer, we know we are not supported in having babies and also pursuing our career," she notes. "There are many dance companies who are like, 'Oh, you're having a baby. So you're not coming back to dance.'"

On November 27, 2020, after being on an emotional roller coaster that anyone who was expecting during some of the worst days of the pandemic knows all too well, Silva welcomed her daughter Laura.

These days, thanks to a friend who provides child care, she has been able to maintain a sense of security as a mom as well as a ballet dancer. "Not many women are privileged to do that," she says. "And I am really happy to be able to break this barrier."

Now, as a new mom, Silva is facing new financial questions and working to get more organized, cut back on certain expenses, and plan for the big picture. "Diapers are so expensive, baby clothes are so expensive," says Silva. "It's a whole different world. Having a kid is really transformative."

But it's just one more chapter of her journey that she's elated to be immersed in. And this year, on May 10, she returned to the stage for the first time since giving birth. Silva says, "It was a blessing to be on stage."

Here, Silva's main takeaways on pursuing your dreams while paving your path as a parent.

Don't Feel You Have to Choose Between Career and Family

Society often tells women, in particular, that they can be moms or rockstars in their career but not both. Silva dismisses that antiquated assertion. "I hope [women] don't have to choose between the career that they love and being a mother," she says. "You should be happy as a whole."

Learn From Your Kids

Silva encourages parents to let little ones "explore and evolve" and to support them in everything they want to do. And while watching their evolution, do your best to learn from them, she suggests.

The ballet dancer feels like she's learning something new from her daughter every day—and every day is different. "There will be crying days. There will be very hard days, but there will also be days that you were like, 'Wow. I feel like a great mother, a great father,'" says Silva.

Be Empowered to Tell Your Story—and Create Change

In addition to Blacks in Ballet, Silva founded EmpowHer New York, an organization aimed at supporting "women who break through the glass ceiling imposed by society and live authentically according to their truth."

Silva's journey as an activist, ballet dancer, and now, new mom has only served to underline her belief that each of us has a story. She believes that no matter what your mission is specifically, you have the ability to make an impact. As Silva puts it, "We are devices of change." 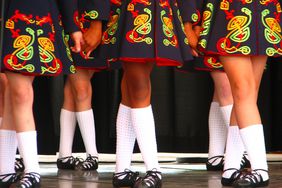