I had to make a very difficult decision: I could either pay off my arrest warrant, or I could buy my son Christmas presents.

In 2012, I got sober from alcohol and drugs—after being addicted for nearly a decade. Although this was my opportunity to finally be the father my son deserved, financially, Sober Me was still a mess. I was able to be more present for my son than ever before, but I couldn't afford to buy my son a single present that first Christmas sober.

As a father, this was a massive hit to my ego. It was extremely depressing, but not only did I get through it—it changed my entire approach to the holidays going forward.

There's a common misconception that once you get sober, everything magically becomes better. That couldn't be further from the truth. Pre-sobriety, I had already spent years destroying my life, which included my finances—and that doesn't get erased by sobriety alone.

During my active addiction, the only thing I cared about was how I was going to buy alcohol and drugs. Rent, bills, and other financial obligations were an afterthought. During those years, I destroyed my credit, broke leases, avoided paying back payday loans, and had some hefty legal fees. Once I was able to get sober, all of that was still there, waiting for me to deal with.

I was very fortunate that my own mother was able to get sober when I was 20, so when I was ready, she brought me to California to get clean and supported me during the process. That following summer, I moved back home to Las Vegas to be with my son again.

I had about $200 in my pocket and no job. And it wasn't long before the County Sheriff's office started calling me, chasing a hefty fine I owed for a warrant that was out due to some unpaid tickets I'd accrued while using. Plus, due to my terrible credit, it was difficult to even find a place to live.

I was determined to get a job, and I did finally find one, but it barely paid over minimum wage. As the months went on, and Christmas was creeping up, the sheriff's office was continuing to call me multiple times a week—and threatening to send someone to arrest me. During those months, I was saving what I could, but that fall, I had to make a very difficult decision: I could either pay off my arrest warrant, or I could buy my son Christmas presents.

After a lot of thinking, I felt it was the best thing, for both of us, for me to pay off that warrant. But it left me without enough money to buy a single present for my son. When I told my son's mother about what I had to do, and that I couldn't afford presents, I felt like a terrible father.

I had to make a very difficult decision: I could either pay off my arrest warrant, or I could buy my son Christmas presents.

I'm extremely fortunate that my son's mother and I have been able to rebuild our relationship since I got sober, and that she offered to put my name on some of the presents she bought him. Of course, it was a huge kick to my ego to let her do that, but it was one of the kindest gestures I've ever experienced. It brings tears to my eyes just remembering that she did that for me.

Still, watching my son open his presents that Christmas was difficult. My inner voice kept telling me: You're not a good father. To combat this constant self-talk, I tried to practice gratitude for what my son's mother had done for me. But most of all, I tried to convince myself that this was only temporary.

I promised myself—and my son—that I would turn things around. I was able to get through this time simply by reminding myself that this was just one Christmas out of the many that I was going to be able to spend with my son now that I was sober.

Something I learned is that regardless of how much we try to plan, life is going to happen in ways we never expect. One year, you may have a major repair that needs to be done to your house or car right before the holidays, or you may even lose your job. Situations like these can happen to any of us, but we're often so afraid of looking like a bad parent that we can spiral into a depression or bury ourselves in debt instead of looking at the big picture.

Today, I'm over nine years sober, and I've been financially stable for a while now, thanks to hard work and saving—but I still know that anything can happen. Through this experience, I also realized that my son's love or respect for me isn't dependent on what I can buy him for Christmas. And that's because his mother and I have raised him not to value things over relationships with the people he loves.

Today, I look around and see parents who are financially stable but get so stressed out about what they're going to buy their kids that they make terrible decisions with their money. And when I see that, I'm doubly grateful for my own experience struggling to get sober, to quit being broke, and to build a better life for myself and my son—because it's given me gratitude, and immense perspective.

When we can take a step back and recognize what the holidays are really about, we can stop judging ourselves so harshly as parents. Because one thing you should never measure your parenting skills by is what you can buy your child. You're much more than that. 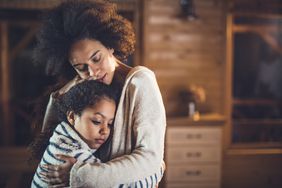 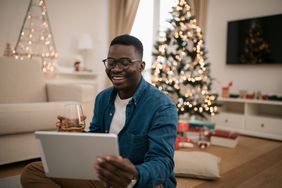 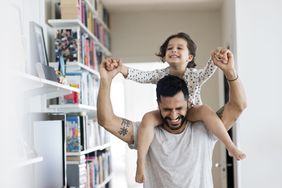 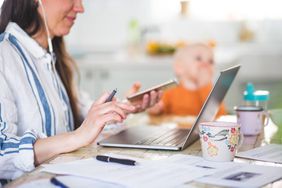