Mother's Intuition is Real And Here's Why You Should Trust It

Have you ever had a gut instinct that something wasn't right and made decisions for your kids based off that? Experts say mother's intuition is a thing and can be a key in decision-making, but here's how to know when to trust it.

When Kimberly Gervais's 13-year-old son asked to ride his bike to the beach with his friends, her initial instinct was to say no. Though lots of kids in the Little Silver, New Jersey neighborhood did the trek, it was a 5-mile ride and traffic had been crazy due to the crowded beaches. After much begging from her son, and seeing that the other kids were going, Gervais went against the little voice in her head. He could go but had to wear his helmet—something she noticed more and more kids weren't doing as they hit their teen years.

Thirty minutes later she got the call: Her son had been hit by a car. "He's OK all things considered—broken bones, road rash everywhere, but alive," says Gervais. "He has a broken hip and pelvic bones and the doctor said the impact was massive. No helmet would have been a very different outcome."

Gervais regrets not listening to her gut or her mother's intuition and says she'll never let that happen again. "This has made me feel like I will not let my kids, or other parents, pressure me into doing something that feels wrong or unsafe," she says. "It can be hard, especially with teenagers and such varying degrees of what parents let their kids do. The last thing he said to me was, 'Please, Mom, just let me go.'"

And then there's Clare T., a mom of two in Boulder, Colorado, whose son was keeping up with his classmates in kindergarten and first grade, but she just felt like something was amiss. Each time she went to his teachers, she was reassured that everything was fine. Her gut told her that wasn't the case and had him privately tested. Turns out he is dyslexic and needed speech therapy, as well as occupational therapy for fine motor skills. "I'm so glad I listened to my instincts," she says.

Stories like these are common among moms. We've all heard that little voice in our head or felt that feeling in our stomach as we make decisions. But knowing when to trust your gut is a dilemma that moms know all too well.

What is Mom Intuition?

Gut feelings or intuition is the idea of making decisions without analytical reasoning. Experts say gut feelings are signals from the brain to the gastrointestinal (GI) tract and vice versa. Antonio Damasio, M.D., Ph.D., a neuroscientist and professor at the University of Southern California, believes emotions play a key role in decision-making, referring to gut instinct as somatic markers. It's an idea that past emotional experiences create future gut feelings.

Not all experts are convinced that mothers have an intuition specific to them, but they do agree that moms can be more sensitive or susceptible to particular cues. "Mothers are likely to have different priorities or biases that cause them to notice or focus on different things," says Sarah Blaffer Hrdy, Ph.D., anthropologist, and author of Mother Nature: Maternal Instincts and How They Shape the Human Species.

How is that explained? It starts in the womb. "The rise and fall of gestational hormones over the course of her pregnancy, along with the surge of oxytocin during labor and birth, prime mothers for responsiveness," says Dr. Hrdy. "A new mother's top priority is often to make sure her baby is safe, and she will have a low threshold for sensing anything amiss."

But sometimes what we think is mom's intuition, really isn't. Instead, it's anxiety disguised as our gut feelings. Shimi Kang, M.D., psychiatrist, author of The Dolphin Parent, neuroscience researcher, and mom of three, has studied the difference. "The trouble with our instincts is that when we're out of balance, they tend to lead us in the wrong directions," she says. "Intuition is the innate knowledge gifted to us by nature and can only be accessed in a place of calm awareness. Instincts can be wrong, but intuition is always right."

Judith Orloff, M.D., psychiatrist and author Guide to Intuitive Healing, agrees. "Intuition comes through as neutral, non-emotionally charged, and almost impersonal—just information," she says. "Fear, on the other hand, has a high emotional charge and may be related to anxiety issues the mother hasn't worked out."

How to Ease Your Anxiety in Motherhood

The first thing we need to do as parents is truly acknowledge if what we're feeling is real or is anxiety-induced. A good way to do that is to learn to ease your anxiety.

Dr. Orloff recommends a focus on wellness. "Develop a practice of self-care, as intuition cannot be assessed when we are in the stress/sympathetic nervous system," she says. She suggests breathing practice and practicing mindfulness, meditation, and gratitude as ways to be better in tune with yourself and reduce anxiety symptoms.

Another helpful technique? Dr. Orloff says it can be useful for moms to journal their top five causes of anxiety and be aware of when each surfaces in their lives. "Anxiety has a strong emotional charge versus intuition, which is typically neutral information," she adds. "Like an 'Aha!' feeling or like you're a witness watching a movie."

And sometimes, understanding the difference between intuition and anxiety can't be done alone. "If the mother tends to get overly anxious about her kids, a professional's help can be invaluable to help her decipher her own anxieties from true intuitions," says Dr. Orloff.

Family therapist Susan Caso, M.A., LPC, adds that therapy can help identify what is actually true intuition. "When clients first begin counseling with me, they often think I am going to provide answers, advice, and give them direction," she says. "My job is really guiding them to find their own answers. You could say that I am helping them awaken their inner voice, gain confidence in their own voice, and help it speak louder to them."

When to Trust Your Mom Intuition

It can still be challenging determining when we should listen to that voice, even when you know it's not anxiety-induced—particularly if there are others trying to silence or contradict it. Sometimes, we let what other people think start to drown out our own intuition.

"Our little voice can be quieted by fear—what others are doing, what others would say, what do others think I should do," says Caso. "We end up taking in too many other opinions and becoming more confused. A good process is listening to your gut and being grounded in its voice. There is nothing wrong with checking in with someone you trust, but not at the cost of losing your own voice completely."

Glennon Doyle, a mom of three and author of the New York Times best-selling book Untamed, believes all the answers—whether a parenting predicament or any life issue at all—lie within yourself. "In Untamed, I call it our 'Knowing,'" she says. "Sometimes trusting our 'Knowing' as a mother may mean being at odds with the ideas, fears, and concerns of those who love us—even our own mothers." And she adds this is important to do as it also becomes a lesson for our kids. "As we commit to living as models for our children instead of martyrs, we will eventually raise children who trust themselves, and who live from their own 'Knowing,' which, for me, is the most important value we can hand down to our children," she says.

At the end of the day, you know your children best. If you can rule out anxiety or fear as the foundation of a particular feeling or intuition, it's smart to trust that "mom gut" of yours. 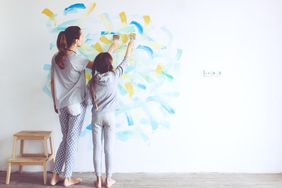