Like most things in life, moving in with family members of different ages has its pros and cons—fortunately, there are ways to ace the multigenerational living arrangement.

Ian McNish, 44, grew up in California but—ever since leaving for college in Arizona in the 1990s—he has largely lived apart from his mother. That is, until now.

In March, as it became increasingly likely that California would implement a shelter-in-place order, McNish began to worry about his 70-year-old mom. She fell into a high-risk category for COVID and she lived alone. Her social circle, which includes a choir, would likely be going virtual, and McNish wanted to make sure she wasn't lonely. He and his wife Krista, 30, asked her to move in with them and she accepted.

The McNish family isn't alone in bunking up. During the pandemic, about 1 in 5 people have either moved or know someone who has, according to data from Pew Research Center. For many, a move meant moving in with family members of a different generation.

Of course, multigenerational households aren't new to American society. Even before the pandemic, they were on the rise. Sixty-four million Americans (20 percent of the U.S. population) lived in a multigenerational home in 2016—a record number, according to other Pew data. One big reason: 50 percent of millennials, straddled with student loan debt and low wages, moved home after college.

Whether your multigenerational home was forged quickly out of pandemic-induced necessity or was something you planned with an older parent or recent college graduate for years, there are pros and cons to the living arrangement. Take a look at what they are—and how to make the setup work.

Moving in with a parent or having an aunt live with you certainly has its perks. A big one: You'll have an opportunity to get closer to family members, forge new relationships, and fend off loneliness.

"People have lost their jobs or not returned to school. I think the reconfiguring of families at this time helps to prevent the sense of isolation we all feel," says Erika Doukas, Psy.D., a clinical supervisor for family therapy at the Lenox Hill Hospital Psychology Internship program in New York.

Furthermore? "When you have adult children living at home, you're not telling them to clean their room," says Sarah Epstein, a marriage and family therapist in Philadelphia who writes the Between Generations blog for Psychology Today. "You can speak adult to adult and enjoy new experiences."

This may include cooking family meals together or bonding over a TV show that may not have been appropriate when the child was a teen. Krista, for one, began to see her mother-in-law as more of a teammate than her husband's parent; there wasn't a stack-order hierarchy when they were under one roof.

"It gave us the opportunity to rewrite some of the roles that had been set in stone for years, like who does food prep," she says. "We took the time to get to know each other and see each other in a different light. It's deeply gratifying."

More adults under one roof can also mean more help with child care—a sore point for many parents today. After all, in September alone, 865,000 women left the workforce, according to the U.S. Bureau of Labor Statistics. While some were laid off, others left to care for children or other relatives. "The crisis of managing full-time school and Zoom school is an impossible task," says Epstein. "Women are leaving the workforce in much greater numbers than men and if grandparents, great-grandparents, or siblings can get involved, that may be an opportunity for more people to keep their work."

Though there are pros, multigenerational households can come with their share of issues, too.

Having multiple generations under one roof might, for example, be disruptive to an existing family dynamic. "It can psychologically be difficult for a lot of people because in our culture we see moving out as a sign of growth and independence and coming of age," says Epstein. "Those who are choosing to move home may feel it's a step backward."

Sometimes, people regress into previous roles. "When adult children go home, it can be easy to fall into a child version of themselves," explains Epstein. "They may find themselves letting Mom do the laundry and cook for them." That can be fine if everyone is on board with it (maybe parents feel "useful" again). If not? It can breed resentment.

Space and privacy can also be issues. Krista, for example, was used to having quiet time with their dog each morning while her husband swam. When her mother-in-law moved in, she found herself having to be chatty during that period.

Older people used to living alone or having more privacy may also feel they've lost personal space. "Empty-nesters may feel their freedom has been disrupted," explains Dr. Doukas. Ditto for adult children who may feel their parents are prying into their personal business (asking questions about how late they're staying out or who they're dating).

And though child care assistance is helpful, parents and grandparents may clash over tactics. "Oftentimes, parents feel their rules are usurped when grandparents move in," says Dr. Doukas.

How to Make Multigenerational Homes Work

There's no such thing as a perfect situation, but it is possible to prevent (and work through!) issues in multigenerational homes to make the arrangement work for everyone. If you're living in one—or thinking about living in one—try these five tactics.

"Discuss what the expectations are from the get-go," suggests Dr. Doukas. "Everyone in the family should have responsibilities and contribute to the family." This can include who is paying for groceries and whether the original homeowner expects rent. During the pandemic, families might discuss what activities they are comfortable with, such as outdoor versus indoor dining, too.

If younger children are moving in? Parents and grandparents should discuss parenting styles. "It's useful to frame things in terms of what you do instead of what you don't do," says Epstein. "Instead of, 'Don't give my kid chocolate,' say, 'We want to make sure he gets fruits and vegetables today.'"

Ongoing conversations, such as weekly meetings, can prevent frustrations and resentment from bubbling up (when, say, adult children are leaving dirty laundry in the mudroom for their parents to take care of) and nip things before they escalate, says Dr. Doukas.

Also: Be OK being a little bit vulnerable in your chats. "Sometimes, I just pulled [my mother-in-law] aside and said, 'I know I'm not at my best right now. It has nothing to do with you. I'm stressed,'" says Krista. "Asking forgiveness of each other and being forgiving of yourself can help you get through."

Plan for your new normal

"It can be challenging to coordinate schedules and available spaces in a newly expanded household," says Dr. Doukas. Planning ahead is key. When Krista's mother-in-law moved in, for example, the family had a conversation about what days worked for who to do laundry.

Just remember: Situations are fluid, so flexibility is key. "Letting go of rigidity gives everybody a little more breathing room for error and for finding the best routines that work for most people, even if they aren't perfect solutions," says Dr. Doukas.

Remind yourself of the big picture

Quick: Why did you all decide to move in together? "Grounding yourself in the big picture will help you not get sucked into every small inconvenience or frustration," says Epstein. "The big picture provides perspective and gives you room to feel gratitude for the arrangement, even if it comes with its irritating moments."

Checking in as a family and talking about the collective experience of living together also gives everyone a chance to voice their view of the experience, she says.

Be open to new traditions

"Existing and new family traditions are important because they tend to foster a sense of family unity," says Dr. Doukas. "Simple routines can provide comfort and consistency to family living." This could mean making a weekly meal together or going for a walk Friday evenings to celebrate the weekend.

For McNish, as cases of COVID decreased in California at the time, his mother ultimately wound up moving out—but not before establishing some new traditions. The family now has a virtual Bachelor night, where they pick a rerun to watch together. "That's become a fun, new tradition that we never would have done without the pandemic," says Krista. 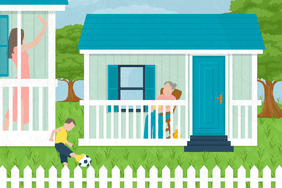 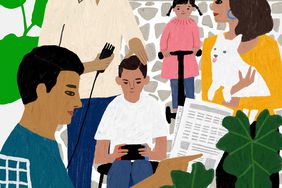