Nine parents within the United States Army launched a grassroots effort to create new policy around pregnancy and parenthood. The service branch listened and recently signed a new directive for senior leadership to follow. We can all look at this policy change as a beacon of hope.

Katie Cloyd
Katie Cloyd
For more than twenty years, Katie Cloyd has been writing about experiences as a woman living in a plus-size body. For the last five years, she has been a freelance writer, contributing personal essays, mouthy humor pieces, and researched articles to multiple national and global publications. Katie is a military wife and mom of three residing in Nashville, TN.
our editorial guidelines

In late April, the United States Army announced that Army Secretary Christine Wormuth had signed a new directive concerning pregnancy, postpartum, and parenting. For the first time, there is a clearly-defined, streamlined document in place to ensure that our soldiers never have to choose between their prenatal health, beautiful families, and the careers that they love. For a national organization that includes 400,000 parents and caregivers, it's about time.

Like many of history's most amazing accomplishments, a group of determined women made this happen. Not just any women: Moms who are American soldiers.

Just one year ago, the nine-person admin team of a Facebook group called Army Mom Life embarked on an incredible whirlwind of grassroots effort and effective collaboration to create new policy around pregnancy and parenthood. Like most parent groups on social media, members would ask questions and voice concerns about their shared experience in the Army. The admins quickly saw a theme in the complaints fellow Army parents and they submitted an informational document to the senior leadership of the Army. Not only did these Army moms use data from almost 9,000 soldiers who are moms to identify some of the biggest barriers in pregnancy and postpartum, but they also recommended line item updates to existing regulations.

Staff Sergeant Nicole Edge launched Army Mom Life in 2020 after having two children born during her military career. It was actually the loss of her first pregnancy in 2016, and the lack of built-in leave for miscarriage that first opened her eyes to the need for some policy revisions. Later, she was denied the opportunity to take a professional development course required for her to promote to Staff Sergeant simply because she was pregnant.

Many moms found solace in the group Staff Sgt. Edge started and have since shared their own stories:

Sergeant Carrie Vargas's baby was born needing a new heart. During her child's scary transplant ordeal, Vargas describes her leadership as "outstanding, compassionate, and empathetic," but she recognized that she was very lucky. At that time, there were no official policies in place to ensure that every commander would accommodate their soldiers as well as hers did when their child needed medical care.

Captain Dominique Dove is an Army administrative law attorney, but when she had her first child in 2019, she was a Battalion Human Resource Officer in Charge, as well as a Company Commander. She shares, "I ran until the day before I went into labor because I was afraid that I wouldn't get back in shape fast enough. After my pregnancy, I was required to pump in the field. It was then I realized there needed to be more protections for pregnant and postpartum soldiers."

Amy Kramer, special assistant to the Undersecretary of the Army, also played a key role in making these policy changes happen. She was the lead action officer and helped push it across the finish line, with the endorsement of Army Senior Leaders.

The directive in its final form covers the entire parenting experience from pre-conception through childhood. It provides soldier parents with flexibility for fertility treatments. It ensures that soldiers who experience a loss like Staff Sgt. Edge will not have to beg for adequate convalescent leave for miscarriages—and neither will soldiers whose non-military spouses experience pregnancy loss.

Soldiers who become pregnant will not have to focus on maintaining an unreasonable level of physical fitness during or just after pregnancy like Captain Dove did; the new policy outlines a change in the physical fitness standard, allowing a person an entire year to recover from pregnancy before taking their PT test.

Parents whose babies are born medically fragile like Sgt. Vargas's baby will not have to trust their leadership to choose compassion; the new directive encourages commanders to provide flexibility for childhood illness, even if it interferes with military duty.

Other changes, including deployment deferment during a child's early infancy, breastfeeding accommodations in the field for up to two years, and even paid leave for reservists are all in place because a group of smart, determined soldier moms refused to accept that they had to choose between being the best mother they could be and the best soldier they could be—and leadership who listened. Under the right conditions, a soldier can excel in their career and at home—and now the Army is making certain that their soldiers have the support to do just that.

"The Army really is putting 'people first,'" explains Staff Sgt. Edge. "It's not just a slogan; they really do care about families, and they are really pushing to normalize parenthood in the Army."

We can all look at this policy change as a beacon of hope. If a group of determined soldier moms can change the entire Army, any of us can choose to believe that change is possible in our workplaces and communities, too. 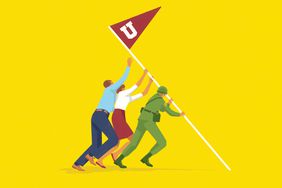 Is Military Service the Right Choice for Your Teen?