One-third of active U.S. service members are also parents. The personal sacrifices these families make every day are not always as visible as their uniforms.

In February of 2020, Akeem and Satia Bedeau were preparing to move from a military base in Hawaii to a new duty station at Fort Sam Houston in San Antonio, Texas. The Bedeaus, who are both trained medics in the Navy, had endured long periods apart when Akeem was deployed to the Philippines and Japan. They were looking forward to finally settling down, at least for a time, with their daughter, Neliah, and son, Nasir.

"The next place we lived in, we knew we wanted to buy a house," says Satia. "So to put one less stress on us with the move, my sister came from Maryland to pick up the kids and take them home with her for a bit." The children, then 1 and 3, were at ages where they could be stubborn. Satia hoped they would behave themselves for relatives they knew only from video chats.

When Neliah was born, the Bedeaus, who are Black, had been stationed in Portsmouth, Virginia. Satia's mother and sister had been close by, so they didn't have to go through the learning curve of becoming new parents by themselves. "When we got orders to Hawaii, it made my in-laws and my wife sad," says Akeem. "Our baby girl was 6 months old, so [Satia's] family went all out with a half birthday party just before we left."

What was meant to be a temporary arrangement for Neliah and Nasir—a stopgap until a house was found for the family in Texas—turned into 4 difficult months. Two days before Akeem and Satia were scheduled to leave Hawaii for their new jobs in San Antonio, and with the kids still in Maryland, the Navy put a stop to all non-essential travel because of COVID-19. Satia and Akeem enjoyed reconnecting after a few years of back-to-back deployments, but they missed their children. "One time my sister called me because my daughter had a very bad tantrum," says Satia. "She'd torn the railings off a set of bunk beds, pulled out all her drawers, and tossed out the toys. I'm crying, I'm upset and embarrassed, and I can't be there to talk to her or even hug her."

Of the 1.3 million active-duty members of the U.S. Department of Defense, more than one-third have children. From October 1, 2020, to September 30, 2021, 158,773 children under the age of 18 were impacted during deployments, according to the Department of Defense. Americans still trust the military more than any other public institution, but few civilians are aware of the personal sacrifices made by service members and their families every day: frequent moves, inflexible commands, the looming threat that a parent could be sent to war, or the other side of the world for a training exercise, on a moment's notice.

Villaphanh and Jose Hamilton, who serve in the Army in San Antonio, have also gone through periods of family separation. In 2019, Villaphanh, a human resources specialist, was sent to Saudi Arabia for 18 months, while Jose was away at officer training school. For 3 months, their 5 children were cared for by Jose and Villaphanh's parents in their home state of North Carolina. When Villaphanh, who is Laotian, left for Saudi Arabia, her youngest child Olivia was just a year old. "I feel like I missed a lot with her," says Villaphanh, "like her first word, crawling, walking." Villaphanh missed her twins' first day of school, too. Twins Alyannah and Brooklyn were born via emergency cesarean section at 26 weeks and Jose, who is Korean and Black, didn't meet them until 2 months later because he was on an assignment in South Korea.

Finding child care can be a constant challenge for military parents, especially when one or both parents have been deployed. At one point, Villaphanh had to find a daycare that opened at 5 a.m. so she could make formation in time in the mornings. "I made a relationship with the daycare close enough that if I was running late or knew a recall was going to happen, I'd give them a heads up that I need someone to be there," she says.

Now that the Hamiltons are together again, they are thriving on a routine. (It helps that Jose, a signals officer, can function on 4-and-a-half hours of sleep.) Both parents are aware that their lives could be upended at any time. "It worries me as a wife and a mother whether one of us or even both of us have to go overseas, what that's going to look like for our family," says Villaphanh. While neither she nor Jose thinks a deployment to a conflict zone is imminent, the question of who would take care of their kids if it happened is never far from their minds. Looking after 5 children, Villaphanh adds, is "a lot even for us."

It worries me as a wife and a mother whether one of us or even both of us have to go overseas, what that's going to look like for our family.

In Hawaii, the Bedeau family's situation for backup child care was equally complicated. "Both our families are working families," says Satia. "They can't just drop everything to help, but if I get called away tomorrow I need someone to look after my kids until my family can come and collect them." That's why the relationships you build with other service members are so close, explains Satia. "They're like cousins and nephews you adopt along the way."

Natalie Sneed, a medical technician in the Air Force, lives in San Antonio with her wife Tyreika Clark, who is also in the Air Force, and Clark's son, 12-year-old Rashad. Sneed, born on an airbase in California, dubs herself a "military brat," and feels that the benefits of her childhood outweighed the difficulties. She has many happy memories of growing up in Panama, where her father was stationed with the Air Force. "I would run over avocados from the avocado tree in our backyard with my brother's wheelbarrow," she recounts. Later her family was living on a German airbase at the time the Berlin Wall fell; Sneed still has a piece of the wall she keeps in a zip-lock bag. Of the seven times Rashad has transferred schools for his parents' work, says Sneed, "he may not get it now, but I know he'll be fine. He makes friends so easily because he's lived all over the nation."

Clark and Sneed, who met as drill sergeants, are both Black and identify as lesbians. In Clark's work as a scheduling manager, she says she is often approached by women of color who thank her for her leadership. A RAND corporation survey in 2018 found that 6.1 percent of people in the U.S. military identify as LGBTQ+; women make up just 17 percent of active-duty ranks, while 16.8 percent of service members identify as Black. "Representation matters," says Clark. "I've been embraced for who I am."

Initially, Clark struggled on assignments away from her son. When he was 1 and not yet walking, she was sent to Afghanistan. "To this day," says Clark, "Rashad keeps a pillow we gave him at the time with my photo on it." Clark felt a lot of "mom guilt" while in Afghanistan, and used the strong Wi-Fi in her unit's communication tent to video chat with Rashad daily. A second deployment when Rashad was 4, to Qatar, went more smoothly. "I had seen when I got back from Afghanistan how he didn't miss a beat," says Clark. "In Qatar, I didn't worry so much about the absence because I knew he would be fine, and I could focus on my mission."

When at home, which is currently San Antonio, Clark is equally clear-eyed about her purpose. "I treat my time like royalty," she says. "I'm up at 0300 to exercise and invest in me first before I can perform my duties to others." If Clark and Sneed reach the end of the day and think they can eke out a bit more togetherness, they will go sit on Rashad's bed while he plays games with his friends online. "For us, it's buying time," says Clark.

Reunited with their children in June of 2020, Akeem and Satia Bedeau now live in San Antonio, in a house they bought via Facetime from Hawaii. They're zealous about carving out quality moments as a family, too. While in Oahu, they'd head to the beach on Saturdays to pick up trash. "My daughter loves animals, so I'd have a baby strapped to me while she'd be saving the dolphins by collecting plastic," recalls Satia. These days, they spend weekends volunteering at the equestrian center on base. Last year, Satia had brain surgery and credits her "military family"—close friends from various duty stations—for helping them pull through. She strives to give her kids "as normal a life as possible" in spite of all the upheaval which comes with parenting in uniform.

Raising children and serving in the military may even involve some overlapping skill sets. Natalie Clark thinks her 16 years of active duty have helped her become a better mom because she prioritizes what's important, knows how to set appropriate expectations for others, and most of all, is prepared for the unexpected. "Parenting doesn't have a playbook," she says. "But our number one rule is we try and spend as much time together as a family as possible."

Read more here on how to support military families in your community. 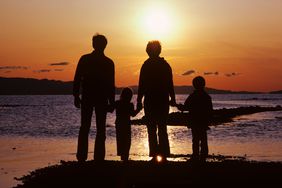