Every June, people around the country celebrate the LGBTQ+ community. Turning on any of these LGBTQ+ movies, shows, and songs is an easy (and fun!) way to set the stage for educational moments with your family.

It's been over half a century since the first Pride march in New York City, held on June 28, 1970, marked the one-year anniversary of the Stonewall Uprising. Every June since has presented Americans with an opportunity to celebrate the LGBTQ+ community. Sharing the tradition with your children, no matter their ages, can send an incredibly important, heartfelt message of love, appreciation, and affirmation.

"Our culture is more enlightened than ever, but there are still harsh realities and societal hurdles," points out Tom Jones, APC, MAMFT, a clinician at the Berman Center in Atlanta. "LGBTQ individuals still experience oppression, social isolation, rejection, insults, physical harm, and other discriminatory day-to-day actions that say to the individual, 'You need to change to be accepted.' Celebrating Pride confronts that message by saying, 'All of you are lovable and worthy of celebrating.'"

What's more, observing Pride can have "an immense impact" on LGBTQ+ family members, says Jones. "Tangible benefits of acceptance include reduction of shame, the further exploration of self, a more secure self, healthier emotional security, and higher levels of happiness and life satisfaction," he notes.

We rounded up some of our favorite LGBTQ+ movies and songs you can check out as a family in order to celebrate Pride together.

The following LGBTQ+ movies and streaming series are expert-approved to screen with kids during Pride month.

Diary of a Future President

On this Disney show, 12-year-old Elena, a Cuban-American girl, navigates middle school and her path to becoming POTUS. Jones says the show tackles ideas of sexuality and identity in a real, family-friendly way for all age groups.

"A major LGBTQ storyline includes the main character's brother, Bobby, developing feelings for his tennis teammate and friend, Liam," he explains. "Over the course of the series, you witness a young character coming to terms with his sexuality. The show offers modern and real character development plot points that allow for further conversation and is nice to see from a major production house like Disney , especially for younger audiences." Watch it on Disney+

The first children's cartoon, which you can stream on Amazon, to be created by an openly transgender person (Shadi Petosky), this Amazon original includes trans youth, gay dads, a lesbian folk duo, and more, points out Jones. "Additionally, many of the characters on the show are voiced by LGBTQ talent and the show was created with the specific intention to represent the LGBTQ community from the start," he says. Watch it on Prime Video

The kids' cartoon show follows a boy named Lincoln Loud who has five older sisters, five younger sisters, and one bathroom. It could offer an opportunity to discuss a variety of topics, as the show has a character with gay dads, explains Shane. Watch it on Prime Video

Shane recommends this YouTube channel, hosted by Lindsay with the help of their best stuffed friend, Teddy, features videos that teach "what gays mean, what LGBT stands for, what's up with marriage equality, and more."

Shane recommends this TLC reality series about transgender author Jazz Jennings, who also wrote a children's book called I Am Jazz that is based on her real-life experience. "It's great for family viewing and family discussions," says Shane. Watch it on Prime Video

The Freeform TV series follows a blended, multi-racial family of a lesbian couple. "The series does a good job of including storylines that follow the lives of the children portrayed and what they're experiencing for their ages, as well as offers one of the more diverse family units on modern television led by a LGBTQ couple," says Jones. Watch it on Hulu

This 2018 coming-of-age romantic comedy focuses on a closeted gay teen who's coming out to his friends and family. "What's so important about this movie is it speaks to a generation that in many ways is the first to experience a heightened level of acceptance for identifying as a member of the LGBTQ community," explains Jones. "That's not to say it doesn't come with its own hardships and hurdles, but it highlights changing cultural and societal norms that for so many years prohibited many people, especially high school-aged students, from feeling comfortable and able to identify as their true selves. It's important for generations of all ages to see the trials, tribulations, and triumphs of their own life experiences portrayed on-screen." Watch it on Prime Video

The Family Stone, a 2005 dramedy starring Sarah Jessica Parker, Rachel McAdams, and Diane Keaton, integrates LGBTQ+ storylines into the craziness of family drama of an extremely accepting and open group of family members, explains Jones. "While this may not seem like a huge deal, what it signifies to audiences is that LGBTQ topics aren't taboo, outliers, or something to shame," he notes. "The characters' abilities to treat their family members just like anyone else, no matter LGBTQ or straight, allows audiences to see and understand that everyone is exactly the same, no matter how they identify. Plus, even though it takes place at Christmas, you can watch it year-round." Watch it on Prime Video

Jones loves that in this 2019 cult classic comedy, featuring "an all-star, diverse, and hilarious cast," the protagonist identifies as a lesbian. "While so many mainstream LGBTQ films and entertainment focus on gay male leads, Booksmart features the story of another type of LGBTQ character that so importantly expands the conversation and opens the door for many more stories, themes, and LGBTQ material to be told in a very upfront, modern, and refreshing way," he explains. Watch it on Prime Video

LGBTQ+ Songs to Add to a Pride Playlist

Add these tracks to a celebratory playlist, and you'll be inspired to dance and have a discussion.

"Born This Way" by Lady Gaga

"A fun, funky, loud, and proud anthem, this song says exactly what it means: 'No matter gay, straight, or bi, Lesbian, transgendered life, I'm on the right track baby, I was born to survive,'" says Jones. "What a perfect song to sing together as a family and celebrate everyone's differences and similarities to highlight the beauty in being authentically yourself. It's an inclusive and generational Pride anthem."

"Not Ready to Make Nice" by The Chicks

Shane says this track "may validate some experiences with bigotry."

"Don't Stop Me Now" by Queen

"This song offers an unforgettable chance to educate family and friends on how many LGBTQ musicians played a monumental role in shaping the industry and history of music, including Freddie Mercury," explains Jones. It can also present an important lesson around how many people of notoriety, including Freddie Mercury, weren't able to publicly come out or speak about their sexual identity as their true selves, notes Jones. "For many, the price of success depended on staying in the closet, or so they thought or were told to believe by others," he says.

"I'm Coming Out" by Diana Ross

The 1980 disco hit by Miss Ross has become an anthem for, well, coming out. As Jones jokes, "Do I even need to explain this one?"

"Come to My Window" by Melissa Etheridge

Lesbian rock star Melissa Etheridge publicly came out at the same time this album became a hit, and it quickly became an empowering theme for the gay community, points out Jones. "According to Melissa, in many ways, the theme of the song bypassed its original meaning and became part of mass consciousness," he notes. "That's important because it's a beautiful thing to speak with LGBTQ people and allies alike who see the music and message for what it is: a song about love, life, and longing—no matter how you identify."

Shane advises parents check out anything from these country artists. "Yay for being out in the country music world," she says. "Let's all affirm that!"

No matter the unique way your family opts to celebrate LGBTQ creators and history, know that exploring Pride as a family is bound to have a positive, long-term impact on your children. As Jones notes, "In a world so entrenched in judgment, you have the opportunity to model acceptance and love. There's no more powerful agent of change than that." 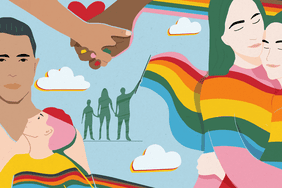