Parents, you might not be the first person to know everything about your child's life, especially regarding their gender and sexual identity, but that's not a bad thing. Here's why they might tell their friends first and how your reaction can make all the difference.

I recently came out as bisexual at the age of 23—first to my friends and then to my significant other.

Breaching the topic of my sexuality with my parents, however, was more difficult. It isn't that I didn't want to tell them, but rather that I didn't feel I could without consequences to our relationship.

A majority of those surveyed said they did not come out to their parents first because they were concerned about the reaction. Others said they were still exploring their identity and feelings and did not want to involve their parents too early.

I want to help parents and guardians understand that if your child decides to come out to you, it means they trust you to really know who they are—it doesn't matter who they told first.

Their Decision to Come Out Isn't Always Planned

Telling my friends that I'm bisexual wasn't even a clear-cut decision. I was just thinking out loud, mentioning that I also happened to be attracted to women romantically, when my friend was in the room. It wasn't a dramatic event, but my friend, without skipping a beat, said that she was proud of me for speaking my truth.

I don't regret coming out to my friends—they helped me to talk through my sexuality. This gave me the necessary time to understand my feelings before I explained them to my parents.

My friend Juniper Scott, on the other hand, came out to her mom during a heated argument. She says her mother, rather than listening, invalidated Scott by falsely claiming that bisexuality is something that will pass with time. For Scott, having an alternative sounding board first could have made all the difference.

"It hurts when the community dismisses or attacks your identity as a bi person, pushes you to the fringes, stereotypes you or denies who you are as a 'phase' or a 'lie,'" wrote Molly Maher for Stonewall.org, an organization aimed at supporting the LGBTQ+ community in the U.K.

Coming Out Isn't A One-Time Thing

Just because you're not the first person your child comes out to doesn't mean that the first time they tell you isn't important.

It may sting to know other people know something so personal about your child before you, but instead of feeling jealous, frustrated, or disappointed, be thankful that your child has a network of supporters who helped them navigate this discovery.

Sharing the news to different people in their life can stir up unexpected reactions—some of which aren't positive. I personally felt more comfortable talking with my friends about my bisexuality before my parents because I already knew that my friends were strong allies, and many also belonged to the LGBTQ+ community. It was easiest to first come out to people who could relate to my situation.

As your child forms different friendships and relationships within their lifetime, they will still need to share their identity with others. Each time that they share this piece of themselves, members of the LGBTQ+ community are opening themselves to uncertainty and possible rejection. This process can be exhausting and scary.

How parents react sets the tone for trust and acceptance going forward. For some children, coming out to a parent or authority figure could have consequences regarding housing, personal safety, or employment, according to the Human Rights Campaign (HRC). Even if you are unconditionally accepting of your child, they might have anxiety about coming out based on stories they've heard from friends or seen on TV.

"Whether you're a teenager or an adult with a family of your own, coming out to your family can be scary," the HRC said. "While many parents and family members will react with support and affirmation, some won't, and family rejection can be painful."

It doesn't matter how many other people your loved one has come out to; what matters is how you react for the first time they come out to you.

Some key people in my life were disappointed and frustrated to learn that they weren't the first to know. They weren't upset that I'm bisexual, they were mad about the timing and mistakenly assumed my decision not to come to them first was personal. They told me they felt like they didn't know the real me. There is so much more to a person than sexuality or gender identity and this was disheartening to hear.

After briefly mentioning the idea of bisexuality around my parents, their reactions and misguided opinions discouraged me from being fully open about my own feelings to them at that point. They likely didn't understand enough about bisexuality to host a conversation about the topic and their comments were indicative of bi-erasure, the doubt that bisexuality is valid or even real. I wasn't confident enough yet in my own identity to not be validated for who I am.

Showing acceptance and unconditional love to your child from the moment they come out can benefit their emotional and mental health. LGBTQ+ youth who are supported by their parents when they come out are less likely to suffer from mental health issues, drug abuse, and sexual health complications, according to a study published in the U.S. National Library of Medicine.

Dwelling on who your kid might have told first about their identity won't help them in any way. Their journey isn't about you. As a parent, your job is to support them and nurture healthy personal development.

Coming Out Can Be Hard At Any Age

Sexuality is often stigmatized in American culture. During sex education in public schools, kids are rarely taught about healthy heterosexual romantic feelings, not to mention the lack of visibility of queer relationships. It's no surprise that sometimes kids will turn to their friends later in life for a sense of what is healthy, normal, or acceptable in society.

Coming out to family members could be daunting for young adults and teens. By telling a friend before parents, the child could be testing the waters of how someone might react. You can make new friends who are more supportive of an LGBTQ+ identity. But, there is more at stake if a parent doesn't react positively to the news.

As your child is exploring their own relationship with gender and sexuality, their place in the LGBTQ+ community might change. While coming out to their friends can help them have healthy conversations and let them explore who they are, coming out to you might make their new label feel like a permanent one. This might not be something they are not ready to do just yet.

When your child decides to come out to you as a member of the LGBTQ+ community, it means that they're extending a metaphorical olive branch. They've chosen to deepen your parent-child relationship about identity, love, and life. Don't dwell on who they might have told first, because it doesn't matter. Focus on their effort to include you in their life. 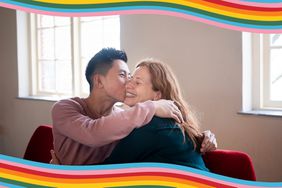