When children and teens come out as nonbinary or transgender to the adults in their life, they have to do a lot of internal work to understand how they fit into the world again. We need to think about gender differently so our children don't need to break through the binaries.

When my friend Ruby*, now 16, was a child, they didn't understand why they had to put a shirt on for the plumber. Ruby's favorite outfit was a pair of orange basketball shorts—no shirt or shoes—which they happily wore around the neighborhood. "I was like, Why do I have to put on clothes for this plumber?" Ruby tells me. "And my parents were like, You just have to." Ruby, in first grade at the time, was actively noticing what many adults struggle to grasp: that the rules we impose upon people according to the gender binary are arbitrary.

At the age of 13, after years of feeling that the word girl didn't fit them, Ruby encountered the term nonbinary on the internet. As Ruby explored transgender and nonbinary culture on YouTube and Instagram, they felt that they had finally encountered the language they needed to describe themself. For Ruby, being nonbinary means that they can can live outside the confines of gender. Ruby tells me that "not subscribing to the binary lets me be free and move throughout the world in a more fluid way."

Alok Vaid-Menon, author of Beyond the Gender Binary, writes, "The gender binary is a cultural belief that there are only two distinct and opposite genders: man and woman. This false choice is not natural—it is political." Author and activist Jeffrey Marsh points out that "there have been nonbinary people in every culture that has existed on earth," though mainstream American culture is just beginning to name and recognize nonbinary identities.

Sociologist Tressie McMillan Cottom recently observed in an interview with Ezra Klein that this current generation of youth is putting into practice principles that were once only theoretical. "You've got young people who said, wait a minute. Gender is a spectrum? OK. I'm [going to] live it like a spectrum."

As a queer person in my forties who has recently begun to assess where exactly I fit in the gender spectrum, Cottom's comments resonated for me. Over the last ten years, young people have taught me a lot about gender just by claiming the space to be who they are. In my community college classroom, more and more students are using they/them pronouns. When shopping at my local comic book store or even Target, I notice that clerks often wear pins that state their names and their pronouns; often those pronouns don't match what I would have assumed from a quick glance. It's a small detail that has made me more cautious about the assumptions I project onto others. As Cottom says, "We've got a choice. You can become that person within your generation who lives in that uncomfortable space [of learning], or you can become the person who resists it."

Habits Form Over Generations And Can Change

Like many parents, I'm working to inhabit that learning space. Though I've long understood that a person's biological sex does not determine their gender, I find that it's taking years of concerted effort to rewire my brain so that I don't immediately assume someone's gender or pronouns based on a quick glance. More and more, I find myself hesitating before using pronouns. Do I know for sure what this person's pronouns are? I ask myself. It's an internal dialogue that slows me down in a productive way.

Ruby has also borne witness to this work, noting: "When you come out as nonbinary or transgender to the adults in your life have to do a lot of internal work to understand how they fit into the world again. Because when you shatter someone's reality like that—something that they've grown up with, something they've thought to be fact—they also have to really question how the world works and their own place in it."

"We're immersed in this binary story about gender that requires us to do some intentional unlearning," says Talcott Broadhead, a social worker who specializes in transgender liberation and author of the book Meet Polkadot. Broadhead believes that children's books offer parents one tool to begin rethinking gender concepts at a fundamental level.

Broadhead emphasizes that in an ideal world, parents would be relearning gender before they have kids or alongside their children as they grow up. They emphasize that it's important not to "drag [transgender and nonbinary kids] along for the ride," or to use them as a sounding board for their own confusion as they evolve towards a more liberated understanding of gender.

Ruby reports that when they came out as nonbinary four years ago, their parents were unfamiliar with the term. "It's difficult when I have to explain myself to adults," Ruby says. "It makes my identity feel less valid." They offer the following advice to parents of nonbinary and transgender children: "It's great if you do the research on your own time and not have your kid be your primary resource."

Melissa*, the parent of a nonbinary teenager and a women's studies professor, points out that even parents who've been steeped in queer and feminist culture still need to stretch to meet this moment. "I can't just be self-satisfied and say [as an academic] I know what gender is, so I'm fine. Because I actually don't." Melissa describes her child's peer group as being playful with gender expression—often combining elements that have been labeled masculine or feminine—where her own generation was more rigid. As Melissa watches her child embrace nail polish and lipstick alongside ties and fedoras, Melissa finds herself experimenting with her own gender expression.

Changing Rhetoric is a Form of Respect

It's worth noting that gender identity and gender expression are two different concepts. Each person's gender identity tends to be fixed from childhood, though we may not develop language to name it until later in life. For example, Ruby felt strongly that they weren't a girl years before they learned the term nonbinary. Gender expression, a feature of social gender, is often fluid and refers to the ways we dress, style our hair, and present ourselves through mannerisms.

As I work to liberate myself from a binary understanding of gender, I find myself taking stock of both my gender expression and identity. Some days I feel most myself in a flannel shirt and worn jeans. Other days, one of the few dresses in my closet calls to me and wearing it feels like home. Though my gender expression is somewhat fluid, any time I've tried to wear makeup, I feel like I'm putting on an uncomfortable costume. When I take inventory of my gender identity, I find that my relationship to the word "woman" and the pronoun "she" has become just a little bit fraught; it describes me, but it doesn't contain me. It feels like a shirt that's just a little too small.

While many of us who are over thirty grew up using only the binary pronouns "she" and "he,"
"they" has been used as a singular pronoun indicating gender neutrality for centuries. The gender-neutral pronouns "ze/hir" were coined in the mid-nineteenth century and are still in use. More recently, the singular "they" has been adopted by many nonbinary people and, finally, recognized by the culture at large. In 2019 Merriam-Webster not only added this use of "they" to their dictionary but named it their word of the year.

While I'm just beginning the work of interrogating my relationship to gendered pronouns, Ruby has made it clear for years that their pronouns are they/them. Still, many of the adults in their world continue to misgender them, and Ruby explains the effect this has: "Pronouns are how you show respect to people. When you use the correct pronoun for someone you're acknowledging that you are seeing them the way they want to be seen." Adults often learn and initially acknowledge Ruby's pronouns, but then go on to refer to them as "she," a mistake that provokes physical discomfort and a feeling of erasure.

Vaid-Menon acknowledges that "it's difficult to shift habit and language," but goes on to point out that transgender and nonbinary people are also doing this work. "We were not magically bestowed with these knowledges and sensibilities, we are coming into them through struggle, trying to excavate over time a more kind and gentle way to recognize and affirm ourselves and one another." Vaid-Menon invites us to "heed our invitation to do this work and receive it as a blessing, not an inconvenience."

Indeed, I find that as I shift my language to make room for nonbinary people I know and love, I find extra space for myself there—space to grow into truer self-expression and an expansive understanding of identity and gender.

Jennifer Berney is the author of The Other Mothers: Two Women's Journey to Find the Family That Was Always Theirs. She lives with her wife, two children, and many animals in the Pacific Northwest. 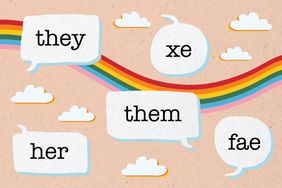 Gender Pronouns Explained, And Why You Should Absolutely Respect Kids When They Change Them