Your child's label within the LGBTQ+ community is a part of how they live and understand the world. By sharing this with you through coming out, they are allowing you to know their true selves and making it easier for you to support them.

When I came out as bisexual in 2013, I got this common response: "I don't care." It felt like an updated, progressive response to coming out. People weren't saying being bisexual was bad or even good; it's neutral, irrelevant, no more important than me changing my shoes or getting a new haircut. When I came out in the 2010s, the idea was that the best response I could hear was that the person I told simply didn't care. "Why would I care who you sleep with?" a parent might say to their child, laughing. The intentions were good, and yet, to queer young people like me, it still didn't feel quite right.

When I came out to my mom, she was confused, and I can't blame her. I was just as surprised by my bisexuality as my mother was. If anything, being "closeted" only existed for about a year before I flung the door open. Coming out was tense for both of us and her reaction is something she apologizes for now. She often says she wishes she'd responded better, but I'm glad that my queerness has been an ongoing learning experience for both of us.

As I've talked to queer friends and my parents about why coming out is still important in 2021, I've tried to explain that being queer is about so much more than who you sleep with. To me, being queer and bisexual is about how I experience the world and envision my future. I never wanted a husband as a kid, but I want a wife. I never wanted to be a straight, married, soccer mom, yet the idea of being one of two moms to my kid and showing up to their soccer game with clementines and lemonade plucks at my heartstrings.

Generation Z is increasingly queer, with Gallup reporting that one in six Gen Z-ers identify as LGBTQ+. The United States walks a unique line of open and resilient dialogue about LGBTQ+ culture and identity despite the continual political backlash. Films like Love, Simon explode onto the scene at the same time that trans kids are facing an onslaught of attacks; young adult novels are increasingly queer at a time where politicians take it amongst themselves to force teachers to "tattle" on students who don't follow strict gendered lines. We're in a place where we can really reconsider what it means to come out and why it matters. Parents today who are more open and willing to have these conversations might still fumble how to reassure their children that they stand alongside them.

Friends of mine have parents who can't accept their queer identities. Their parents don't just lose out on weddings and talking to their children about dating—they are missing out on their entire lives.

That's the double-edged sword of hearing, "I don't care if you're gay." The concept of one's identity not mattering in terms of where one falls on the LGBTQ+ spectrum is, ultimately, deeply assimilationist. It assumes that the goal is for everyone to be the same. When we say that we don't care if someone is gay or straight or transgender or cisgender, we're trying to be kind, but ultimately we're doing the very opposite because we aren't seeing them as they're telling us to.

This is doubly true considering that being heterosexual and cisgender is so baked into our society. If you don't "care" that I'm bisexual, is it because you are accepting of my queerness or just assuming I will default into the heteronormative narratives that are comfortable for you?

When we tell our children we don't care, we're automatically foisting expectations upon them and ignoring the differences to those expectations. Instead we need to sit and revisit every single assumption we had about our children, our families, and our roles in their lives. If your daughter tells you she's a lesbian, or your son says he's bisexual, it is a big deal. Not because it's bad that they aren't straight, but because they're offering you a beautiful, vulnerable chance to see them as they see themselves and to imagine the sort of life they want and will lead.

When you identify as LGBTQ+, your life is materially different. My life doesn't look or feel straight because it isn't—I've lost relationships and built new ones. I've had incredible experiences as well as heartbreaking ones. And when I'm afraid, excited, or lost, it's all been through a lens of queerness. Because I'm Black and queer, there are specific experiences we'll have that our white, gay friends won't understand. If we have children, will we both get parental leave? If we want to adopt, will the state we live in allow us to?

When I talk to my straight, white mother about falling in love and building a life with my partner, we're figuring out, together, what my life could look like, and we're doing so because I don't have an example in my personal life of a person like me with a partner like mine. There are no guidelines; we are so far outside of the "norm" that we're making it up as we go. It's on us—me and my partner and, luckily, the support of my parents and family—to dream it.

Friends of mine have parents who can't accept their queer identities. Their parents don't just lose out on weddings and talking to their children about dating—they are missing out on their entire lives. To be queer is an existence that goes far beyond who you date or sleep with. It's a way of living and understanding the world. Ignoring the way that identity shapes our lives, and that of our children doesn't do anyone any favors. All it does is mar the glitter that makes our lives our own.

Despite what film and television may suggest, coming out isn't a singular event. Instead, it's a lifelong process. It's negotiating when and where it's safe to be yourself. It's reckoning with the way that being queer intersects with race and culture and religion, and trying to sort through it, sometimes with support from your parents, sometimes with support from your chosen family, and sometimes entirely in solitude.

Coming out isn't just the sharing of a quick fun fact; rather, it's an ask for support, love, and understanding. My coming out was telling my parents, "I might need your help with this. Will you learn with me?" And even though I was certainly much too nervous to explain it that clearly at the time, I remain grateful for my parents, teachers, and friends' parents who took charge and did their own research. They went to Google to figure out how to support me. They learned from other parents who had walked similar paths when parenting queer kids.

When your kids come out to you, please sit and think about what that coming out means beyond romantic relationships. It's an invitation to really and truly understand their kids—and that's an honor. 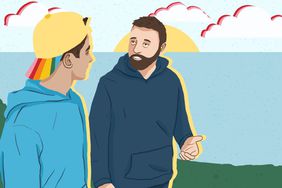 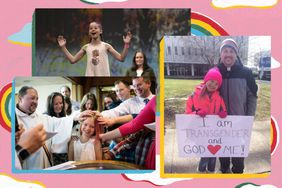