After two unsuccessful rounds of IVF and a miscarriage, Tracy Caliendo turned to surrogacy to expand her family. What happened next made the family of three a family of seven.

Tracy Caliendo’s journey to motherhood began much like a lot of other women. She was thrilled when she welcomed her oldest son, Hunter, now 12, but longed to grow her family with her new husband Pete Pasetsky. However, Caliendo, who turned 40 around the time they began trying to conceive, found getting pregnant was a lot more complicated this time around.

After trying to conceive naturally, Caliendo turned to in vitro fertilization (IVF), initially with painful results.

“We did two rounds of IVF completely unsuccessfully,” she says. “[On a third round] I actually did get pregnant but I had a miscarriage. By the fourth time, I just felt so uneasy. I told my husband, I would really like to have a surrogate because something doesn’t feel right with my body.”

Fortunately, however, Caliendo learned that she was pregnant after her fourth round of IVF. But she still couldn’t allow herself to get excited about the news for fear that this pregnancy would also end in heartbreak. What she did next is where her path to expanding her family diverges from others.

“Literally, people think I'm crazy. But that same day I found out I was pregnant I thought, ‘If I lose this pregnancy this is going to be too emotional for me,’” says Caliendo. “I'm going to call the surrogacy agency and tell them I want to move forward.”

Needless to say, the agency was surprised to receive the call.

“They were in shock,” laughs Caliendo. “They said, ‘But you just found out you’re pregnant!’ I said to them, ‘I just want to hedge my bets. I just want one of us to go full term and have a baby.”

Often times with surrogacy you have to wait for a match. In Caliendo’s case, the fates aligned and the agency told her that they just had a family back out but they had a wonderful surrogate who was essentially ready to carry a child.

“We met one another, instantly kind of fell in love with each other and it was like, ‘Let's do this,’” she says.

Incredibly, Caliendo and Pasetsky learned that the surrogate was not carrying just one baby for them, but two—twins! Meanwhile, Caliendo was fortunate enough to carry a baby to term herself. Because the surrogacy process happened so quickly, there is only a four-month age difference between Harlow, the daughter Caliendo carried, and the twin girls, Piper and Presley, the surrogate carried for them. Yes, try wrapping your head around that math. The family grew by three babies in a very short period of time.

When 'One More Baby' is Quintuplets: 'We Became a Family of Nine Overnight!'

“Now we have these tiny babies at home and we're trying to deal with, basically, triplets is how we're handling the situation,” she explains. “I started an Instagram account named Almost Triplets NYC to document everything.”

If you thought having three babies four months apart was the main plot twist in this family’s incredible story, grab some popcorn. About three months after the birth of the twins, Caliendo noticed she was looking a little bloated.

“I found out I was three months pregnant,” she says. “I didn’t even know. I had a growing belly, a pouch, and I just kept assuming something was wrong. I actually told everybody, “Look at my tummy. This is so strange. Is this what happens after a second baby?’ Not one person asked the question, ‘Do you think you’re pregnant?’ The idea seemed so far-fetched.”

While others might go into full-on panic mode at the sight of a positive pregnancy test with a tween and three small babies at home, Caliendo says they feel unbelievably lucky.

“When you go through fertility problems and your biggest dream is to have a child and then to end up with four more, you just feel over the moon,” she says. “We do not take these kids for granted.”

While pregnant with her fifth child, a son named Dylan, Caliendo learned she had a condition called placenta accreta. According to Mayo Clinic, this occurs when the placenta grows too deeply into the uterine wall, which is very dangerous for the mother. The couple found a placenta accreta specialist who let them know the process would not be easy, but they would monitor Caliendo closely to see how far they could safely get in the pregnancy to have the child and keep her healthy. At 26 weeks she found herself in the hospital until Dylan’s birth at 29 weeks.

“We feel like we defied the odds, because we have this child who is here with us who is the sweetest thing ever and he's a complete warrior,” says Caliendo. “He had some natural preemie issues which we worked through but he was diagnosed with congenital scoliosis. When you come out three months early, unfortunately things that should be developing that last trimester don't and his spine didn’t fully develop.”

Congenital scoliosis, a bone condition, is something the parents will have to monitor closely, but Caliendo’s voice is full of hope when she says Dylan is happy, healthy, and, indeed, strong.

“When you have a preemie, you kind of do away with all of the milestones,” she says. “You just want them to be happy and strong.”

As a family of seven, this brood is making it work at home in New York City. Caliendo makes a point of carving out quality time with Hunter, with routine check-ins to make sure he’s thriving amidst the baby chaos. The little ones are on a pretty strict schedule, going down for routine naps at the same time because, as Caliendo points out, they don’t really have a choice. Four overtired kiddos would prove to be complete anarchy.

“Your kids will take over,” she laughs. “There are some times when I’m like, ‘We’re losing control!’ I put them into their cribs when I feel like they’re taking over to separate them. They know when they’ve got us!”

To keep up with the family, follow them on Instagram @almosttripletsnyc, where Tracy Caliendo documents everything from their family outings to home life. 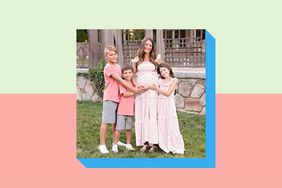