It's often reported that moms carry a bulk of the weight of parenting alone, but research shows that's not the case. By leaving dads out of the conversation, we are adding onto both the stress they feel and the pressures moms face.

Parenthood is full of wonder. I consider it life's greatest experience for those who choose to enter into it. But it can also be exhausting. Who among us doesn't, on some level, stress and worry about our children constantly?

Now, due to the COVID-19 pandemic, the burdens of parenthood have gotten even tougher. And that's true whether you are a mom or dad.

"It feels like my mental load weighs as much as my house," says Ryan Miller, married father of three in the Sacramento area. As sole breadwinner, he carries the stress of trying to hold onto his job amid rising unemployment while also trying to handle half of everything at home. "I work long hours, but my mind goes even longer. At night, my brain spins out: How am I going to meet my challenges and put out the necessary fires while preventing new ones?"

Ryan is quick to say his wife, Sarah, carries her own "immense responsibilities and mental load." It's not a competition; it's a shared responsibility.

To people who have heard the "mental load" is carried by women alone (or "almost completely" alone), Ryan may seem like an exception. But he's not—in fact, he's typical. Until dads are appropriately included in the "mental load" conversation, it will continue to be near impossible for dads and moms to get the support they need to be equally involved caregivers and relieve the overwhelming pressures and stressors placed upon them.

Dad Shaming is a Thing: More Than Half of Fathers Say They Face Criticism of Their Parenting

The Realities of Modern Dads

It was while working as an on-air fact-checker at CNN that I discovered it wasn't just politics that was filled with misleading data; so were discussions and portrayals of modern families. That was especially true for the most widely misunderstood and under-researched part of the modern family—dads.

Stereotypes of lazy, incompetent fathers are everywhere. A 2019 survey by Promundo and Dove Men Care (with which I partner on research and projects) found that women across several countries, including the U.S., Canada, Argentina, and Japan, are even more bothered by these stereotypes than men are. And the reality is, statistics on dads bust the myth.

Dads are also far more involved at home than stereotypes suggest. For example, a 2017 Men's Health poll shows men and women split grocery shopping duties. A recent study for the Council on Contemporary Families found men are doing more housework and child care during the pandemic than before.

Workplace culture is, sadly, often keeping this as the norm.

From the time their children are born, many dads are punished in the workplace for prioritizing time with their families. In my book All In, I explore studies showing men have been fired, demoted, or lost job opportunities for seeking a flexible schedule or taking paternity leave. In the Promundo/Dove Men Care survey, 85 percent of fathers said they'd "do anything" to be more involved at home, but their families can't afford for them to risk their jobs.

So, many couples are left with no real choice. Women are often pushed to stay home and shoulder more of the unpaid work, which can hamper their careers. It's the same problem that led to my legal battle for fair parental leave so I could care for my preemie daughter and sick wife.

What does this mean for the "mental load"? Different studies use different definitions. Often, the term refers to remembering the tasks that keep a household running. When defined this way, given the differences I've described, it's clear that moms handle more, but certainly not all of it.

But these tasks aren't the only things that can cause stress and add to the mental load of parenting. A 2019 survey commissioned by Movember found nearly a quarter of dads feel isolated after becoming parents, which can increase stress. Men also reported feeling tremendous pressure to be the best fathers they can be while still handling financial responsibilities and more. Many had lost sleep.

So it's no surprise that, in recent years, studies have found men and women experience about equal stress. Now, new data shows the same is true for parents during COVID-19.

"Nearly half of parents rated their stress level as being between 8 and 10 on a 10-point scale, while 28 percent of adults without children said the same," the American Psychological Association (APA) reports. When I asked the APA for a breakdown by gender, they found there was no "statistically significant difference" between mothers and fathers.

Meanwhile, a meta-analysis of 250,000 people found that "men and women generally do not differ" in how much work-family conflict they report. Men are "silently struggling … but no one is acknowledging it," says lead researcher Kristen Shockley, Ph.D.

Research does show that women worry more on average, which researchers attribute to a combination of biological and social factors. But the idea that these differences are a result of men not pulling their weight misses the big picture. And because people are unaware of men's stress, they often don't recognize the warning signs in men who are really suffering.

Many men have told me they're afraid to open up about their mental health because they don't want to offend women, who they're convinced must have it worse. So they fail to get help. Men are less likely to seek mental health treatment, and far more likely to die by suicide. In one study, nearly 10 percent of men reported experiencing "daily" depression or anxiety, but only 1 in 4 of them spoke with a mental health professional. Another study found that the rate of depression in men may be undercounted because men are likely to exhibit different symptoms.

It's time for this problem to come out of the shadows. All good parents love their children, work hard, and carry a burden. To lessen that burden, we must stand up together against backward expectations—and make clear, once and for all, that we're all in this together.

Parents.com dives into the mental load—the burden to do it all that comes with parenting—and how the labor imbalance is impacting families. Read more here. 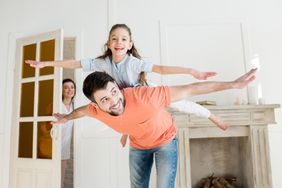 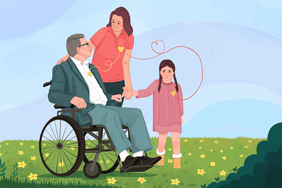 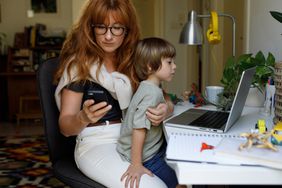 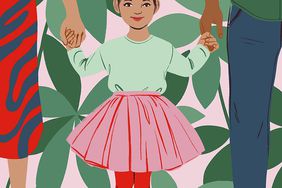