You can't knock free babysitting, but sometimes parents overstep boundaries in their efforts to help. We solve the new problems you may face with your folks.

Ten minutes after we brought our newborn son home, the phone rang. My husband's mother wanted to see her grandchild, Eric, and said she'd be over for dinner at 6 P.M. Was she kidding? My MIL had never invited herself over. Why would she assume that Aaron and I wanted company on our first night flying solo as parents? I told her she was welcome to come over the next day, and she agreed -- reluctantly.

But in the months that followed, our days were as much about managing Aaron's mother as they were about bonding with our sweet little boy.

Turns out my MIL's behavior is more the rule than the exception. "The birth of a baby can wreak havoc on intergenerational relationships," says Scott Haltzman, M.D., author of The Secrets of Happy Families: Eight Keys to Building a Lifetime of Connection and Contentment. "Grandparents often expect unlimited access to their grandchild and presume new parents will follow their advice," even if it's dangerously outdated. Becoming a grandparent also puts your parents and in-laws on the periphery, a place many of them don't want to be, adds Debra Gilbert Rosenberg, author of Motherhood Without Guilt. They may have a hard time accepting that the family you've created is just as important as the one you grew up in.

It's tough to know how to respond when grandparents question your judgment, issue orders, or make seemingly unreasonable demands. And if you rely on the 'rents to babysit (or you live with them), you may be tempted to bite your tongue to avoid conflict -- only to become resentful later on. We asked the experts for ways to voice your needs, while keeping relationships intact.

Your MIL wants to be in the delivery room. Is she kidding?!

What she's thinking Since she's been through this a time or two herself, she may feel she has valuable wisdom to impart. Or perhaps she just wants to join the party. Once, moms, dads, and medical staff were the only ones in the delivery room (problem solved!), but now BFFs, labor coaches, and even photographers are often bedside. "Your MIL may think she's close enough to you to take part in this special event, or she may hope that being there will bring the two of you closer," says Michele Marsh, Ph.D., a clinical psychologist with the Council for Relationships, in Philadelphia. "However good her intentions, you don't need to honor her request."

How to deal Take this opportunity to make it clear to both sets of parents that you're creating your own little family. "You'll want to let them know that you'll enjoy some experiences alone and join the extended family for others," Dr. Marsh says. Calmly tell your MIL that you're happy she's excited about the baby, but you view birth as a deeply personal, private experience, and only your husband will be by your side. If others will be joining you, though, be direct.

"My sister and I promised to be in the delivery room for each other, and my mom will be there too. But I hope you'll be right outside, cheering us on and ready to help afterward, because we're really going to need you!" Then, ask her if she'd call family and friends as soon as your bundle arrives. "She wants to feel needed. If you give her a job, it will soften the blow," Dr. Marsh says.

Your mother calls the baby by his middle name or a nickname.

What she's thinking She may just be using a term of endearment, but there is a less warm and fuzzy possibility. "This could be your mother's way of trying to maintain authority in the family," says Rosenberg. "A grandma who refuses to address her grandchild by the name you prefer is essentially telling you, 'My wishes are more important than yours.' That thinking is disrespectful -- and absurd."

How to deal To stop the power play, politely state your case: "Mom, please call him 'Gavin.' It's his proper name, and we want him to recognize it." If that doesn't work, be more firm: "Gavin is his name. We're his parents; we get to choose his name. You need to respect our decision. Please stop calling him 'James' and 'G-man.' " If Grandma persists, you might choose to let this one go. Her behavior is annoying but not dangerous. "Even very young children understand that some people will call them silly names," Rosenberg says. If being called G-man bothers him when he's older, he can tell Grandma himself.

Your mother-in-law often shows up unannounced and stays for hours, wrecking your schedule.

What she's thinking She doesn't think she needs an invitation to see Junior. And she's not alone. "Not only do most grandparents see themselves as integral to Baby's life, they also feel they're contributing to his wellness by helping you out," Dr. Haltzman says. Others may simply be repeating history. If Grammy's in-laws and parents visited often when your hubby was an infant, she probably thinks it's expected. And then there are grandparents who have too much time on their hands. "A grandchild often gives retirees a new purpose," Rosenberg says.

Other grandparents may overstay their welcome in an effort to make up for the times when they weren?t there when you were young. "They may feel that being intimately involved with their grandchild is a way to connect with you," Rosenberg says, or just to relish the baby snuggles they missed the first time around!

How to deal Try this approach first: "I'm so happy that you want to spend time with June. But I like to be prepared for company, and I want to keep her on a schedule. Please call or text me before you come over." Be aware, the longer your MIL occupies your couch, the harder it will be to show her the door. "Make it clear that there is a new system in place," Dr. Haltzman advises. "Be direct, but don't explain things too much." If your MIL doesn't get the message, be blunt: "You can't visit without an invitation."

Your mom questions your judgment about child care and flouts your way of doing things when she visits. She wants to babysit, but you're afraid to leave her in charge.

What she's thinking She probably feels that she's a pro at feeding, burping, and diapering because, after all, she raised you. Or Grandma could have lingering insecurities about things she may have done wrong as a mom and she's trying to amend them now, says Dr. Marsh. If, on the other hand, she has always been a know-it-all, she's just staying true to form.

How to deal First, give her the floor to share her point of view. (Otherwise, the convo could blow up into a fight about how you don't listen.) When it's your turn, cite current research and your pediatrician's advice: "It's safer for babies to sleep on their backs than their stomachs. We're following our doctor's orders, and we need you to as well." As Dr. Marsh explains, "It's your right to insist that caregivers adhere to your guidelines, so you can refuse your mother's offer to babysit if she doesn't agree to do so." If you find yourself in this position, say, "Mom, you followed the information you had when I was a baby, and I'm following what I have now. Things have changed. It would be better for you to babysit when she's older and these issues are no longer important."

Your mother seems much more interested in your sister's baby than she is in yours.

What she's thinking It's tough to know. People make connections for different reasons, such as proximity, family history, and personality. "If Grandma lives 10 miles from your sister and 100 miles from you, she'll start to favor the grandchild she sees more often," Dr. Haltzman says. On the other hand, "If your sister was the favorite child growing up, it's not surprising that Grandma likes her baby more." (That doesn't make it any less of a bummer.) Try to remember that favoritism often isn't a deliberate choice. Grandma may subconsciously derive more enjoyment from one grandchild, perhaps because that tot has an easier temperament. But even if she's giving cousin Claire more gifts or visiting her more often, she probably doesn't realize she's treating your little Chase differently.

How to deal Of course you're hurt that Grandma plays favorites, especially if you felt slighted growing up. But it's pointless to call her on it, even if you really want to. She'll deny it, and complaining won't make her change. "Getting attention from a grandparent is great," Dr. Haltzman says, "but it's not essential for your baby's emotional well-being." 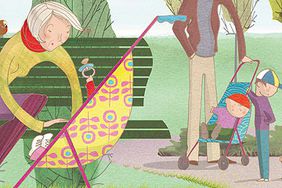