These Deaf Parents Talk What It Means to be a CODA and Raising a Hearing Child: 'We Know How to Communicate With Our Son'

Janet and Daniel Moreno are deaf, raising a hearing son referred to as a CODA (child of deaf adults). Like all parents, they overcome challenges and thrive with support from their community.

Raising kids comes with a host of new and exciting challenges, but Janet and Daniel Moreno had one unique challenge: both of them are deaf. Despite judgment and concerns from some people around them, the couple were excited to start a family and two years ago Janet gave birth to their son, Luke, now 2. Luke was born able to hear and is part of a community of children who fall into this category—they call themselves CODA (Children of Deaf Adults).

This is quite common, in fact, about 90 percent of the children born to deaf parents can hear. Given that neither Janet, 35, or Daniel, 31, were born deaf, they weren't shocked when they found out that Luke could hear.

"We were happy and of course, that would be the same exact reaction if he were to be deaf. Luke is absolutely perfect in every way, not because he ticks all of the 'boxes,' but because he is ours," says Janet.

But it hasn't always been easy. The Maryland-based family have had to deal with quite a lot of people who may be naïve to the deaf community, even before Luke was born. Both Daniel and Janet saw this when applying for jobs.

"They saw my deafness as a hindrance," says Janet. "Most of the interviewers would constantly ask questions about how much it would cost the company to hire a sign language interpreter, and how I could even make a phone call? These ignorant questions really tore me apart."

Constantly facing obstacles like this, they even feared whether Luke would accept them.

"Honestly, I was terrified of not being accepted or him being embarrassed to have deaf parents," says Janet.

But those feelings quickly faded, "Watching Luke grow, my goodness, it just melts my heart. And I admire how he is so aware that I am deaf but at the same time knows that it doesn't make me any less of a mom to him."

Communication Looks Different, but It Works for Us

Communication is perhaps the biggest challenge for the family. At 2 years old, Luke's hands aren't fully mobile yet to do American Sign Language (ASL) so they have been working through some of their own symbols. Facial expressions are so important and Daniel tries to read to Luke with as much animation as possible, always ensuing in belly laughs.

With the pandemic keeping everyone isolated, it has been harder to expose Luke to speech and socialization—both of their hearing extended families don't live close by. The Morenos have noticed that Luke is showing signs of having a bit of a speech delay.

"Like many, we have experienced a lot of isolation with very little exposure for him to socialize and chat with others," says Janet.

With few other solutions available at the time they turned to kids' shows on TV to help him start picking up verbal skills.

"This kind of situation isn't ideal, but it works for us temporally. We also FaceTime our families as much as possible."

Daniel and Janet are equally committed to communicating both verbally and via sign language, knowing that both will be a big part of Luke's life.

"It's funny because a lot of the time, our son can just look at us a certain way in certain situations, and we immediately know what he needs or wants. That is definitely rewarding for all of us!" says Daniel.

But there are situations where parental instinct kicks in and like all loving parents you want to protect your kid. Being deaf can add an extra element when communication is more difficult.

Just before Luke was 1, he had appendicitis, very rare in a young child. As deaf parents, they needed to make sure there was an interpreter there to help them navigate with the nurses and doctors.

"Can you imagine not being able to communicate at the hospital as you frantically try to get your child help upon arrival? It was a terrible experience for the both of us," says Janet.

Luke is still too young to really lean on the greater CODA community but the Morenos have already leaned on a good friend who also happens to be a CODA. Just like their own parents made sure they knew the deaf community well, they intend to have Luke get to know other CODAs.

They confided in this good friend about Luke's speech delay. He shared with them that he did have a speech delay and after some speech therapy, he was speaking normally.

"He assured us that Luke will be just fine," says Janet. "We realized that it is not a matter of when Luke will succeed, but how we can help him reach his potential."

Both Janet and Daniel have made it part of their mission to be creative in support of the deaf community, too. They have an Etsy store that not only brings in extra money but is filled with really unique things like stamped rings that Janet creates with various ASL messages and Daniel created a puzzle with the sign for every letter in the alphabet.

And of course, having supportive friends is always important with young kids. They were fortunate enough to have friends bring dinner over and check on them whenever possible.

The Morenos are soon to add another baby boy to their family in October. They don't know yet if he'll be able to hear, but they will do the early hospital hearing screening, so they can provide for whatever he may need.

Regardless of the challenges they have faced throughout their life, the Moreno family wants people to know that many of their ups and downs are the same that any family would face.

"We are just like you, but at the same time, very different—it does not matter if you are deaf, hard of hearing, or hearing," says Janet.

"We all, as parents, have one goal and that is to raise a family. Parenting is one of the hardest jobs in the world, but never underestimate how a small kindness and support goes a long way." 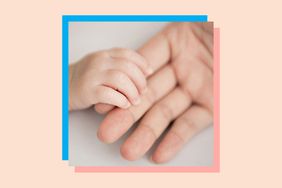