It's a great gift to let children know that someone other than Mommy or Daddy can love and look out for them.

At a key point in my life, I was lucky. Another woman let me love her children. Even more important, she let them love me back. The children were four little blonde California boys, ranging in age from 5 to 13. Their father and I were heading toward marriage. They were part of the package -- an every-weekend-without-fail deal. They spilled into our small beach apartment, toys in hand and hearts open. There was no question: I would stretch my heart in return to accommodate them with all their noise and needs and growing pains. Their father would have it no other way.

But it was their mother who made it all possible, who let them trip in and out without emotional baggage: confusion, guilt, divided loyalties. She didn't burden them with that because she wanted them to have everything they could get, not just from their father but from me too -- whatever love or guidance or fun I had to offer.

What I didn't try to do was mother them -- nurture yes, mother no. They already had a wonderful mother. They didn't need another one telling them how to behave or dress or do their homework, and she certainly didn't need any competition from me. That was not my role. I was more the somewhat-wise secondary female in their lives, who could listen, hold, encourage -- whatever they might need when their parents were overwhelmed, underappreciated, or just elsewhere. I was bench strength, back-up support, occasionally the crazy Auntie Mame in braids and roller skates, occasionally the serious sounding board for their angst or dreams.

As they grew and made their way, I attuned my heart to other children -- my niece, my friends' children -- particularly after a long, late-in-life, and ultimately unsuccessful quest to have a baby of my own. I was another pair of ears and arms. I always let them know how much I loved my work and urged them to find something that sent their own souls soaring.

Occasionally I'd be a little tough on them, pushing them to work harder or stop bullying a sibling or a mom. Sometimes I'd arrive somewhere, and it was clear that parent and child wanted or needed a mediator, which calls for major-league finesse. It's a service best provided by someone who loves both the parent and the child. I gave it as a stepmom, and I gave it later as a friend.

We are so tough on parents in this country -- and they are so tough on themselves, thinking they should be all things to their children. Many feel guilty because they don't have enough time to spend with their kids, which makes it even harder for them to let someone else in. But we're out here, so many of us, with so much to offer. Parents shouldn't feel threatened by that. And it's a great gift to the children -- to let them know that someone other than Mommy or Daddy can love them, look out for them, hold them when they fall, make them laugh when they're sad. By sharing their children, parents simply widen the zone of support and safety around them.

In turn, we significant others must be sensitive to parents' needs. We can't go plowing into their lives like some Pied Piper, all fun and games, beguiling young children whose parents are doing the hard daily work of childrearing. And we can't be fair-weather adults, dropping exuberantly into a child's life and then scramming when we've had enough or we get our feelings hurt.

This is definitely serious stuff, serious good stuff, if it works out. Believe me, I know. Loving other people's children -- and trying, in my own small way, to help these children grow up -- has been one of the happiest pieces of my life.

Anne Taylor Fleming has written for many national magazines, including The New Yorker and The New York Times Magazine, and is an on-camera essayist for PBS's The News Hour With Jim Lehrer. 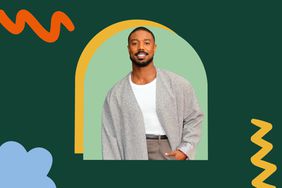 Michael B. Jordan's Movie 'A Journal for Jordan' Is a Family Love Story: 'Love Is the Strongest Bond'