The language we use when describing families is critical. So move over wicked stepparent, and make way for the bonus one!

I didn't have to think about the term "stepfamily" before I got one of my own. It became official when I married my husband in May 2018. Together, we share four sons and one daughter; we've also added another child, a 3-month-old daughter, created by both of us.

The truth is, we'd been calling ourselves a family long before the seven of us (plus the 12-week-old fetus growing in my womb—at that point our little secret) were joined by close family and friends on a sunny afternoon to celebrate the exciting, unexpected direction life had taken us. We were a family—just one type of many that make up the world, none of them more authentic, inspirational or "normal" than the next.

But kids like labels. And they love asking questions. Now that rings had been exchanged and we'd committed the ultimate sin of going on a honeymoon without our brood, many discussions followed about our new status. The kids wanted to know how we were all connected, what they should call each other, and how their little unborn sister slotted into the jigsaw.

Navigating the Challenges of Blended Families

Initially, we reverted to the familiar: stepdad, stepmom, stepdaughter, stepson, stepbrother, stepsister. But little unborn sister wouldn't get the "step" tag; she was our daughter and their sister. Yet, the more we spoke about it, the more I grew to hate the term "stepfamily." When I discovered the "step" part actually comes from an old Anglo-Saxon term meaning "bereaved or orphaned child," I hated it even more.

"Stepfamilies have often been associated with negative connotations in society, in part stemming from negative views of divorce," says psychotherapist Shauna K. Zotalis. "Early research associated negative outcomes for children of divorce, which helped propagate the negative narrative about being from a 'broken home.' That line of thinking has stepfamilies being thought of as not complete families."

Monique Honaman, author of The High Road Has Less Traffic: honest advice on the path through love and divorce, says people often "instinctively impose a bias towards 'step-anything' and assign a shroud of negativity to that assignment." That could have a little to do with the narratives we learned through fairy tales growing up, which, as she points out, featured that oh-so "wicked stepmother."

That's why the words we use when we describe families like my own really matter. "Language about complex family systems can impact the family narrative for good or for bad," says Zotalis. "Positive terminology can help create a positive family narrative, which is important to the couple merging the families since there are many unique challenges that they face."

This Viral Photo Captures How Beautiful Co-Parenting Can Be

I know some of these struggles firsthand. We've had to deal with ongoing animosity from my husband's first wife and her extended family, which has had a detrimental effect on all our children. The financial pressure of having such a large family takes its toll, too. And let's not forget about schedules: we have to be super organized to keep track of where each child has to be every day of the week. Think soccer practice, swimming lessons, doctors appointments, and parent-teacher meetings.

So I decided it was time for "step" to step aside. Initially, I experimented with "blended family"—better, but still not quite right (too much like a caffeinated beverage, maybe?). Then I watched—and loved—a Swedish comedy-drama on Netflix called "Bonus Family" and the chord was struck. That's what we are.

"By definition, bonus implies extra, better or more, which are all things we typically associate as being positive," says Honaman, also the co-author of BONUS Dad! BONUS Mom! A Child's Guide To Understanding The Role Of A Step-Parent.

My kids already have a dad, and my husband's kids already have a mom. A bonus parent means more care, more love, and more support. And my husband and I also benefit from more great stuff: more joy, more laughter, more daily reminders to be our best selves for the little people we're trying to bring up right. (Yes, there's more mess and stress too, but we wouldn't change a thing.)

And as for our latest addition, there's nothing "half" about her. She has a big sister and four big brothers. That was a language decision my husband and I didn't even have to discuss. When my bonus sons' birth mom told them in no uncertain terms that they "had" to call the baby their half-sister, we had all the proof we needed that the term "half-sibling" has the potential to be damaging to sibling relationships. As Honaman perfectly put it: "There is no such thing as half of a sibling; there may be half of a DNA match or half of a gene pool, but when you gain a sibling, you gain 100 percent of that person."

Truthfully, it's only when we're asked about our kids—"Are they all yours?" many people want to know, their expressions a mixture of awe, shock, and sympathy—that we have to put a label on it. At home, our kids are simply brothers and sisters. Whether we're related by blood or marriage, the love that runs through every link in our messy, noisy, complex chain is stronger than any label.

But I still talk about our bonus family because the villainous stepmom has no place outside ancient fairy tales and "half-sibling" is an outright misnomer for a child who, in many cases, makes a bonus family feel even more whole than ever. 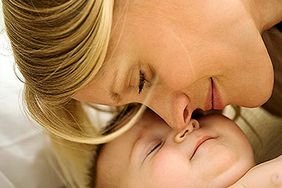 9 Ways Life is Better With Baby