Ever watch your partner with the kids and wonder, "What's he thinking?" It turns out there's a method to his caregiving madness.

One year at the holidays I decided to shake things up. We had installed a pellet stove, and my kids, Paul, 6, and Claire, 3, were worried that Santa couldn't get into the house because the fireplace was blocked. So on Christmas Eve I stuffed their presents into bags and lowered them from an upstairs bedroom window onto the garage roof. Then I slipped a note from Santa under the door explaining that he'd left the gifts outside. It was still dark when the kids shook us awake and led us downstairs. But when they saw the fireplace was bare and the milk and cookies hadn't been touched, they were shocked. I steered them toward the note, and then we helped them put on their boots and winter coats. Armed with flashlights, we searched the yard and, ultimately, the roof. I'll never forget their faces when they spotted those sacks.

No doubt, some moms would say that it's unhealthy for kids to break with family traditions and that someone could have landed in the E.R. fetching those presents. But I say it's a dad thing. Whether it's the way we discipline or diaper, protect or play, guys tend to have a unique caregiving style. I've seen it among my buddies, and I've heard about it endlessly from my wife, Maria, who has been baffled by some of my parenting decisions.

I may be overgeneralizing a bit. However, studies support the idea that fathers do things differently than mothers do. While our approach is often at odds with what the baby books suggest, experts say there's no sense trying to change who we are. "Children need two parents because each has different strengths," explains Steven E. Rhoads, Ph.D., the author of Taking Sex Differences Seriously. "Dads are more likely than moms to provide exciting and unexpected play." If you've ever wondered why your partner seems to put your kids in harm's way or feels the need to turn everything into a game, consider this your cheat sheet for understanding the way he operates.

Watch infant swim classes and you'll see that fathers tend to hold their paddling babies from behind so they're looking forward (encouraging exploration) whereas most mothers prefer to be in front of their child (providing comfort and protection). "Dads push kids to do things that are frightening and exciting, which helps them develop the ability to deal with unfamiliar situations," says Dr. Rhoads. This trend tends to continue throughout childhood. Mom's goal is to keep her kids safe, whereas Dad's is to get them to climb to the very top of the monkey bars, ride the extreme roller coaster, and sleep in the woods.

Why it's great The world is a dangerous place, but to thrive in it a child has to take some chances.

What can go wrong Swallowed pool water, skinned knees, falls from the top of those monkey bars ... all the things we suffered as kids -- and survived.

Do it his way The old adage of counting to 10 to thwart your anger works with anxiety too. When you see your child in a mildly risky situation (such as cresting a steep hill on his scooter), wait a few seconds before yelling, "Slow down!" Letting him navigate the situation himself will give his self-confidence a boost.

Fathers don't just feed babies; they pretend the spoon is a Black Hawk helicopter. They don't merely hold a child; they toss her in the air to simulate flying. (Unfortunately, they don't always think to space out meals and turbulent activity, which is why your child may spit up more often when Daddy is watching her.)

Why it's great Fathers instinctively realize that young children tend to learn through play, explains Joan Kinlan, M.D., a child psychiatrist in Washington, D.C. Having her lunch flown in or being launched skyward helps impart the lessons that pureed yams are, in fact, edible and that she can trust Dad to catch her.

What can go wrong Sometimes Dad's too much fun. You don't want to be your child's best buddy. "Kids still need to see you as a parental figure," says Lisa Dunning, a family therapist in Denver and the author of Good Parents, Bad Parenting. "Otherwise, you'll have a hard time disciplining them."

Do it his way Be more creative with mundane tasks. If getting your kids to brush is like, well, pulling teeth, make up a goofy song to get them to cooperate. Feel free to use the one I sang nightly to my kids (to the tune of "Old MacDonald Had a Farm"):

In my mouth I have some teeth

And in my mouth I put my brush

Here a wiggle, there a jiggle

In my mouth I'll keep my teeth

Acting Childish is the Point

Two of my kids' favorite activities used to be "pro wrestling" and "pie fights." For the former, we'd invent characters and have pretend battles in the ring. For the latter, we'd fill bowls with shaving cream and take turns taunting each other until everyone got creamed.

Why it's great The long-term effects of physical play are exactly the opposite of what you might expect, according to a committee assembled by the Board on Children, Youth, and Families of the National Research Council. Rather than encouraging aggressiveness, it actually helps establish boundaries ("No biting; stay away from the eyes") and teaches self-control ("Okay, that's enough"). The group also found that discouraging rough-and-tumble play might make your kids less popular with their peers. "Boys, especially, are bound to lock horns, so it's good for them to learn the rules and practice with a friendly foe," says Dr. Rhoads.

What can go wrong A child could get walloped or accidentally catch Gillette Foamy in the eye. But the main thing to watch for is that the playing stays positive. The minute you notice that a child is being picked on or becoming frustrated, step in before someone gets physically (or emotionally) hurt.

Do it his way Try horsing around with your child in the backyard, pummeling him in Wii boxing, or playing an extended game of "Tag -- you're it" in which you really try to win. Kids need your tender touch, but a little tough love can be beneficial too.

We Trust Our Gut

Let's be real: If a guy won't consult the instructions when assembling a crib, what makes you think his approach to parenting will be any different? Dads would much rather wing it than ask someone for advice or read what an expert recommends.

Why it's great Go-with-your-gut parenting tends to be less stressful because it prevents overthinking. The more points of view you open yourself up to, the more likely you are to question every decision.

What can go wrong As evidenced by men's taste in movies (the more stuff that gets blown up, the better), not all of their instincts are sound. For instance, dads often tune out a baby's cry during the night, whereas moms are more likely to wake up to comfort their child, according to a Swiss study.

Do it his way Avoid paralysis by analysis. Of course it makes sense to read about alternative methods for dealing with tantrums or to ask friends how they potty trained their kids. But when you make a decision, stick with it instead of second-guessing yourself.

Routines Are Made to Be Broken

You have the kids on a carefully calculated schedule. But then Daddy lets them stay extra-late at the playground, causing them to miss their normal bedtime.

Why it's great An occasional change of pace can be beneficial for kids. "It teaches them to be flexible, that there's more than one way of doing things," says Dunning. "Plus, it's fun."

What can go wrong Kids are creatures of habit. When you throw off their routine, they're more likely to be tired and cranky the next day. Plus, if your spouse's spur-of-the moment mentality becomes the norm, your kids may not be getting the stability they need.

Do it his way Every now and then, do something out of the ordinary with your kids. It'll surprise and excite them. Let them eat dinner at a friend's house while on a playdate or watch a special show in lieu of taking a bath. You might even arrange an impromptu visit to Dad's office and throw off his schedule for a change. Touché.

I'd like to think my kids have benefited from my way of raising them. However, I should also thank their mom for the innumerable things she's taught me about parenthood, like these four biggies.

Emotion isn't a character flaw. One of the tenderest moments I had with my son, Paul, was when our dog died unexpectedly. We all hugged and cried together. By watching Maria share her feelings, I learned that it takes real courage to show your kids that you're human.

Sports aren't everything they're cracked up to be. I desperately wanted my kids to be the athlete I never was. So I coached them and drilled them until they lost interest completely. My wife never understood it. "It's just a game," she said. I realize now that she was right.

Kids can't always wait. I was working in the yard when Paul (who was potty training) said, "I have to pee now." When I carried him into the house minutes later, soaked, Maria glared and said, "When he says now, he means now." After that, I dropped everything when my kids needed me.

Being is far more important than doing. At first my caregiving style was to keep Paul and Claire constantly busy with activities and outings. But Maria showed me that spending time with your children simply means being there and not rushing to go somewhere else.

Originally published in the June 2013 issue of Parents magazine. 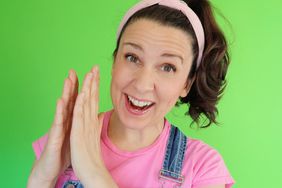 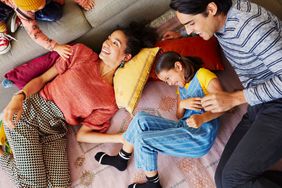 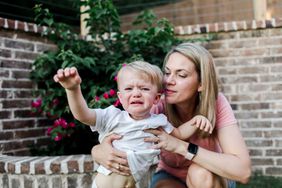