A father shares what helped him and his child survive the loss of his wife.

The image is etched in my memory. It was the spring of 1992 and my wife, Nahid, was bottle-feeding our son, Sasha, born in January. He was sucking happily, and she was smiling at him with great love and tenderness. Strands of her beautiful long black hair wafted down and settled on his face. Her chemotherapy treatments were taking effect and her hair was falling out. There it was in living black and white -- the innocent and awesome beauty of new life, coupled with a sword of Damocles hovering over us. My life had already changed in ways I could not even have imagined.

Nahid had been diagnosed with breast cancer when she was five months pregnant and soon thereafter had to undergo a mastectomy with Sasha in her womb. Delicately balancing the needs of mother and child, the doctors allowed our son one month of breastfeeding after birth. He then had to switch to the bottle because his mother could no longer delay chemotherapy treatment.

Cancer is the only terrorist I have personally known. Caring for someone you love who has cancer means constantly waiting for the results of tests that push you either away from the cliff or toward it. The terrorist in our family seemed to go away as my wife settled into remission. Then, ferociously, it came back four years later, in August 1996, leading to multiple operations and constant pain management for Nahid. Our everyday normal life disappeared as I found myself consumed with visiting doctors, researching treatments and special diets, caring for my wife and son, and working as a partner in a law firm. My schedule was a blur, and the blessed life we once knew appeared like a mirage in my memory. It came to the point when I could not even listen to music anymore because it was a painful reminder of the elusive notion of a normal life.

This November will be the eighth anniversary of Nahid's death. I remember her extraordinarily sweet smile -- so warm, welcoming, and loving. She was an ocean of courage and beauty. Like a fog lifting, my son and I have gradually returned to normal life. Our son was 6 years old when Nahid died. This year, Sasha -- a healthy, athletic, typical teenager -- is starting high school. As for me, I not only love listening to music again, I recently started piano lessons.

How did we go from there to here? I've given this journey a lot of thought, and here's what helped us move beyond our grief.

The Breast Cancer Research Foundation has an ad that says: "Breast Cancer Doesn't Just Affect Women." It's true. The disease affects the entire family -- most immediately, the partner and children. The partner -- who juggles emotional, logistical, medical, and financial support for the ill person; cares for the children and his own mental health; and holds down a full-time job at the same time -- is also part of the disease picture. In the Bay Area, I found a multitude of support groups for caregivers, women with breast cancer, and widows, but I found no support groups for single widowed fathers. Our needs, the way we relate to grief, and how we cope are not exactly the same. In some ways, the hurt, pain, anger, fear, worry, stress, and grief are universal. In other ways, they are unique, such as figuring out how to parent as a solo dad. Yet to my eye, this group of widowed fathers seems almost invisible. More institutional support and resources need to be directed to help surviving fathers with children.

Loss and death are an integral part of life. I have experienced directly the tenuous and transitory nature of our existence. The loss of my wife also made me find in myself the ability to survive, raise my child, and face anything life throws at us with an inner strength I never knew I had.

Kip Evan Steinberg is an immigration attorney. He lives in San Rafael, California, with his son, Sasha, and their two cats. 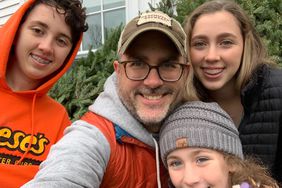