Shawn Johnson East hasn't been private about her struggles with breastfeeding. In late August, the former Olympian got candid about her difficulties nursing newborn son Jett, noting that every day is different when it comes to feeding.

"There's always one feed a day where he seems super hungry and gives all of the cues but then screams bloody murder when I try to feed him. It makes me so sad," Johnson East typed in one of her Instagram story photos.

Johnson East and her husband, Andrew East, also share 21-month-old daughter Drew, who was similarly "such a struggle" when nursing.

Johnson East's short-term solution to her breastfeeding problems? Consuming a sports drink called Bodyarmor. She shared the update on her Instagram story on October 8, gaining some attention from new mamas.

Some people claim that drinking Bodyarmor increases milk supply, although it hasn't been scientifically proven. That's because ingredients like coconut water and electrolytes can help with hydration efforts. The extra calories and fluids in Bodyarmor might be also be beneficial for nursing.

Most of the evidence is anecdotal; for example, take this recent Reddit thread. "I tried one of the body armor drinks and I just froze 10 EXTRA oz on top of having enough to give her a bottle, make her home made food blended with milk, and some popsicles," said the original poster. Another person commented, "They helped me keep up with drinking enough and I noticed a difference in production. My (mother-in-law) is a lactation consultant and recommended them to me."

While it probably won't hurt to try Bodyarmor for breastfeeding, it's important to speak with your OB-GYN or lactation consultant about any nursing issues, recommends Jane Morton, M.D., a pediatrician and breastfeeding expert, who also co-founded First Droplets, a "breastfeeding community for mothers and educators."

All About Your Breast Milk Supply

Low milk supply is "a problem worth preventing," according to First Droplets, and the first tip Dr. Morton shares is the effectiveness of hand expression, most useful in the first moments post-birth. First Droplet says that "breastfeeding rates are higher at 2 months," when using hand expression techniques compared to not. Remaining calm and levelheaded when breastfeeding is another tactic recommended to increase supply.

Like Johnson East, many new parents face low milk supply and breastfeeding struggles. Whether you want to combat problems with hand expression, a drink found at the grocery story, or other solutions, it's important to run any ideas by a professional. At the end of the day, experts know what's best for Mom and Baby. 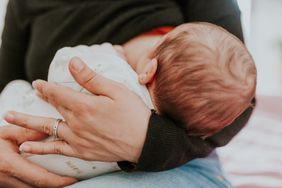 Cluster Feeding in Newborns: A Guide for Parents