The comedian, writer, and producer opens up about welcoming her new son during a pandemic, giving herself permission to be a single mom, and how she's raising her kids to be feminists.

From producing TV shows like the acclaimed series Never Have I Ever to interviewing vice-presidential candidate Kamala Harris to raising a toddler and newborn, there doesn't seem to be anything Mindy Kaling can't do—even in the midst of a pandemic. But the comedian admits that living through this challenging year has been as stressful for her as anyone.

The multitalented entertainer and mom told us how letting go of other people's opinions led to her greatest happiness, as well as the biggest stressors and inspirations she's experienced while parenting during a pandemic, and how she's raising her kids to be feminists.

In the past, Kaling, has been outspoken about not needing a partner to take care of her needs and desires, which included becoming a mom. But she wasn't always in that headspace.

"I'm Indian, and my parents and extended family are truly traditional," says Kaling. "But I was like, 'I want to put my own happiness in my own life. I want to be part of my community of moms and parents, and you don't need a man to do that,' and once I gave myself permission, and I thought, 'I don't care what other people think,' I decided, 'I'm just going to be part of that community.' It was like a weight was lifted off of me."

Her best advice for anyone who is contemplating single parenthood by choice: "I hope you find a partner, if that's what you want, but if you are thinking about having kids, and you are waiting for that to be the reason, I just want to encourage you to not feel like you need that. It has been the biggest difference in my life. It's brought me the most unadulterated joy in my life. If I hadn't made that decision, I would be kicking myself."

The Joys and Challenges of Parenting During a Pandemic

Of course, being a parent in 2020 has meant taking on various uphill battles. A self-described "type A person," Kaling feels the most stressful part of living through this time has been the lack of any kind of control—and what this year has taken away from her daughter, Katherine, 2. "I loved school as a kid," she elaborates. "And I hate that my daughter can't go to preschool. She was supposed to start this year. And then, like a lot of parents, having to be the person who has to provide her with that educational journey at home has been the most challenging."

At the same time, she says she's been unexpectedly inspired by the opportunity to spend so much more time with Katherine. "I'm a busy, single parent who has like basically two full-time jobs," says Kaling. "And this period has really assuaged any fears I had about being neglectful of my kids. I joke that the past eight months, there have been times when my daughter and I are just staring at each other. I feel like I just won't ever have to worry about not feeling connected and close with her, because we forged such a bond in this period."

How the Pandemic—and Pregnancy—Improved Her Nutrition and Self-Care

Staying safer at home also made it easier for Kaling, who welcomed her second child, a boy named Spencer, in September, to invest in her wellness while pregnant. "I was at home, so it was just a lot easier to eat healthy and experiment with recipes for salmon or healthy smoothies," she says.

But like every parent, Kaling is always looking for options that are speedy and convenient, which is why she says it felt natural for her to partner with Campbell's for their Well Yes! soup line. "My favorite is their butternut squash soup," says Kaling. "I can take the cap off, microwave it, and a minute later, I can have healthy food, so there's literally no excuse."

Beyond nutrition, Kaling has been taking care of herself through exercise and skin care. "I exercise religiously, and it's truly so I feel energy and endorphins, because endorphins are nature's therapist, pretty much," she notes. "And I always was like, 'Oh, I really want to be one of those women that does like face masks every day.' And now, I'm like, Chrissy Teigen and Rashida Jones where I'm actually doing it. I feel like my skin has never looked better, so it actually works."

Kaling, who's beloved by fans for her feminist work and voice, hopes she's giving her daughter a front row seat to what feminism looks like in everyday life. "My daughter is seeing the fact that I can work and be an employer of 200 people between my two different shows but then also spend time with her, play with her, read books to her," says Kaling.

She's also prioritizing her kids' awareness of famous female role models. For instance, the recent passing of Justice Ruth Bader Ginsburg opened the door for her to talk to her daughter about the late icon. "I was wearing a T-shirt with her on it, and my daughter wanted to know who it was," explains Kaling. "So, I went and did more research, and then told her about RBG. It's really exciting to be the person who gets to explain all of that stuff to my daughter."

And even though Katherine is still so young, Kaling sees the merit in talking about RBG and other influential women throughout history. "The more you're talking about Rosa Parks, Jane Goodall, Kamala Harris, the better," she notes. "She'll just grow up thinking it's normal to be a civic-minded woman."

And by having Mindy Kaling as her mom, there's no doubt she and her brother will grow up seeing what it looks like to own your dreams, creating your own happiness and success. 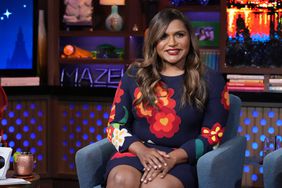 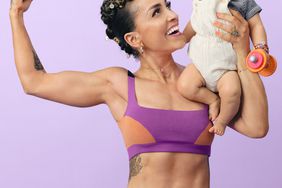