The father of two reflects on his experience starting Jonas Brothers and how his own parents taught him how to encourage his daughters' passions.

When I first met Kevin Jonas, we were both in our late teens. It was 2006 and he was part of a new band called Jonas Brothers, headlining a small venue on Long Island, New York, ahead of the release of their first album It's About Time. I was a high school journalist on assignment to introduce my classmates to their soon-to-be musical obsession. We chatted about his upbringing in Wyckoff, New Jersey, what it was like playing music with his brothers, and his dreams for his career—which I'm sure have since been exceeded.

Many, many years have passed, and Kevin, along with his bandmate brothers Joe and Nick (and even "bonus Jonas" Frankie, who co-hosts ABC's Claim to Fame) are household names. They've since recorded five studio albums and made 31 music videos. They've been touring basically since the day we met until their split in 2013, when they took some time to figure out who they wanted to be individually and as a band. To follow their journey is almost like watching a coming-of-age story—at least that's how it's felt for me. I grew up right alongside them. In 2013, I was also navigating the unknowns of early adulthood—starting my first job, living on my own in New York City for the first time. When the band announced their break, Joe tweeted "please hold while we get our shit together"—and I felt seen. I was doing the same. When they reunited in 2019, it felt like we were all finally settled into our adult lives (yes, the Jonas Brothers and me—let me have this moment).

Fast-forward to 2022. Kevin is married with two children, Valentina, 5, and Alena, 8, with wife Danielle, whom he wed in 2009. Joe and Nick are also now parents—Joe is dad to 2-year-old Willa, with another on the way, and Nick welcomed baby Malti earlier this year. They are still recording music and touring, but now while navigating parenting at the same time. As brothers and bandmates, they all support each other through this new life phase: "It's about giving each other time when needed to be home with our families," says Kevin about how they make it work. "We live in different states now, but we come together and we do our thing. We love it, it's a passion, it's exciting. The album we are working on now is my favorite thing we've ever done. But we know there will be a time when we are touring again and what does that look like now with even more of us? We communicate what we need but at the same time we work to make everyone's lives as comfortable as possible while the storm is always raging."

While I'm not a rockstar with a stadium tour on the horizon, I am a fellow member of the working parents club and understand the juggle. In a full circle moment, I sat down with Kevin (on Zoom this time) to catch up on his life now. Kevin is partnering with Wells Fargo on the Active Cash Visa Card that encourages users to follow their passions, something he knows all about.

Kevin shares about his family, how he supports his kids' passions, and what it was really like to be a celebrity so young.

How do you feel thinking about the kids that you were back when we first met, now, through the lens of being an adult and a parent?

Things are definitely different than when I was 17 or 18 when we first talked. It's wild to think that I've been doing this for longer than I haven't been doing it. Times have changed—we've had to take breaks and learn who we are as individuals and as fathers. It's been a complicated journey, but I think we've grown to be the people we want to be and we are still learning who we are. Back then I think we were just young, having a good time, and truly following our passion.

I always say I have learned to understand my parents and the decisions that they've made a lot more now that I am a parent myself. Do you feel the same way?

Oh, 100%. Back then, I was definitely an angsty teenager and didn't understand. Of course, you learn lessons. I think my parents did the best they could—there were four boys in the house, there was a lot going on, people were going in all different directions, especially as we got a little older. It felt like we were just out of our minds trying to do all those things that early. I think about it now and I realize Nick was the same age as my oldest when he was in the city essentially by himself doing a Broadway show. I don't know if I would ever let that happen. That's what's crazy. Parenting is its own journey and luckily my parents were great examples of showing how to support us when we had a passion without ever pushing us to be something they were trying to be. When people hear the word "stage parent," they assume that's how we grew up, but [our parents] saw in us that this is what we wanted.

Parenting is its own journey and luckily my parents were great examples of showing how to support us when we had a passion.

Are your kids starting to find passions of their own?

My daughters love gymnastics, they love to dance. My oldest loves basketball. In this last summer, they've actually fallen in love with golf as much as I have. It's been really fun. My daughters really enjoy it; they come out with me; they hit balls. It's an activity that I love but I am introducing to them early so hopefully it can be something we continue for years to come.

How do you and Danielle support them and help them figure out what they love to do?

I think it's about trying new things. That is one of the hardest things for people to do. I was one of those guys who was interested in a lot of things and didn't know which was going to stick. I can relate to them saying they want to do dance, golf, basketball, gymnastics. The other day, my daughter said, "I want to do hockey," And I was like, "Who are you hanging out with? Who is playing hockey?" She's 5! But I was like, "OK, let's look into what it takes for you to play hockey." I go with what they are passionate about. My daughters have a creative side, it's built into our DNA in the Jonas family, so I just want to support them. And Danielle does such an incredible job—I am not always here, so she is the superstar of the family for sure. She runs this house.

What does family mean to you?

I think family for me is just your true support system, no matter who it is—when you have that person you can truly lean on in the happiest and the darkest of times. It is the passion that comes from someone just being willing to be there. Family is being there and, when you are there, you're present; I think it matters. 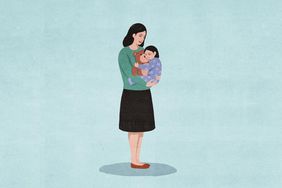