When it comes to the most challenging aspects of marriage and co-parenting, these famous parents haven't held back.

our editorial guidelines
01 of 07

Sure, it's not a massive fight over finances or a parenting strategy, but cute, comedic couple Kristen Bell and Dax Shepard clearly don't see eye-to-eye on everything, judging from their ongoing social media "feud." From clashing over a La-Z-Boy chair to arguing about a three-wheeled motorcycle that Dax brought home, the pair has been pretty candid about their domestic disagreements.

Bell also shared with People that they do couples therapy. "We have a very healthy marriage and we got there by doing therapy when we needed it, and constantly doing fierce moral inventories," she said. "We both take responsibility when we are wrong, and I think it is easy to work with him, because I married him, because I enjoy spending time with him, and I trust him. That is exactly what I want in someone that I work with."

The pop star and mom-of-two—to Willow, 6, and Jameson, 6 months—has been with husband Cary Hart for years, but in 2003, the couple split up before getting back together and tying the knot in 2006. They broke up a second time in 2008, before reconciling the following year.

Last year, Pink talked to Ellen DeGeneres about giving one another a breather. "We take breaks," she explained. "We've had two breaks. The first one was about a year. And the second one was 11 months." She joked that they are "due" for another one, explaining that sometimes, she wishes they were more on the same page with one-on-one time.

"He always falls asleep putting Willow to bed," Pink explained. "The other night I said, 'Are you going to stay up tonight?' And he said, 'I would like to.' I said, 'I don't really know what that means. Should I light candles and open wine and put on a show? Like, are we going big here? Or are you going to fall asleep again?' So I lit the candles and opened the wine and an hour and a half later [he's asleep].... Can't he just stay awake? He sucks." Ultimately, she explained that he falls asleep, because he's spending time with Willow and is "an incredible dad."

Hey, the struggle of juggling parenthood and intimacy is all too real.

Although the actress and Ben Affleck have filed for divorce, the pair who have three children together—Violet, 11, Seraphina, 8, and Samuel, 5—have been very open about the work they put into their marriage and how they see the future of their relationship as co-parents.

"It's not Ben's job to make me happy," Garner told Vanity Fair. "The main thing is these kids—and we're completely in line with what we hope for them. Sure, I lost the dream of dancing with my husband at my daughter's wedding. But you should see their faces when he walks through the door. And if you see your kids love someone so purely and wholly, then you're going to be friends with that person."

The former footballer is famously married to former Spice Girl Victoria Beckham, with whom he shares four kiddos. Beckham told Entertainment Tonight in January 2017, after the couple renewed their wedding vows, "We know each other better than anybody. People have talked about, 'Do we stay together because it's a brand?' Of course not. We stay together because we love each other, because we have four amazing children.... Do you go through tough times? Of course. That's part of relationships. It's part of marriages. It's part of having children. It's part of having responsibilities."

The actor, who shares 6-year-old twins Harper and Gideon with husband David Burtka, shared the reality of marriage for him in a column for Out magazine in 2012: "What defines a relationship is the work that's involved to maintain it, and it's constantly changing. Sometimes I'm deeply in love with David and head-over-heels, and sometimes I question whether it's going to work out and is meant to be. It's like a business relationship, as well as a personal one; we have a business together, and that's maintaining our love for one another."

The actor has been with wife Sarah Michelle Gellar for 17 years, and the two are parents of 7-year-old daughter Charlotte and 5-year-old son Rocky. And sure, they've been together for an admirably long period of time—especially by Hollywood standards—but Prinze has said it's not always a cakewalk. "We were fortunate enough to be at the right times in our lives where we both wanted something serious, and it worked," Prinze said during an interview for AOL Build. "So, we're lucky, but we also work very hard at it. It's not just dumb luck, it's work."

The actress and husband Chris Pratt share 4-year-old son Jack and have to be one of the most adorable and funniest families in Hollywood. But Faris has been candid about the challenges of the spotlight shining on their relationship. "We grapple with the idea of being a public couple," Faris told ET. "For the first time, maybe a year ago or 10 months ago, we were in the public a little bit. There were some tabloid rumors about strain on our relationship. I just remember feeling so hurt in a way that bothered me because I didn't want to think of myself as somebody that could be affected by tabloid s**t. There's a picture of me walking alone on the beach – aging Anna Faris, alone on the beach.... I take pride in how great my relationship is with Chris, but, having said that, of course, in this crazy world where he's off doing movies and I'm in L.A. raising our child, of course I'm going to feel vulnerable, like any normal human would. It did make me feel like, 'Is public perception – even though it's false – is there a grain of something?' It made me feel incredibly insecure." 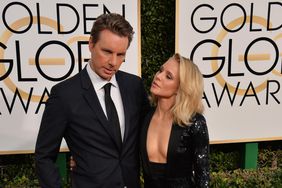