The actor discussed her powerful new movie, A Mouthful of Air, with co-star Finn Wittrock, why mental health awareness matters, and the pandemic parenting silver lining.

In a scene from A Mouthful of Air, while examining Amanda Seyfried's character, Julie, a male OB-GYN tells her, "I've started asking new mothers how they're feeling when they come in, not just physically, but really how they're doing. That's because of you."

It's a simple question. But it's one that so many new parents need and often do not get to hear.

The postpartum period is tough in so many ways, but for those struggling with mental health issues, it can be debilitating. In the film—directed and written by Amy Koppelman and based on her novel of the same name—Julie is suffering from severe postpartum depression (PPD) that leads to a suicide attempt after the birth of her first child. The movie follows Julie's improvement and then her suffering from postpartum depression again after the birth of her second child.

"I think we all just want to be good mothers and it looks different for everybody," says Seyfried. "But what is the same is when people are suffering from postpartum depression, it makes having a child so much harder."

Seyfried says she fell in love with the script and was involved with the project for several years before they were able to make it. "It's hard to make movies like this," says the Oscar-nominee. "It's hard to look hard things in the eyes and find purpose and promise for some reason." But the film captures a difficult theme while allowing you to feel Julie's pain and that of her husband, Ethan, played by Finn Wittrock. "The dichotomy between the lightness of the set and the lightness of the world around Julie, my character, is so jarring, but it really helps you understand. It makes you want to be involved as hard as it is to watch somebody suffer from something," adds Seyfried. "There's a message here."

That message is critical as about 1 in 8 women suffer from PPD, among other mental health issues postpartum. "You can have the most devoted husband in the world and the most incredible sister or mother, but at this level, you need real help," says Seyfried. The movie portrays that with Ethan who wholeheartedly loves his wife, something that Wittrock admires about his character. "[It was] a strong relationship that was complicated and rich and full. They really had a true love for each other," he says. Of course, that's typically not enough. "I hope that people can fearlessly reach out to their support system," adds Seyfried. Along with a person's medical team, a great resource Seyfried points to is Postpartum Support International, which offers information, resources, and help to those who need it.

A Mouthful of Air also explores the shame that still lingers over taking medication to treat mental health issues, despite how common they are. That's a stigma Seyfried wants to end—she's been open about dealing with anxiety and obsessive-compulsive disorder (OCD), as well being on Lexapro for years and continuing to take a low dose during her pregnancy. She's mom to Nina, 4, and Thomas, 1, whom she shares with husband, Thomas Sadoski.

"There's a lot up against new mothers in the fourth trimester, especially when all the support goes away with health care, but I think the stigma really is one of the things that keeps us from talking about it, it keeps it from being normalized," says Seyfried. "For me specifically, I had a plan with my doctor, and I felt really safe with that plan… At the end of the day, I felt like I just needed to take care of myself, and if I was supporting myself, I could be a good mother."

Underneath the film's focus on mental health challenges while parenting, is also the fear of failure, which parents across the board can relate to. That's especially true while parenting during the pandemic—something Seyfried and Wittrock, whose son, Jude, was born in 2019, understand.

But the silver lining of pandemic parenting? Spending so much time with their little ones. "We are never going to get that time back," says Seyfried. The co-stars agree their typical busy careers likely wouldn't have allowed for this level of bonding time. "Seeing an entire year of their life, day-to-day," says Wittrock. "To really see it through—it's really special."

A Mouthful of Air hits select theaters on October 29. 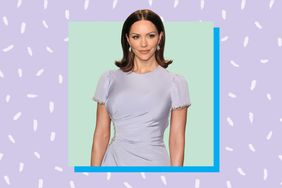