The Jane the Virgin actor opened up about the tools that are helping him and his wife Emily Baldoni handle back-to-school season and the fun way they are raising money for PTAs all around the country.

Most transitional times are filled with highs and lows for kids and parents, and going from summertime to back-to-school season is undoubtedly one of those moments. But it can also be an opportunity to get centered. And that's exactly how it's felt for Jane the Virgin star Justin Baldoni as he and Emily Baldoni sent their two kids—Maiya, 6, and Maxwell, almost 4—off to school.

"Having the kids in school from 8 to 3 is a pretty exciting thing," says the filmmaker, podcast host, and author of Man Enough, who has partnered with HP Instant Ink to raise funds for PTAs nationwide. "It's been really tricky trying to find that balance this summer, especially with working from home and having the kids at home. You always feel like you're failing at one of them. It's like I'm not giving enough to work, and I'm definitely not giving enough to my kids. So it's just about having grace and compassion for ourselves as we navigate this, because we're all in it, especially those of us that are parents trying to find that balance."

Baldoni exclusively tells Parents.com how he and Emily are prioritizing that grace and compassion—as well as healing and fun—as their family heads into the new school year.

Getting Creative and Letting Loose—for a Good Cause

For the HP Pays Your PTA fundraiser, which will donate up to $3 million to Parent Teacher Associations across the country, the couple and their kids all appear in a social media campaign—a parody of the Backstreet Boys' "Everybody" called "Back-to-School, Alright!" Parents and teachers are encouraged to create their own Instagram Reel by lip-synching the tune to promote their school's fundraiser using the hashtag #HPPaysYourPTA.

When they were approached to pitch in, Baldoni says he got excited as a dad. "I don't think we see enough dads in the media talking about dad stuff and parenting, especially as it relates to like getting involved with the school and PTA," he notes. He was also interested in supporting schools following the challenges of the 2020-2021 school year.

Given free rein to play and have fun with it, Baldoni says shooting the parody was "an amazing day for a good cause."

The Parents Guide to Back to School 2021

The couple's daughter Maiya started first grade last week, and Baldoni says he's loving "experiencing her personality." "I'm getting to see who she's going to be," he explains. "I'm also getting to see the effects of how we've been parenting her, how they're taking root in her, how brave she is, and how emotionally intelligent she is."

For instance, he asked her before school how her body was feeling, and she said she was excited and nervous. "I was so proud of her for being able to even voice those two things, because we've really been focusing on emotional intelligence in the way that we raise our kids, so I'm just really proud to see her blossoming," says the doting dad.

Stereotypes and expectations stemming from a child's sex is also front of mind for the author who is currently working on a middle grade adaptation of his book Man Enough called Boys Will Be Human.

As Maiya moves into elementary school, Baldoni says he and his wife are working to teach her how society will "try to put her in a box" and to label her as "pretty and tall" and "tell her that she should be polite and sweet and cross her legs and be accommodating and not interrupt and not take up space."

"I'm trying to teach her now that she's so much more than those things," he shares. "I want her to have a irrevocable sense of self that allows her to take up all the space she wants, to understand that she's not less than because she's a girl. That she can do anything that I or her brother can do. I'm trying to build that sense in her, so that by the time she gets to school, and people tell her that she has to be a certain way, she knows and can decide for herself the type of woman she eventually wants to be."

Continually Working on Their Own Healing

Although Baldoni admits he doesn't think that he and Emily will ever find that elusive balance most parents strive for, they do their best to focus on the roles they have to fill every day—whether that's work, supporting one another, or spending time with the kids—and taking turns.

"Like in wrestling, when you have your tag team, we tag each other," says Baldoni. "It's kind of been like that this year."

One practice that's been hugely beneficial for their partnership: a focus on deep healing. "The deeper we get into our own healing, the better parents we become," says Baldoni.

For instance, they might recognize that one way they've been parenting is a trauma response that's not healthy but stems from a way in which they were parented, so they'll work to get to the root of that. "You can't do that unless you're spending time on yourself, and you're healing, and you're having alone time," he notes. "That's a big thing for us right now—going inward so that we can go outward and be the best parents that we can possibly be."

Carving out time to do just that means going to therapy individually and as a couple, explains Baldoni. "It's preventative therapy," he notes. "I like to think of it as stretching before you work out. And I always like to have lots of tools in my tool belt—emotional ones." They're also spending time reading and learning how to play more.

Their individual work and healing has made it possible for them to more readily hold space for one another as parents and a couple, explains Baldoni. "There was a time in our lives when Emily and I would find ourselves in this bickering conversation around who's more tired at the end of the day," he says. "And we learned that we're both tired, and it's different kinds of tired, and that we have to create space for that. At the end of the day, we're a team. We call each other helpmates."

Now, if they start to feel antagonistic, they'll take a step back and remember that they're raising their kids together, they love each other, and that antagonism must be stemming from another underlying issue. And at that point, Baldoni says that's a cue to give themselves "a timeout to figure out what that is."

"That's been a lot of our work right now," he says. "Like that wrestling team, we tag each other in—and go conquer it together." 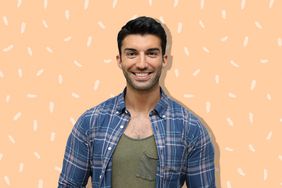