The actor, author, and activist shares the powerful lesson she learned about being vulnerable and asking for help.

Earlier this summer, Apple Fitness released new episodes of Time to Walk, an inspiring audio experience on Apple Watch that's meant to encourage users to get out and walk more often. The episodes feature celebrities opening up about their personal battles and lessons—all while walking "with you"—and in the newest episode, hitting Apple Fitness today, actor, author, and activist Gabrielle Union talks about her fertility journey, which she dove into in her early 40s.

In the episode, Union details how the uphill battle—which included nine miscarriages and "one excruciating heartbreak after another"—taught her a crucial lesson about vulnerability and asking for help.

"I've always been able to achieve my way into anything if I just worked hard enough, and it's probably another reason why this whole journey just brought me to my knees," she notes, sharing that she realized she couldn't "will" her baby dream to happen.

Union admits that after facing so much heartache, she just wanted to keep her grief and her pain to herself. Soon, though, she met with Dr. Kelly Baek, a reproductive endocrinologist in Los Angeles. "Within seconds of examining me, she said, 'You have adenomyosis—endometriosis of the muscle, so it's actually, the inside of the muscle in your uterus, and you need those muscles to help nurture and support a baby,'" recalls Union.

She ended up realizing that dating back to her 20s, she had periods that lasted 8-10 days, marked by "incredible pain, insane PMS" and "huge clots." This, Dr. Baek reassured Union, was "not normal." She then encouraged Union to use a surrogate.

"I took it as a sign of failure," notes Union. "It felt like, 'I am defective, I am unworthy, babies reject me.' It just shakes you to your core."

But ultimately, upon talking it through with her husband, NBA star Dwyane Wade, she found herself opening up to the idea.

"My husband said, 'You've done enough. As much as we want this baby, I want you more,'" notes Union. "It kind of gutted me. I finally limped my way to the surrogate finish line, and I finally said, 'Let's bring in the pinch hitter, let's bring in a surrogate. At the end of the day, I want a healthy baby, and I'm OK to let this part of the journey go.'"

Now, a few years later, Union and Wade are parents to daughter Kaavia James. "She is the most amazing human being on the planet," says the proud mom.

And after years of being "so painfully independent" and not asking for any kind of support, Union has come to the conclusion that "asking for help doesn't make you weak."

"I realize that the journey is a lot sweeter when you are vulnerable enough to ask for help, and you realize that your vulnerability is your superpower," she explains. "Don't go down in a ball of flames, because your ego and your pride won't allow you to say, 'Can you help me?'"

The star goes onto share additional personal, life-shaping moments and memories in the 32-minute episode. No doubt her heartfelt, vulnerable revelations will serve to remind many listeners that they're not alone in their fertility struggles, and that sharing your story can be integral part of healing—and moving into the next part of your story.

Gabrielle Union's Note to Parents Everywhere: 'Needing Help Does Not Make You Weak'

You can check out Union's episode of Time to Walk and others now through Apple Fitness on your Apple Watch Series 3 or newer models. 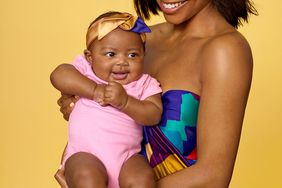