Eva Longoria does every thing she can to make the world a better place. That now includes raising her son, who just turned 1, to be the kind of man the world needs.

Eva Longoria wears many hats: She’s a mother, a wife, an actor, a director, a producer, a philanthropist, and an activist. One day you’ll find her toting 1-year-old Santiago Enrique to the pediatrician’s office. The next she might be hosting a women’s empowerment luncheon for a foundation or ensconced on the set of one of her many film and television projects—like the much-anticipated live-action movie Dora and the Lost City of Gold (out August 9), or the big-screen comedy 24-7 that’s in the works, with Longoria coproducing, directing, and starring opposite Kerry Washington.

But there’s one title Longoria doesn’t covet at all: parenting influencer. Sure, the Hollywood powerhouse has legions of Instagram followers and is a hands-on mom to her son, but she has no aspirations to be an expert. “I aim to be a good mom to Santi, but as far as having opinions and really planting my flag in the ground and saying, ‘This is the system I use and everybody should use it,’ I’m definitely not doing that,” Longoria says. Of course, whether or not she’s got Santi’s bedtime or breakfast routine on lockdown, Longoria is undoubtedly #momgoals. She has a bottomless capacity to empathize, and she is an unstoppable force for good.

Longoria even turned Santi’s Instagram birth announcement into a call to action against the “zero tolerance” immigration policy that separates children from undocumented parents who cross the Mexican border. (Longoria is from Texas, and her husband, media mogul José “Pepe” Bastón, is Mexican.) “In light of my son’s birth, I wanted to bring focus on the families that have been separated at the border. Having my son next to me, I cannot imagine him being taken from my arms. Families belong together, which is why we must do what we can to reunite them,” she wrote beneath a photo of herself holding her newborn two days after his arrival.

A year later, Longoria can connect with their pain just as deeply. “I can’t even fathom losing my child to the system and never seeing him again. I couldn’t even write that post without crying,” she recalls. Longoria traveled with other actors to the border at Tijuana, Mexico, in March to witness one of the migrant shelters firsthand. “Santi was with me when I went,” she says. “He didn’t go into the shelters, but he’s always with me.”

Bringing Santi along isn’t just about convenience or bonding. Longoria wants him to soak up the work she does and the causes she holds dear. He’s a mainstay on her sets—including the just-launched ABC television series Grand Hotel, for which she hired a predominantly female production crew—because surrounding Santi with strong, independent working women helps expand his social consciousness, she explains. “I feel there’s more pressure to raise a good man today in this world and to make sure he understands equality and feminism,” Longoria says. “But it’s not about telling him, it’s about showing him in his everyday life.”

Please Let My Family Stay Together

As one of the founders of the Time’s Up movement calling for “safe, fair, and dignified work” for women in the entertainment field and beyond, Longoria has been an outspoken advocate for women in front of and behind the camera. And motherhood has only made her more passionate. “I do think there has to be a normalization within Hollywood to make sure that motherhood is accepted in a wider way,” Longoria says. “Many times, [after becoming a mom] you no longer get the sexy roles, or you have to take time off until you’re looking a certain way.”

Santi was meant to be with me at this stage in my life. I’m patient, I don’t work as much—even if it doesn’t seem that way! It’s the right time.

Longoria herself returned to work fairly quickly post-childbirth. Six weeks after Santi’s arrival, she was in the director’s chair. “Going back to work was hard. Breastfeeding while working was hard, just for the timing of the pumping and the feedings and the sleeping and the not sleeping,” Longoria admits. “You just do it and get it done.” It helped that Santi has been a dream baby, she says. “He’s healthy, he’s funny, he’s sweet, he sleeps, he eats—he’s made it easy for us,” Longoria says, adding that he’s been to four continents in the span of a year.

But even Longoria wrestles with work-life balance. “I will pass on a project if I can’t give it my all. Now I have to be more in charge and more structured and on time,” she says. Longoria knows that whether she’s at home or at work, time is her most precious resource. “The stakes are higher now that I have a child. I need to make sure I’m doing my part to leave the world a better place—for him and for all the children of our future.” 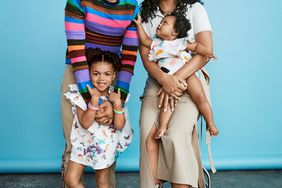