As the holidays approach, Critter Fixers: Country Vets stars Vernard Hodges, DVM, and Terrence Ferguson, DVM, have a message for pet owners: as tempting as it is to feed them some of your meal, don't do it. It's a reason why furry patients end up at Critter Fixer, their veterinary clinic in rural Georgia, with gastrointestinal problems.

Their popular veterinary hospital is getting ready to open its door to animal lovers for Nat Geo Wild's Vetsgiving—an annual weeklong celebration (November 22 to November 28) showcasing its veterinary shows to honor the professionals making a difference in animals' lives.

While caring for creatures of all kinds is front and center of their show, Dr. Hodges and Dr. Ferguson are also making a difference elsewhere: they are continuing to inspire Black and Brown children across the country to follow in their footsteps. Nearly every day, parents and children reach out to the famous veterinarians to say they are inspired by them. Some even drive hundreds of miles to meet them.

"So many parents tell us, 'I always wanted to be a veterinarian, but I didn't know where to go,'" explains Dr. Hodges, author of Bet on Yourself: From Zero to Millions. "They didn't have access to a veterinarian of color…and they don't want that same thing to happen to their child."

Statistics show about only two percent of veterinarians are Black. And it's become a mission of the longtime friends, both dads themselves, to show Black and Brown youth that their dreams can be a reality.

That begins with exposure to the profession. Dr. Hodges and Dr. Ferguson spend time engaging children interested in becoming veterinarians. Beyond phone calls and visiting schools, they've already helped dozens of youths become veterinarians through mentorship or training. They've also started a program called Vet for a Day where kids get to spend the day with them learning about the daily tasks of being a veterinarian and what it takes to become one. The latter includes four years of undergrad with a science-related major to fulfill prerequisites, followed by four years of veterinary school. Their hope is to roll out the program to various cities across the U.S. to reach as many kids as possible.

But they also aim to educate parents too, who oftentimes, as Dr. Ferguson points out, may not know much about the profession or how to help their kids pursue it. "If you had a kid and he mentioned that he wanted to be a veterinarian, and you as a parent are not as knowledgeable about how to become a veterinarian, what a veterinarian is—especially if you're Black you may not have ever even seen one—a lot of times you would steer him toward other [medical professions] like dentistry or human medicine," he says. "A lot of times that happens just because they haven't been exposed to it."

How to Help Your Child Realize Their Big Dreams

Naturally, their own kids are following in their footsteps. Dr. Hodges 17-year-old son is pursuing the field as is Dr. Ferguson's 19-year-old daughter (he jokes he's still trying to convince his 18-year-old son to become a veterinarian too). But for other parents, the Critter Fixers suggest they encourage and support their kids who show interest in helping animals. A good step is having them volunteer at veterinary clinics while they're in high school. "Just getting the totality of what it is and finding a mentor, a veterinarian, that can help steer you and tell you the things that are important and guide you," says Dr. Ferguson, author of the children's book C Is for Critter Fixer. That can also give them a jumpstart in undergrad to know what classes to take to be able to apply for veterinary school. A head start is important since the field is very competitive—there are only 32 accredited schools of veterinary medicine (CVMs) in the U.S. as opposed to more than 100 medical schools.

Of course, a love for animals comes with the territory. For Dr. Hodges that started as a young boy in rural Georgia who enjoyed heading to the river and seeing fish, frogs, and turtles. Dr. Ferguson knew he wanted to be a veterinarian since he was about 7 or 8 years old after he helped a dog that was hit by a car.

The two later met in Fort Valley State University, formed a bond, and then went to veterinary school at Tuskegee University College of Veterinary Medicine, the only veterinary medical professional program at a historically Black college or university.

Outside of their clinic, they are proudly wearing another hat: farmers. They bought a 150-acre farm together and are raising black Angus cattle. "We just love animals," says Dr. Hodges. "Now we are not only veterinarians but Black farmers too, which is a rarity as well."

Season 3 of Nat Geo WILD's Critter Fixers: Country Vets is coming in spring 2022, and previous seasons are available on Disney+. 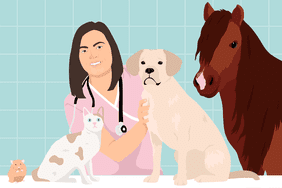 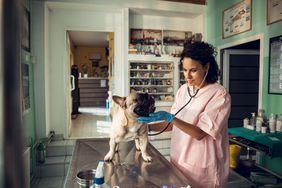