A Guide to Playground Etiquette

Getting along with other kids -- and parents -- at the jungle gym isn't child's play. Here's your official etiquette guide.

When my son was a newborn, I had a serious case of playground envy. I'd walk by the park, Benjamin snug in his Baby Bjorn, and watch as kids played and their moms chatted with one another. Maybe it was because my baby's idea of fun was batting at the stuffed elephant dangling from his activity mat -- or because the only adult I'd spoken to in days was a telemarketer -- but to me this scene was more idyllic than a fabric-softener commercial.

How to Break Into Playground Cliques

Fast-forward two years: Now that Benjamin is old enough to join in on the fun, I've discovered that the playground isn't quite the toddler utopia I'd imagined. Kids steal toys, hog the swings, and think nothing of pushing each other aside on their way through the crawl tunnels. To get a handle on how to deal with these sticky situations and more, I talked to etiquette experts and been-there-done-that moms. Here's their wise advice.

A couple of minutes after you start pushing your 5-year-old daughter on the swings, a line forms. Should you immediately give up your spot?

What to do: No need to instantly put an end to the fun, but you shouldn't let her continue to swing for more than a few minutes. "This is a good opportunity to teach your child about the importance of taking turns," says Leah Ingram, author of The Everything Etiquette Book: A Modern Day Guide to Good Manners. "Whenever this happened with my daughters, I'd say something like, 'Okay, you get five more minutes or 20 more pumps.'"

Unfortunately, not every parent is going to be this considerate. When one of Layla McHale's children is at the back of a line that isn't moving, the mom from San Jose simply explains what should happen in a very audible voice. "I'll say -- loud enough for other mothers to hear -- 'Kylie, you have to wait a couple of minutes. I'm sure the other kids will finish up soon so that you can have your turn.'" If 10 minutes have passed and your child is still waiting, there's nothing wrong with approaching another mom and saying nicely, "My son has been waiting for quite a while. Is your daughter almost done?"

A hungry toddler hovers nearby as your son munches on crackers. Should you offer her some?

What to do: Never, ever give a child something to eat until you've asked her parent's permission. "It's nice to share your food, but it's more important to make sure that she doesn't have any dietary restrictions or allergies," Ingram says. What if you didn't pack enough for everyone? Then it's your call: Either parcel out a little bit to each child, or put away the snack until the other children are gone. Another option is to joke to the other parents that your rations are running low; more than likely someone will immediately offer up a few snacks for sharing.

As soon as you get to the park, your 3-year-old starts playing with a toy truck that isn't his. Is it okay to let him have fun with it, or should you try to give the toy back to the rightful owner?

What to do: Most parents agree that as long as no other child is playing with the truck, it's your son's for the (temporary) taking. "After all, if the roles were reversed, you'd probably have no problem letting another child play with your son's toy," says Leigh Zinman-Zimmer, a mom from Montreal. "Plus, this is a good way to teach kids how to share." Still, it's always a good idea to throw out a quick "Hey, is this anyone's truck? Can Daniel use it for a few minutes?" to the moms and dads standing nearby. Most likely they'll immediately give the okay.

Some toys, however, should be off-limits to your child -- especially anything belonging to an infant, such as the toy bar attached to his stroller. "I get really uncomfortable when older children -- whose hands can get filthy at the playground -- try to touch my 2-month-old or her toys," says Karie Newman, of Marlton, New Jersey. "Luckily, most parents are considerate enough to step in and move their child away or distract him with another toy."

A rambunctious 6-year-old is monopolizing the slide and pushing ahead of smaller children (yours included) who are waiting for a turn. His mom doesn't notice because she's chatting on her cell phone. How should you handle this?

What to do: Calmly, but in a firm voice, ask him if he would let some of the other kids have a turn going down the slide. "Just remember, it's not your place to discipline another person's child," says Jacqueline Whitmore, founder and director of the Protocol School of Palm Beach, which teaches etiquette to adults and children. "The most you can do is ask him to cooperate with you." If he does, great. If he ignores you, tell his mother she needs to put the call on hold and deal with the situation. The most important thing: Don't wimp out or apologize if she's annoyed with you. "It's not your fault that her child is behaving badly," Ingram says. "Simply say something like, 'My daughter wants to go down the slide but your child won't move from the bottom. I don't want him to get hurt, so it would be great if you'd ask him to get up.'"

You see a parent putting her toddler on a piece of equipment clearly meant for the school-age set. Should you say something and possibly make her angry, or just stay quiet and hope the kid doesn't bust his head open?

What to do: "It's far better to politely say something than risk having a child hurt himself," Whitmore says. "Just be as gentle and nonconfrontational as possible. Try saying something like, 'I'm sorry to interrupt, but I'm afraid that your child is going to fall off that seesaw. I've seen so many accidents on it -- even with older children.'"

While no mother likes her parenting skills called into question, you may be surprised to find out that the mom didn't realize her child was in danger and that she appreciates the word of warning. Mirav Navi, of Brooklyn, didn't think it was a big deal when two of her children poured water onto the slide before going down it -- until another mother got involved. "She told me that a child had recently gone to the hospital after doing the same thing," Navi says. "Now I always speak up when I see a child doing something that is potentially dangerous."

Your newly potty-trained 3-year-old announces he has to pee. But the closest bathroom is at a Starbucks a half mile away. Do you let him go outside?

What to do: Although you're sure to offend someone, necessity trumps etiquette in this case. "There's not much you can do but take your child far off to the side -- or into the bushes -- and let him go the bathroom," Whitmore says. Always come prepared with wipes and a change of clothing in case things get too messy. If you regularly visit a playground that doesn't have a bathroom, consider buying a portable potty. "All the moms in my mommy group bought a travel potty from rightstart.com -- it's a training toilet that folds into a little briefcase," McHale says. "You just put a plastic bag in the bottom and throw it out when your child's done."

Not all playground equipment is made for all kids. In fact, most injuries happen when children fall off equipment designed for older kids. These guidelines will keep your little one safe.

Source: National Program for Playground Safety at the University of Northern Iowa. 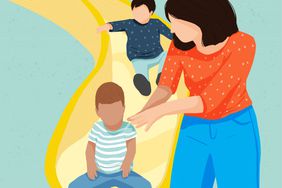 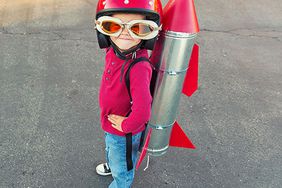 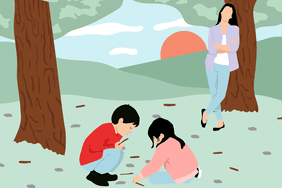 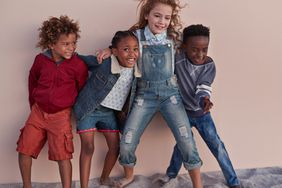