Parenting alone after a partner dies complicates the already challenging process of grieving. Here's what experts and parents who have been through it suggest.

Tami Kamin Meyer is an Ohio attorney and freelance writer. She is a member of the Columbus Bar Association's Board of Editors and is active in the American Society of Journalists and Authors. In fact, three days before the ASJA conference in Manhattan in May 2019, Kamin Meyer unexpectedly found her boyfriend of six years dead in the shower of their NYC hotel room on the morning of their sixth anniversary. While the couple never married, Kamin Meyer very much considers herself a widow.

When Melissa Gould's husband Joel Oberstein died in 2013 at 50 due to West Nile virus and multiple sclerosis (MS), she instantly became what she calls an only parent to the couple's then 13-year-old daughter, Sophie.

Gould, an Emmy-nominated screenwriter and author of the 2021 memoir Widowish, didn't want her sorrow to overshadow the devastating loss Sophie was enduring, so she tried to "cultivate a positive attitude toward grief." But it wasn't easy for the then 46-year-old. "As a widow, parenting is 24/7, with no break, no reprieve, no weekends off," she writes in her book. "You are on duty 100 percent of the time." There was a lot of pressure to parent Sophie alone, particularly since Oberstein had been very involved in her life. "I was responsible for everything," Gould tells me.

A partner can die at any age, but it's understandably not something many couples think about before midlife. "It's not anything you would expect to experience at such a young age," explains Evelyn White, Ph.D., a licensed professional clinical counselor in Columbus, Ohio.

Navigating the grief is challenging by itself. Adding the responsibility of parenting to the mix, the surviving partner has been dealt one of the most challenging and emotional blows of their lives. And with more than 140,000 children under 18 losing a caregiver due to the COVID-19 pandemic, it's sadly been a reality for many American families. As unimaginable as it is, there are effective strategies for parents to use to cope with the death of their partner.

Like other parents in her situation, Gould tried to find ways to distract her and Sophie from the death. In the first year following her husband's passing, she felt travel might help. "I thought if I just kept us busy, busy, busy and distracted…maybe we would forget for a few hours just how hard it was to move through life without Joel," she writes in Widowish.

Zoe Fishman took a similar approach after her 44-year-old husband suddenly died from a brain aneurysm in 2017. At 40, the Atlanta-based best-selling author was instantaneously thrust into the role of solo parenting the couple's sons, who were 5 and 2 at the time. Her primary mechanism for coping with the tragic loss of her spouse is what she calls "constant motion." For the young widow, that meant focusing on the daily responsibilities of running a home and parenting small children, and nothing else. "Wiping counters, sweeping the floor, folding the laundry, doing the dishes, emptying the dishwasher, changing the light bulbs, boiling the pasta. It never stops as a single parent. Not for one second."

Says Fishman, author of the critically acclaimed novel Invisible as Air, "When we're moving and active, we focus on that and our lives."

While acknowledging how constant motion can distract a survivor from their grief, Dr. White doesn't agree with it as an overall coping strategy. "It can be helpful, but in balance," she says. "We must be consciously aware of our feelings as they are moving through or else these feelings can recycle, reappear, and manifest in different ways."

Avoidance coping is common, but long-term and over-reliance on it can lead to complicated grief, a condition referring to "recurrent distressing emotions, avoidance of reminders, and intrusive thoughts about the loss of a loved one," according to research published in the Journal of Loss and Trauma.

Incorporating the deceased in one's daily life rather than avoiding sad memories can be more helpful in the long run, says Dr. White.

"Transitioning from a loving, two-parent home to one where suddenly only one parent remains is frightening for children," says Dr. White. "It is imperative to their sense of security to retain as much consistency as possible." Even little consistences, such as keeping bedtime routines or continuing the same tradition of Friday night pizza, can be comforting and bring much-needed stability.

Experts suggest surviving parents avoid major life shifts for about one to two years following the death. A major life shift can be anything out of the ordinary, says Dr. White. Consistency can offer a much-needed sense of security and reassurance, which was the case for Gould's daughter. "I wanted things to feel 'normal' for her even though our lives were now far from normal," says Gould. Two years after the death, she adds, "we were used to how surreal our lives had become."

Of course, losing a partner can come with additional stress beyond grief, such as financial burden from losing an income. In cases like that, making a big change like moving to a more affordable home may be necessary.

"Sometimes, tragedies cause complications in our lives that demand a change in circumstance, whether that means switching jobs, moving houses, school districts, or altering after-school activities," says Dr. White. "If your children are old enough to understand, be honest with them about what lies ahead without scaring them with every last detail. They don't need that additional stress."

Parents should also make sure to acknowledge their child's anguish and reassure them of their love and support. Make sure to keep open lines of communication with your child, especially taking the time to listen to what they're thinking and feeling.

It's best that parents avoid leaning on their children after the death of their partner. Instead, they can find support from a peer group. Social media is a great source for finding virtual communities to connect with others who are also grieving. Two Facebook groups include the Widows and Widowers Grief Support Group and the Young Widows/Widowers Support club.

Parents should also allow themselves to ask for help and lean on relatives and close friends during the grieving period. According to Fishman, the assistance she received from family and friends immediately following her husband's death was lifesaving.

"When my husband died, my community rallied around me. From food to money to care for the boys to housecleaning to yardwork," she says. Moreover, her parents relocated to Atlanta from their home in Mobile, Alabama, as did her brother, who moved from Dallas. "Never have I been so humbled and never have I learned so much about what being an ally really means. I could not have gotten through that year without their help."

Grief counseling, or bereavement therapy, can be a very useful outlet for parents coping with the sadness of losing a partner. "It is vitally important not to tamp one's feelings down, because that can lead to emotional problems later on," says Dr. White. "Therapy invites a person to think about their feelings and learn positive, effective ways to feel and acknowledge their grief without allowing it to become overwhelming."

Therapy can also be beneficial for a grieving child. "Children drowning in grief over their parent's death may not want to burden their living parent with their sadness, depression, and more, so speaking with a therapist gives them a non-judgmental place to open up," explains Dr. White.

There are times when therapy may be necessary for a grieving parent and/or child. That can be when grieving begins interfering with work or school months after the loss or if a person is experiencing symptoms of depression, such as a change in behavior, sleep, and/or appetite, withdrawing from daily activities, and feelings of extreme sadness or worthlessness. And of course, if a parent or child ever begins having serious thoughts about self-harm or suicide, they should seek help immediately.

Speaking with a mental health professional can also help the patient channel the negative energy they're investing in depression in a positive way. "Working through it is the only way to truly get to the other side of grief," says Dr. White.

Take Care of Yourself

Remember that it's important to take care of yourself too. Parents might be so focused on tending to their child that they will forget this, but you'll likely not do your best parenting if you don't take care of yourself emotionally and physically. Also, parents should also keep in mind that even in difficult times, you're still allowed to find joy in your lives and do things that make you happy (which likely will also help you do your best parenting). Experiencing joy does not diminish how significant the loss is; in fact, it honors the memory of your partner, who probably would not have wanted you to spend your life suffering. What's more, taking care of yourself and finding happiness in difficult times will set a good example for your child.

Embrace Changes That Can Come with Grief

It is imperative, says Fishman, to embrace and accept the deep chasm created in one's life by the untimely loss of a partner. While coping with, accepting, and adjusting to the loss is unthinkable for most, wonderful and unexpected surprises can arise from that place of extreme sadness. "Know that grief will change you from the inside out," she says.

For Fishman, it's helped in her work. "As an artist, I am a better writer for feeling all these horrible emotions." But it's also encouraged her to silence chatter that affects her well-being and no longer concern herself with other people's opinions. She's also learned to go easy on herself. Fishman's advice? "Do your best." 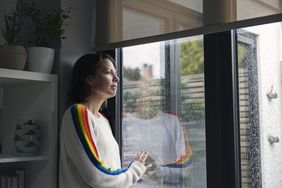