My epic freakout wasn't my finest parenting hour, but it taught everyone in my family how to better handle mistakes. Here's what I learned.

Someone just threw a tantrum in the middle of the kitchen, and it wasn't my son.

It started over spilled milk (I'm not even kidding). My son Jackson wanted a refill with his dinner. But wasn't he always saying how he wants to be more independent, and wasn't I guilty of coddling my only child? Well, here's your chance, I thought.

I instructed my 10-year-old to help himself. His chair scraped back from the table. Before I could offer a word of caution about overfilling his glass, it was too late. Milk cascaded from the countertop and pooled onto the hardwood floor like something from a horror film.

In the white glare, I roared at him. Then, fists clenched, I turned on my heel and stormed out of the kitchen. Jackson stared after me, dumbstruck, while my husband rushed in to take over. The room went horribly quiet.

How to Stop Yelling at Your Kids

A decade into motherhood, I am usually adept at keeping calm in a crisis. But who am I kidding? This wasn't even a crisis, not even approximately. In the heat of my anger, I overreacted and embarrassed myself. I'm not proud of my performance in the kitchen that day, but I wasn't the first grown-up to get caught behaving badly. Still, it was uncharted territory for me.

There is no Supermom. She's as mythical as Barbie and Tinker Bell.

In our home, I am the perpetual peacekeeper. I am the one gently reminding my son to "use his words" and "take deep breaths.” The one urging my hot-headed husband to "take a walk" and "pick your battles.” And yet something tripped my wire—a puddle of milk.

As I disappeared upstairs, pacing and muttering, my rage quickly dissipated into its equally ugly cousin—shame. What are you so angry about, I asked myself. But I honestly didn't know the answer. Nonetheless, the heat in my chest felt like it could detonate with the least provocation. A mom bomb. Even the resident bulldog tiptoed around me. Could it be perimenopause? (I could almost hear Jackson ask, "Who's Perry Many Paws?") But, more importantly, what could I do about it?

After apologizing to my husband and loading a bunch of sopping wet tea towels into the wash, I poked my head into my son's room. "Hey," I said softly and asked if I could come in. So many times I had regaled him with the "nobody is perfect" speech. And Jackson, who is already extremely hard on himself, would simply shake his head. "That's not true," he rallied, "all grown-ups are perfect." I guess he finally had proof that he was mistaken.

I explained that while adults may generally seem pretty good at handling most of the stuff that gets thrown at us, every now and then we get it spectacularly wrong. Yes, even me. I reassured him that he wasn't in trouble. Spilling milk is obviously an accident and in the grand scheme of the world's problems, a trivial one at that.

Sitting on the edge of his bed felt like a strange reversal. A fall from grace, almost. Even if my pride was hurt, Jackson had to know—and I had to remind myself—there is no such thing as perfection. There is no Supermom. She's as mythical as Barbie and Tinker Bell.

Admittedly, that scene in the kitchen was not my finest parenting moment. Although it sounds counterintuitive, seeing me act that way was actually good for Jackson. As kids develop and become more sophisticated, they come to realize that mom and dad aren't perfect, and parents inevitably fall off the pedestal. Adults can and do screw up; it's how we handle the fallout that matters. Even experts agree.

"Kids learn from watching us recover from our mistakes,” says Laura Markham, Ph.D., a clinical psychologist who runs Aha! Parenting, a website helping parents raising children of every age.

Luckily, there are ways to handle the situation:

"First, acknowledge that your behavior had an effect on your kid—even if they can't acknowledge it themselves—and that it must have been scary for them," says Dr. Markham. If they did something egregious, you can point out that, say, hitting their sibling is never OK, but they didn't deserve to get yelled at. "You are showing them there's a more effective way to enforce limits in a calm, mature way that models how to handle a disagreement with another human."

Reassure the child that your outburst had nothing to do with them, then say you are sorry. While it's fine to give a reason for your actions (like having a hard day at work), Dr. Markham advises against making excuses.

Above all, it's important to show your child that you have learned from your mistakes and will work hard not to repeat them. "You want to let them know you won't do it again," says Dr. Markham. "It's not business as usual. You have a plan."

On the edge of Jackson's bed, I took a deep breath, and apologized. Ultimately it wasn't about the milk. It never is. 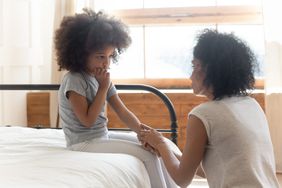 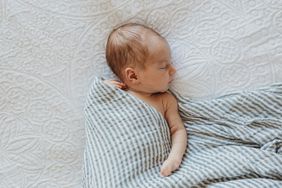