More than 40 percent of us live in an area plagued by air pollution. The group affected more than others? Latino children. This is why—and what's being done about it.

In the summer of 2018, Columba Sainz and her husband, Eduardo, were house hunting in Phoenix. The Mexican-American couple and parents of two at the time ended up falling in love with a home in South Phoenix that was near a day-care center, close to work, and across the street from a park.

Within a few months, their 2-year-old daughter, also named Columba, started wheezing at night. The pediatrician suggested an inhaler. Before long, other members of Sainz’s family, including their then 1-year-old, Alissa, also began wheezing and got nasty colds that would last for more than a month. Again, the doctor prescribed inhalers. He also tipped Sainz off to the fact that Phoenix’s poor air quality was to blame. She began to use a local app that measures air quality to determine whether the air outside was safe to breathe. Many days, it wasn’t.

5 Signs of Asthma in Kids

Sainz and her family are among the growing numbers of U.S. citizens affected by air pollution, a mix of particles and gases that makes the air unhealthy to breathe. More than 141 million people (43 percent of all Americans) live in counties with unhealthy levels of air pollution, concluded the American Lung Association in its 2019 State of the Air report. Arizona’s Maricopa County—where Sainz lives—received an F for its air quality.

Unhealthy air can trigger asthma and seemingly unrelated conditions, such as heart disease and depression, according to pediatrician Aaron Bernstein, M.D., M.P.H., interim director of the Center for Climate, Health, and the Global Environment at the Harvard T.H. Chan School of Public Health. Children suffer the most. In fact, about 80 percent of a child’s lung tissue forms after birth. Kids are usually outside more than adults are. They are also more active in general, which means they inhale more polluted air. In addition, children are physically closer to the ground, where pollutants are at their highest concentration.

The group most disproportionately affected by poor air quality? Latinos. That’s one reason that Sainz wanted to spread the word. Her first step was to join Moms Clean Air Force, a nonprofit made up of more than 1 million parents fighting against air pollution.

“We want our community to be aware of how we’re affected by this problem,” she says. “There’s nothing we won’t do to protect our children’s health.” What Sainz has learned can help all families take action.

A Community at Risk

Latinos are particularly vulnerable to climate-related threats because of where they live, according to Nuestro Futuro: Climate Change and U.S. Latinos, a 2016 report from two environmental nonprofits, Natural Resources Defense Council and Voces Verdes. More than 60 percent reside in California, Texas, Florida, and New York—the same states hit hardest by air pollution. Anyone living in low-income communities, like Sainz, is probably also exposed to higher levels of pollution. For one thing, housing near a busy roadway, factory, or power plant is cheaper, says Dr. Bernstein, and it tends to have fewer pollution-absorbing trees and vegetation around it. In the case of Sainz, her home was near two huge parking lots for municipal buses and within striking distance of an airport.

What’s more, over 30 percent of Latinos live in an area that violates federal air-pollution standards for ground-level ozone, a chemical linked to a host of health problems, according to the nonprofit Clean Air Task Force. Ground-level ozone is most commonly created when chemicals emitted from vehicles, industrial boilers, refineries, plants, and other sources react in sunlight.

Scientists measured these and other particles for a 2019 study published in the journal Proceedings of the National Academy of Sciences of the United States of America; they concluded that Latinos actually inhale 63 percent more air pollution than they create. For non-Latino whites, the figure is 17 percent less air pollution than they produce.

Latino children bear the brunt of this racial inequity, with 8.5 percent of them diagnosed with asthma compared with 7.9 percent of non-Latino white children. The number of school days missed by Latino children each year because of health issues related to ozone pollution is a staggering 112,000.

Putting the Pieces Together

As she met more and more moms in her neighborhood whose families had experienced respiratory issues, Sainz embarked on a fact-finding mission. “I started connecting the dots,” she explains. It dawned on her that living near the downtown area was more of a health hazard than a convenience. She was crushed that her family had moved into a home in what was clearly a polluted neighborhood. “When you search for a house, air quality is one of the last things on your mind,” she says.

She wasn’t even spared in her own home. “Air filters should be changed every two or three months, but we needed to change ours every two weeks,” she says. That park outside her front door—which no one seemed to use—was another source of stress. “My daughter would point to it because she wanted to go there,” she recalls. “How do you tell your kids they can’t spend much time outside? How do you explain air pollution to children?”

Those questions led Sainz to Ecomadres, a program of Moms Clean Air Force (in partnership with other Latino organizations) that gives Latina mothers the opportunity to take action—through events, conversations with legislators, and more—to fight for safer and cleaner communities. Sainz now shares her story with other parents and encourages them to do the same. And she lobbies her representatives in Congress. “We empower mothers to speak up,” she says.

Even as an increasingly informed advocate, Sainz still struggled with her family’s living situation. “When I shared my story, one thing I’d hear was, ‘Why don’t you just move?’ ” says Sainz. But she and her husband had already moved a few times in recent years. And then Sainz became pregnant with her third baby. Last September, her family—which now included 14-month-old Eros—did relocate to a new home about ten minutes away. The air quality is marginally better, and her family isn’t sick all the time anymore.

Groups such as Ecomadres are part of a positive trend: People are coming together to spread awareness about air pollution, especially about how it affects Latinos. And they’re fighting for change. Take, for example, Voces Verdes, a national network of individuals and organizations that actively support sustainable environmental progress. Its members testify at congressional hearings and meet with legislators.

In California, which has six cities with the highest levels of pollution in the entire country, one such group is Comite Civico del Valle, Inc. (CCV). A nonprofit founded on the principle that “informed people build healthy communities,” it aims to spark civic engagement among Latinos. The organization launched IVANOnline.org, a site where residents can sign up for air-quality alerts and flag environmental concerns in their area. (For instance, if a parent or teacher notices a strong smell of pesticides reaching school grounds, she can report it online, and it will be investigated.) One key area of focus is asthma.

“It’s a very costly chronic illness that affects the whole family,” says Esther Bejarano, director of Asthma Programs for CCV. She and her team of community health workers provide asthma education in homes and schools and throughout Latino communities. They teach how to track air quality, reduce asthma triggers, and correctly use asthma medications.

The result? A community that’s not only engaged but healthier. Bejarano reports that children’s school absences and ER visits are down. “People in the community opened their homes to us, and we can see real results,” she says.

Sainz continues to be a leader in her own right. “It’s a team effort, but we’re making a difference,” she says. Her current focus is supporting the 100 percent Clean Economy Act of 2019. (A clean economy, in short, is one that functions by adding fewer pollutants to the environment than it removes.) This ambitious legislation in the U.S. House of Representatives, which has more than 150 cosponsors, aims to meet its goal by 2050. “We need support from our federal leaders,” Sainz says. “They’re parents or aunts and uncles, and the environment is affecting their families too. It’s crucial that we’re all on the same page.”

This article originally appeared in Parents Latina's April/May 2020 issue as “Clean the Air.” 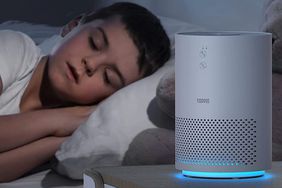