Dealing with one kid in diapers is tough enough, but add in an infant and it can be complete chaos. Learn what it's really like to raise two kids under 2 years old.

I'll never forget how my 22-month-old reacted when we brought her brother Tommy home from the hospital. I wasn't even supposed to hold her, because I was still recovering from a C-section, but Katie looked so in need of a hug that I scooped her up and held her tight. Then I took her to look at the baby. The next thing I felt was pain—she'd bitten me on the shoulder.

At that moment it became clear: Navigating life with two kids under age 2 was going to be tricky. That's not to say it isn't amazing, too. There's nothing more heartwarming than seeing your toddler fall in love with the baby and, though she's still in diapers herself, take on the role of big sister and protector.

Real Life Problems of Having Two Under Two

But when you're trying to avert a massive tantrum while calming a colicky newborn who won't let you put him down, what you really need is practical advice for getting through it. That's where these real-life, real-mom solutions come in.

On handling two sets of needs at once

My 15-month-old had diaper blowout just as the baby was howling. I didn't know which problem to solve first. I was almost in tears myself!" –Andrea Canning; New York City

How to deal: Keep this mantra in mind: There's only so much I can do, so just handle the greater need first, recommends Joanna Cormier, of Quincy, Massachusetts. That's the right approach, say the experts. Try to prepare for those "everyone needs me" moments: Set up baby-changing stations around the house and keep healthy snacks handy so you can quickly soothe your toddler. And if one kid has to wail for a minute while you tend to the other, remember: "This is where kids learn life lessons like how to share and wait their turn," says psychotherapist Yael Sank, of Soho Parenting, a family counseling center in New York City.

"Nursing my firstborn was great, but with Ava it was like, "When can I be done?' because I always had a 23-month-old pulling at me." –Lisa Brewer; Presque Isle, Maine

How to deal: Even a toddler who likes her new sibling is apt to get jealous. "Remember, 18 months is the start of a tough stage. A child is experiencing the emergence of will, but she doesn't have the words to tell you what she wants," says Parents advisor Jenn Berman, Psy.D., author of SuperBaby: 12 Ways to Give Your Child a Head Start in the First 3 Years. Throw a new baby into the mix and of course she's going to act out. In fact, one of the biggest mistakes parents make is not allowing their firstborn to have negative feelings toward her new sibling. "If your toddler tries to hit the baby, or says, 'I don't like her,' the worst thing you can do is say, 'Yes you do. Be nice,'" Dr. Berman explains. Instead, validate her feelings by saying, 'I know it's hard to share Mommy,' and then sit down together to cuddle. "One-on-one time is the best inoculation against acting out," says Dr. Berman. Another way to guard against jealousy is to encourage your child to be involved with the baby.

Of course, none of this helps much mid-feeding, so you just might have to grin and bear your toddler attempting to get your attention. Your best bet is to try to distract him by keeping a basket of special toys and books that only come out when your boobs do.

On dealing with guilt

"I sometimes feel bad for our 6-month-old, because we're so focused on our older son, who is very active and grabs our attention." –Caryn Winkler; Arlington, Virginia

How to deal: It's impossible to be the same mother to your second that you were to your first, but that's probably for the better, says Hull. "With your first, chances are you were constantly fretting over him; children don't need that kind of laserlike focus."

On the other hand, perhaps you're worried that the newborn has rocked your older child's world. Good news if she's under 16 or 17 months: She might not notice much. Young toddlers are in a great place: They're happy with themselves, not yet pushing the boundaries of their independence and kinda clueless about how a new baby might affect them.

If your firstborn is 18 months or older, life probably won't be so rosy. But you can do things to make the transition easier. "No matter how young he is, prepare your toddler for the newborn's arrival – and revisit the topic in the months following it," says Dr. Berman. By talking about it you reassure him that everything is okay. "Read books about having a new sibling, buy him a doll to play with, and explain how things will be different – but also emphasize what will be the same." You may also want to consider enrolling your older child in a big-kids-only activity.

Raising Your First vs. Your Second Child

"I'm 'on' all day, carrying my girls around, changing diapers, racing to run errands only to race home for naptime. By the end of the day, I feel like I've been hit by a truck!" –Michele de Bourbon, New York City

How to deal: First, remind yourself that you're doing the best you can. Then, remember that if you try to do it all alone, you're headed for burnout. Hire a sitter or lean on friends, even for an hour. If that's impossible, carve out downtime during the day.

On leaving the house

"Before I leave the house, I have to nurse Kip, change him, and get him in the car seat – and if I'm too slow my toddler grabs my keys and runs wild. Then comes the hard part: carrying everything and everyone to the car!" –Lisa Farrell; Chicago, Illinois

How to deal: First, leave extra time to get where you're going. Second, stop lugging a diaper bag and keep your car stocked with anything you might need, from diapers to snacks. Third, think about how you'll get from the car to your destination: Are you happiest with your infant in a BabyBjorn while you hold your older child's hand? Is a double stroller more your style? Just put safety first – if your toddler can't be trusted to not dart into traffic, strap her in.

Also consider where you're going, says Jennifer Bingham Hull, author of Beyond One: Growing a Family and Getting a Life. "With a toddler spilling orange juice while you try to nurse the baby, that coffee shop you used to frequent with just one may not be a good fit," she says. So seek out places that are meant for young kids and the noise and mess that goes with them, from storytime at the library to the local park. And don't feel ashamed if you suddenly become a homebody: There's nothing wrong with staying in your backyard and having another mom and her kids over when you need to socialize.

On being frustrated with your partner

"Both my husband and I had a full-time job, yet arranging child care, food shopping, and planning dinners still fell to me!" –Cara Gately; Darien, Connecticut

How to deal: Even if your partner is trying their best, there will be days that you think your marriage is imploding. "Suddenly, there's more to do and less time to do it in. And in many a mom's eye, the father could always be more involved," says Sank. So talk with your partner about how you're feeling and come up with ways to make things better. Also seek out other parents with young kids. "Female friendships are key. You can have 'aha' moments like, 'Gee, your husband's driving you nuts too?'" says Dr. Berman. "Laughing about it makes a huge difference." Finally, remember to make time for just you and your husband.

The Plus Side of Having Two Under Two

Despite all of the hectic situations you'll encounter, there's still lots to cheer about when you've got two under 2.

They may be extra-close

Siblings who are closer in age often have more in common, which can bring them together from the start.

Tough stuff is over faster

It can be a relief to get the challenging baby and toddler years done in one fell swoop. If you're stepping out of the workforce to stay home while your kids are little, you can get back into the swing of things in 5 or 6 years without missing any of those first words.

Having kids closely spaced often offers logistical benefits. If they're close in age, they can probably take the same music classes and go to the same storytimes. They'll even go to school together at some point.

When to Have Second Baby, According to Experts and Moms
Was this page helpful?
Thanks for your feedback!
Tell us why!
Related Articles 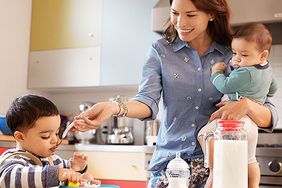 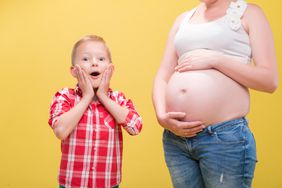