This Year, My Parenting Resolution Is To Do Less

If your ever-growing to-do list has become overbearing, you're not alone. Here's why we need to sit back and take a moment to breathe in 2020.

Overall, I did okay last year. I cleaned out the car, though it was blanketed in toddler toys again a month later. I KonMari'd my clothes and books, though halfway through the "papers" category—step 3 of 5—my husband and I got distracted and put the project on hold (where it still waits). I've been promoting my book—it's out now!—though I probably should have started earlier.

I never did get to the picture frames, though.

Of course, this list of "resolutions" didn't include all the other tasks I wrote on my daily, weekly, and monthly to-do lists. There was planning my son's birthday party, ordering city parking permits, making a timeline for my daughter's kindergarten class project, and ordering corner protectors for the kitchen island (this after Maggie ran directly into the edge and got a gash under her eye).

The point is, as my to-dos built up, my "resolutions" quickly just became another bulleted item on my list.

And in order to keep up with it, my insistence on multitasking grew. I became accustomed to secretly checking my work email while playing the match game with my 6 year old, or ordering a pair of sneakers for my son while we're supposed to be eating dinner (pause for detour to Zappos, because writing about the sneakers has reminded me that, yet again, he has outgrown his shoes). It's not unusual, but it's not mother-of-the-year parenting either. I'm not doing my children any favors by fragmenting my attention—my daughter may not be able to multiply yet, but she can tell when her mom is only half paying attention to her.

That's why this year, my resolution is to do less.

Research shows that what kids want is not more time with their parents, but less-stressed parents.

We live in a self-improvement culture—the collective agreement is that resolutions should be tied to being "better" in some way, to finally "getting something done." But I know from writing the aforementioned book, The Kids Are in Bed: Finding Time for Yourself in the Chaos of Parenting, that parents these days take on so much that the to-dos spill over into what could, and should, be closely guarded free time.

Researchers call this "contaminated time"—those moments when you're lying on a massage table thinking about how you forgot to fill out the documents for your will, or when you're reading a novel but zone out for three paragraphs because it occurs to you that you haven't filled out a permission slip. In an original nationwide survey conducted for The Kids Are in Bed, 71 percent of parents said their free time didn't feel free at all, because they were still thinking of everything they should be doing. That's no way to live.

9 Apps That Will Help You Keep Your New Year's Resolutions

The problem with parents taking on so much, other than the fact that it's exhausting and no fun, is that it's bad for our kids. I tell you this based on science—research shows that what kids want is not more time with their parents, but less-stressed parents—and anecdotal evidence too. In my house, the first rule for the "audience," whenever Maggie puts on a performance, is "phones out of reach." When I'm distracted with dishes, she reminds me that I promised to play with her, and the only dishes are the ones in our imaginary house. (She really loves playing family.)

A big part of the problem is guilt. We live in an age of intensive parenting, where overextended mothers and fathers are told that the more time they spend with their kids, the better off those kids will be. But science just doesn't support it. Studies show the amount of time spent with kids doesn't translate to higher well-being or more successful outcomes for those kids. And yet, as my favorite statistic about parenting reveals, working moms today spend as much time with their kids, or more, than mothers in the 1960s did. We are doing enough!

Slow Down Your Crazy-Busy Life

I'm not saying I want to spend 2020 doing nothing. But I want to do less. I want to go to work and be a present mother. I want to carve out 20 minutes to an hour most days to unwind and enjoy myself, so I can give my kids a parent who isn't so high-strung. But I'm not pressuring myself to unclutter an entire household or cook for four every night. I'm not going to chaperone the school sock-hop or take on the role of classroom mom, and—an even bigger accomplishment—I'm not going to let myself feel guilty about those things either. I don't need another job. And you don't either. Raising kids is work enough.

Of course, I wouldn't mind finally tackling those photo frames. 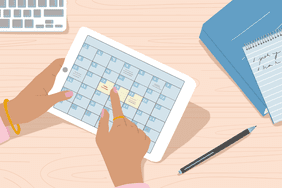 I'm a Mom and Time Management Strategist: Here's How to Toss Your To-Do List