The Pandemic Has Us 'Phubbing' Our Kids With Our Phones, and It Could Have a Lasting Impact

An experiment suggests developmental damage that can occur when too much screen time by parents interferes with child interactions. But what happens when circumstances mean we have little choice?

Seems like common sense that parents needs to actively engage with their babies to help maintain social development in infancy and beyond, right? But the coronavirus crisis has parents using screens at home more than ever before—pandemic times require intense levels of multitasking to get through each and every day. The American Academy of Pediatrics (AAP) even discourages screen time for babies before the age of 18 months, and then they recommend only educational programming (think: Sesame Street) that's viewed by kids alongside their parents. And we've heard of the negative effects (like decreased brain development and obesity) of too much screen time for our kids—but what about parents who are a little too glued to their screens?

That's where a two-minute still face experiment comes in. Developed by Ed Tronick, Ph.D., a developmental and clinical psychologist, professor of psychology at the University of Massachusetts, and director of the Child Development Unit at UMass Boston, the experiment opens with a parent actively engaging with their baby. The parent responds to the baby's noises and motions, and the baby coos and smiles in return. Then, the parent is asked to turn their head away from the baby and keep a still face upon looking back. Again, the baby interacts with the parent the same as before, but this time the parent keeps a cold, blank face. Pretty quickly the baby becomes upset, trying to engage however they can before breaking down and crying. That's when the parent breaks the experiment, soothing the baby who returns to normal pretty quickly, as if nothing even happened.

Highlighting the link between how child abuse and neglect can damage a developing child’s brain, following the groundbreaking experiment Dr. Tronick also found that positive interaction and attention can help to rewire children's brains again in a healthy way.

So where do parents on smartphones come into play? "Someone playing with a modern smartphone is exactly like a still-faced paradigm,” Caspar Addyman, developmental psychologist and director of the Goldsmiths InfantLab at Goldsmiths University of London in the U.K.., recently told Fatherly. Addyman even pointed out that parents are conducting their own still life experiments on YouTube using smartphones. The results of the copycat experiments? Distressed babies.

Addyman told Fatherly that a lack of eye contact while looking at a smartphone prevents positive parent-child interactions in the same way the original still face experiment showed. Just as consistently placing a child in front of a TV screen can have negative effects, parents being on their phones also stops them from engaging and hinders active learning and social development.

That's not to say that parents—especially working parents in the middle of a pandemic—don't have a choice but to turn on their laptops for work, YouTube Kids to keep toddlers busy for a bit, or tablets for their school-age children to learn remotely. There's no real way to get around screen time right now, and there's no judgment here on parents doing what they need to get by. Heck, I'm guilty of letting my 22-month-old watch his fair share of Blippi just to get a little work done. It happens.

But the main takeaway here should be on frequent screen time by parents that interferes with—or replaces—interactions with their children. There is a difference between responding to a text message or watching an Instagram Story in front of your kid and constantly disengaging with them because you're on your phone—or, on a more extreme level, abusing a child with no attention at all.

All you can do—especially in the age of COVID-19—is be present with your children as much as you can. Be mindful about how frequently you're using screens in your home. We're all doing the best we can, and there has to be some happy medium where screen time and smartphones play a healthy, or at least a non-harmful, role in our day-to-day lives. 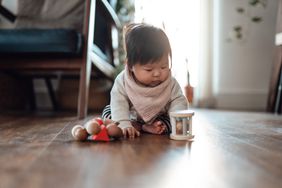 Getting Started With Independent Play 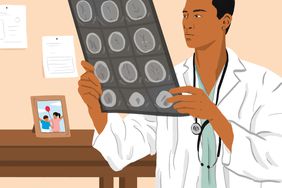 I'm a Dad and a Neurosurgeon: Here's How I Care for My Kids' Brains