Is It Ever Appropriate For My Kid to Talk Back to an Adult?

Should children stand up for themselves or talk back when an adult is disrespectful or dismissive? Here's what the experts say.

This summer, my children took up a new hobby. They spent numerous afternoons at the library assembling 1,000 piece puzzles, happily welcoming others to join them. However, several weeks ago, a young boy wandered over and began taking apart a section my eight-year-old son recently completed. My 10-year-old daughter asked him to stop, but he didn't. So she found his mother and asked, "Can you please try to make sure your son doesn't destroy any more of the puzzle? He already destroyed a huge section that my brother worked on."

The mother responded, "Your brother needs to know that this puzzle is for everybody. My son can play with it how he wants." Flabbergasted, my daughter stared at the woman then walked away.

After overcoming my shock, I wondered if my daughter could have done anything differently. Should she have stood up for herself, essentially talking back? Is there even an appropriate way for a child to respond to a disrespectful adult?

I wanted answers, so I talked to several etiquette experts and child psychologists. Everyone thought my daughter handled the situation well—walking away prevented an escalation. Then, they offered advice on how kids can talk to adults about issues that might arise.

Kids Should: Express Their Feelings

Psychologist Cindy Graham thought perhaps my daughter unknowingly put this mother on the defensive by using "you statements" instead of communicating her feelings with "I statements." But that's challenging for a 10-year-old, especially in the moment. Psychologists Laurie and Fred Zelinger agreed.

"The only other thing she could've done was describe her own feelings or what her brother would feel," said Laurie. "If she said, 'He's going to be so upset,' or 'I'm so frustrated that this happened,' the mother may have recognized those feelings and responded differently."

"Expressing what you're feeling is a non-antagonistic way to speak to somebody," added Fred. "It avoids a lot of awkward interactions, especially with authority figures."

Kids Should: Be Polite

Also, there's the approach, said Daniel Post Senning, author and spokesperson for The Emily Post Institute. Beginning with 'excuse me, ma'am' serves two purposes: getting the mother's attention and acknowledging her standing as an adult. Senning offered a way to reduce the mother's defensiveness.

"A lot of rude behavior is unintentional," Senning explained. "They may not be aware of how they're impacting someone else, or they aren't thinking about it in that way. You daughter could have responded, 'I'm sorry ma'am, I didn't mean to be disrespectful. My brother worked on that section all afternoon, and I didn't think you'd want your son doing that if you knew about it.'"

Kids Can: Ask for Help

Alternatively, enlisting the mother's help might have done the trick, according to Graham. For example: "We've been working really hard to complete this puzzle. Is there any way you can help us make sure the pieces don't become undone?"

Kids Should: Know When to Stop

Still, children must be careful when speaking to adults. If they cannot get their point across after two attempts, they should seek an authority figure.

"A child isn't going to win in a war of words with an adult," said lifestyle and etiquette expert Elaine Swann, author of Let Crazy Be Crazy. "If an adult bullies a child, the child won't win. But, an authority figure can help them get their point across."

Kids Should: Advocate for Themselves

It's critically important for children to learn to advocate for themselves. It teaches conflict resolution, personal skills and how to set boundaries.

How to Raise a Respectful Child

"It sets a precedent with the adult that they're taking the steps necessary to show you they know what you're asking or doing is wrong," Graham explained.

In fact, The Emily Post Institute has a saying: "Safety trumps etiquette." Senning believes that telling kids there are certain boundaries and limits they get to set is appropriate and important.

Kids Can: Walk Away

And if a child sees their friend or sibling being bullied by an adult, the Zelingers have great advice. "Just put your arm around them and say, 'listen, we have to leave,'" Fred suggested.

"It's very supportive," Laurie explained. "It also tells the adult that you're not going to stick around for whatever they're dishing out."

So how do we teach this to our children? It starts with modeling our behavior. From the time they're infants, we should model assertiveness and use "I statements." So when an infant pulls your hair, definitely say, "Ow, that hurts!" As they become toddlers, label everyone's feelings: he's angry because his toy was taken away, your feelings were hurt during their inconsolable temper tantrum, etc.

13 Ways to Raise a Compassionate Child

In elementary school, Graham says to discuss the three communication styles: passive, assertive and aggressive. Then act out different scenarios so they can successfully stand up for themselves. With teenagers, pull scenarios from their own experiences.

These days, our kids can be seen and heard. Their feelings and thoughts are important. But, Swann and Senning were very clear: demonstrating respect for adults is still important. 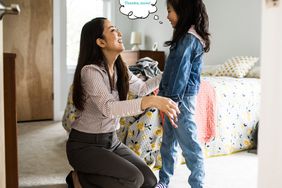 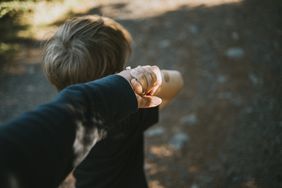