Dad Shares Easy Hack to Remember Everything About Your Kid's Childhood

It's amazing how easy it is to forget the magical little moments you assumed would get tattooed on your brain. I promise that my technique for holding on to happy memories works.

On April 17, 2016, my then 3-year-old son, Charlie, asked me why cars go so much faster when daddies drive them. Later, I told my wife, Elysha, about his question, and immediately regretted it.

That same day, after finding out that our cat, Owen, was dying and would need to be put down to end his suffering, Charlie saw tears in my eyes and said, “Daddy, don’t you know that grown-ups don’t cry?”

I remember both of those moments and many more as if they’d happened yesterday. The time my daughter, Clara, explained to her friend that she could wake up before the sun rises because “my daddy’s a writer, and writers barely sleep.” The morning that she came downstairs and didn’t sit in my lap for the first time. The morning that Charlie awoke on his fourth birthday and declared that he was going to start pooping on the potty all by himself.

I constantly hear parents say that they need to write down all the silly, sweet, and unforgettable things their children say before it’s too late, but few actually follow through. It’s a tragedy. The memories of our children are the most precious things we possess. We wouldn’t allow a dollar to pass absently through our fingers, and yet we allow these moments to pass right by us, lost in the daily grind.

As a storyteller, I must consistently generate content so I can stay onstage. And I need to tell stories about my life to keep the audience’s attention. Realizing five years ago that I might someday run out of stories, I assigned myself a simple task: At the end of every day, I would sit down and record the most story-worthy moment of my day, even if that moment seemed boring, benign, uninspiring, and not worthy of telling at all. I would ask myself: “If I were forced to tell a story from my day, what would that story be?” I called it Homework for Life.

I decided not to write the entire story down because that would require too much time and effort. Instead, I created an Excel spreadsheet. In column A, I listed the date. Then I stretched column B to the far end of the computer screen. In that elongated column B, I record my story. I intentionally limited the space I have to write—just a sentence or two to capture the moment.

I hoped that I’d find a new story every month or two. Instead, something amazing happened. By requiring myself to find a story every day, I developed an unexpectedly sharp lens for stories. I saw them where I once did not. I realized that my day was filled with story-worthy moments, both big and small, that deserved recognition and remembering.

The first time my daughter ran into dance class on her own, telling me to stay in the car.

The time my son told me that it’s not helpful when a doctor says it will only pinch but it really hurts.

The time he discovered my wife’s heartbeat and called it heart beeps.

The first (and only) time my children didn’t fight over who could sit next to Mommy in the restaurant booth.

Although I now have a spreadsheet that contains 27 pages and more than 3,500 entries, the simple act of noticing them, acknowledging them, and then recording them has cemented so many of them into my mind. But even when I can’t remember one of these memories, I can flip back to an entry, like one from March 2016 that reads: “Charlie and I rake leaves in the backyard. It feels so good to have this unhelpful little boy helping me.”

If I read that snippet now, I am right back there in the moment. I can see my 3-year-old boy struggling to wield a rake three times his size, thinking he’s helping when all he’s really doing is plowing through my leaf piles and making more work for me. I am standing in my backyard again, surrounded by leaves, watching a little boy giggle and struggle and topple over. It’s a moment that would have been forgotten.

If there were a fire in my home and I could save only one item, it would not be my signed edition of Kurt Vonnegut’s A Man Without a Country or my late mother’s recipe for meat pie (the only words I have that are written in my mother’s hand) or even Puppy, the stuffed animal that I’ve had since the day I was born. It would be my Homework for Life spreadsheet. Of course, it is now saved to the cloud in multiple locations, so in reality, I’d probably grab my mother’s recipe and apologize to Puppy on the way out. But without a doubt, the spreadsheet is the most valuable thing that I own.

Since I’ve also been an elementary-school teacher for 20 years, I feel empowered to assign homework, and so I assign it to you. You don’t need to use a spreadsheet—you can use a note on your phone or a leather-bound journal. Every day, without exception, sit down and capture one story-worthy moment from your day, even if it doesn’t seem terribly special. Be patient as you develop your own lens for stories so you can slow down time and remember these bright and hard and wonderful days with your children. You deserve this gift to your future self.

This article originally appeared in Parents magazine as "How to Remember Even More Good Times." 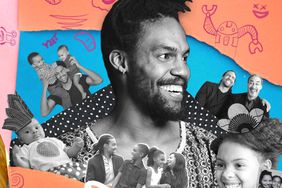