Different kids crave different kinds of attention and affection. We'll help you figure out which mean the most to your child so she can feel truly adored.

My 6-year-old son, Stuart, is the type of kid I envied growing up: sweet and obedient enough to win his teachers’ approval but fun enough to score all the birthday party invites. Yet shortly after I returned from a spring work trip, I saw him pinch a green bean between his fingers and felt something whiz by my left ear. Then he shoved his 3-year-old sister, Josephine, to the ground.

And later, he pulled the needles out of the knitting belonging to his older sister, Vivienne, letting the dropped stitches unravel to the floor. I knew he’d felt ignored that week, with me away and the girls busy on playdates. So I told him how much I loved him, again and again, but he’d shrug and walk away. I wasn’t sure how to get through to him.

That changed after I read an article about Gary Chapman, Ph.D., a marriage counselor known for his best-seller The 5 Love Languages. His theory is that we all express love, and experience it, in the same five ways—through physical touch, gifts, words of affirmation, acts of service, and quality time—but everyone has one way that matters most. It’s not enough to love your kids, says Dr. Chapman, who years later cowrote The 5 Love Languages of Children. “You have to know how to communicate love to a child so that he genuinely feels loved.”

I realized that the verbal reassurances I’d been giving Stuart didn’t mean nearly as much to him as hugs, cuddles, and other hands-on displays of affection. Now when he acts like he’s running on an empty love tank, I scoop him up in my arms or shove his 65-pound, 4-foot frame into a baby carrier, and his mood flips as if I’ve hit a switch. But I still haven’t stopped saying “I love you.” Dr. Chapman insists that kids need to receive love in all five languages. That said, knowing which is your child’s top choice can help strengthen your bond and stave off unwelcome behavior.

The first step in identifying your child’s primary love language is to pay attention to how he shows you love. Why? We all tend to offer affection in the way we wish to receive it. As we get older, we learn that the Golden Rule can backfire in our relationships because we need to give love unto others in the way that works best for them. But since kids generally don’t pick up on that, they offer the brand of affection they crave. The other piece of the puzzle is what your child requests.

Consider these five ways he might speak or ask for his love language.

Though a hug might say “I love you” to all kids, for ones who adore physical touch, it shouts, “I LOVE YOU!”

Dr. Chapman has a son who prefers this love language. “When I came home, he would run to the door, grab my leg, and climb all over me,” he says. If children are constantly in your space, touching you, or playing with your hair, that’s a signal that they need to be touched more, says Laura Markham, Ph.D., author of Peaceful Parent, Happy Kids.

Snuggle on the couch, ask your kid if she wants to sit on your lap, and offer foot massages and high fives. My own little guy has dubbed holding hands “a hug for my hand.” Dr. Chapman also suggests wrestling and playing sports that require jostling. Diana Peterfreund, of Silver Spring, Maryland, says, “I give my 3-year-old daughter loud kisses all over her head the way Cookie Monster eats a cookie. She laughs and asks, ‘More kissy monster?’” Virginia Green, of San Francisco, and her 5-year-old daughter, Eloise, have a secret handshake. When she’s experiencing some big emotions, Green says, “I’ll reach over and squeeze her hand three times—that equals ‘I love you.’”

A slap or spanking is hurtful to any child, Dr. Chapman warns, “but it is devastating to one whose primary love language is touch.” Research has also shown that dads tend to become less physically affectionate when their daughters start to develop because they feel ill at ease, says Dr. Markham. She suggests making a habit of good-morning and good-night hugs, even as kids get older.

Someone whose primary love language is gifts tends to care about how a present is wrapped, and he often remembers who gave him what for months or years after the fact. Anjali Jameson, of San Francisco, says, “One time, a grocery-delivery service sent me flowers because it had messed up my order. I spontaneously told my 5-year-old daughter that they were for her. She said, ‘You love me!’ and proceeded to tell everyone about the flowers from her parents.” Another tip-off? Your kid has trouble throwing out things he’d been given, even if he hasn’t looked at them in ages.

Your child sees a gift as a symbol of your love, and it can be anything from a very smooth stone to a ball of yarn in just the color he mentioned liking two Tuesdays ago. Although it’s fine to keep a closet full of wrapped dollar-store toys, you don’t need to spend money. Try leaving an origami creation on your child’s chair or a wildflower on her pillow. “Every year since I left for college, my mom has mailed me leaves so I can enjoy a bit of fall from home,” says Wisconsin native Skye Schulte, who now lives in San Francisco and hopes to do the same someday for a child of her own.

Stickers and star charts are also concrete ways of making these children feel valued, says Parents advisor Harvey Karp, M.D., creator of the DVD and book The Happiest Baby on the Block. On the receiving end, be sure to make a big deal of any gifts your child gives you by hanging artwork or creating a “precious things” table for those sculptures made from pipe cleaners and old corks.

“We have to be careful about overdoing gifts,” Dr. Chapman says, “and we need to give kids gifts that are appropriate for their age and that will be helpful to them, rather than just what they want.” He also says parents can be tempted to shower children with presents instead of also using the other love languages, something he’s observed particularly often with divorced couples.

For kids who listen intently and speak sweetly, your loving words matter most.

If your child beams whenever you praise her or offers you lots of sweet feedback—like when Josephine pulls me close to whisper, “Mommy, you are my favorite mommy”—she probably relishes words of affirmation.

Little notes in their lunch box, texts, and even a bracelet with something like “my hero” printed on it can mean the world to these kids. Auburn Daily, of San Francisco, says she gets down on her toddler’s level, stares into her eyes, and says, “You are the best thing in my life. You are so important to me.” Dr. Karp suggests “gossiping” or whispering loudly to a stuffed animal, another adult, or even a bird outside about something your kid did well, since research shows we all believe more of what we overhear than what is told directly to us.

Insults cut deep, and Dr. Chapman says it’s particularly important for these kids to hear the words “I love you” standing alone, rather than, “I love you, but ...” Tying those three words to anything else (including the phrase “good girl” or “good boy” as a form of “I love you, when ...”) can imply that your love is conditional, Dr. Markham notes.

Acts of service is the most peculiar-sounding love language, but kids who speak it appreciate thoughtful gestures, like buying flavored seltzer and making a mocktail complete with a mini umbrella and a pineapple slice.

He may beg you to tie his shoes for him, fix a broken toy, or fluff his pillow. As a result, parents of these kids often end up feeling like servants.

The possibilities are endless, including making exceptions to a general rule (like helping slip my 9-year-old daughter Vivienne’s legs into a pair of pants) and going above and beyond (such as first warming her clothes in the dryer on a cold morning). But as these children—and all kids—grow, it’s important to encourage self-reliance and expect them to do what they can for themselves at each stage of development. The best act of service you can provide is walking your child through a new process and teaching him, step-by-step, how to be more capable, says Dr. Chapman.

“You certainly don’t have to jump at every request,” Dr. Chapman says. A thoughtful response will do, even if it’s to deny an ask. And watch out for how those exceptions to rules pile up. Whenever I find myself regularly scooping Vivienne’s dirty jammies off the floor and carrying her backpack to the door for her, I try to stop and recalibrate.

These children feel most valued when you choose to spend time with them.

A child who often says, “Watch this!” or “Play with me,” is begging for quality time. Dr. Chapman’s own daughter would say, “Daddy, come to my room! I want to show you something.”

In addition to just being together, offer your undivided attention. Dr. Markham calls this “special time,” and says it can be short, but let your child choose the activity. Cedric Chauvet, of Seattle, says, “Each of my kids will beg for a ‘conversation.’ It’s a one-on-one chat we’ll have while lying in bed head-against-head before going to sleep.”

“If your child’s love language is quality time and your method of discipline is putting her in her room and isolating her, that’s a severe punishment to her,” says Dr. Chapman. Also, don’t assume that spending extra time together means that you need to abandon your to-do list. Even reading beside your child when she’s absorbed in her own play will let her feel your warm presence.

Though Dr. Chapman believes that love languages are like personality traits that stay with us for life, your child’s preference might seem to change from moment to moment and stage to stage. A toddler who craves snuggles may grow into a 7-year-old who likes to roughhouse. A kid who basks in praise might become skeptical of your reassurance at some point and instead just need a little quality time.

Stay tuned in to what your child’s reactions and behaviors say about the type of love she needs in any given moment and there’s no doubt that you’ll continue to connect—and reconnect—as she grows. 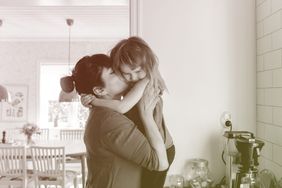 11 Simple Ways to Show Your Child Your Love 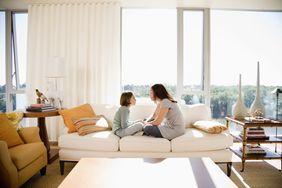