It goes without saying that children don't come with an instruction manual -- so we learn along the way from our extended family, friends, pediatricians, and other experts. (That goes for me too, and I'm a pediatric cardiologist.) How accurate is the info you've gotten so far? Test your kids'-health IQ with this quiz. Then check the correct responses at the end and get your score. Good luck!

1. Pediatricians recommend giving cow's milk to babies only after they turn 1 year old. Why?

a. It's low in iron, so giving it too early can cause anemia.

b. Giving it too soon can cause allergies.

c. Cow's milk tastes funny to young babies, so they won't drink it.

d. Most babies are lactose intolerant until age 1.

2. Your child can be vaccinated against each of these except:

3. What is the average weight for a 12-month-old baby?

4. Why don't antibiotics like amoxicillin help many children with ear infections?

a. Antibiotics only kill bacteria, not viruses, and viruses cause many ear infections.

b. Children are already vaccinated against ear infections.

c. The bacteria causing ear infections are resistant to the antibiotics.

5. How should you protect a child's teeth?

a. Clean them daily as soon as they appear, using a damp cloth or a soft toothbrush.

b. Begin flossing when your child is between 2 and 3 years old, since cavities often develop between teeth.

d. All of the above

6. Head lice are common in preschoolers. Pick the fact about lice.

b. Dogs, cats, and other pets in your home can spread lice and also need to be treated.

c. Children with lice should be kept out of child care or school until all nits are removed from their hair.

d. Recently worn clothes should be washed in hot water.

7. Your 2-week-old baby seems very tired and isn't eating well. You take her rectal temperature with a digital thermometer, and it is 101?F. What should you do?

a. Take her to an emergency room or clinic for blood, urine, and spinal-fluid tests and a shot of antibiotics.

b. Try to comfort and feed her; then try to get her to sleep.

c. Make her more comfortable with a fever-reducer like acetaminophen.

d. Nothing. This is a normal temperature for a baby.

8. Which of the following eye issues is normal and needs no special treatment?

a. Your 2-month-old sometimes looks cross-eyed.

b. On a flash photo, one of your toddler's pupils looks white.

c. Your preschooler rubs his eyes and squints a lot.

d. Your toddler often wakes up with crust around his eyes.

9. Your kindergartner has a fever and a sore throat and is diagnosed with strep throat. Why is it important to treat her with antibiotics?

a. It makes the fever and throat pain go away much more quickly.

b. It protects against damage to her heart.

c. It prevents the strep infection from harming her kidneys and causing bloody urine.

d. It allows her to return to school immediately without spreading the infection.

10. At a checkup, the pediatrician says your preschooler has a heart murmur. What does that mean?

a. His heartbeat speeds up and slows down dramatically while he's breathing normally.

b. There is a hole or another structural problem with the heart muscles, which may require surgery.

c. Your child's heart is beating too weakly, and he may need medicine to strengthen it.

d. His heart makes an extra "whoosh" sound, which is very common and usually the sound of blood moving normally through the heart.

11. A few hours after going to sleep, your preschooler suddenly screams in distress and doesn't recognize you. Within minutes, she falls back to sleep. What happened?

a. She may have had a seizure and needs medical attention.

b. She had a brief "night terror," which is alarming but not dangerous.

d. She had a nightmare.

12. All of these can trigger wheezing in a child with asthma except:

a. Getting a cold

b. Dust from stuffed animals or carpeting

e. Running or other exercise

13. Since the Affordable Care Act passed in 2010, which of these are true?

a. Most preventive pediatric-health services, including immunizations, must be covered by insurance with no co-pays.

b. No child can be denied health insurance due to a preexisting condition.

c. Insurance companies cannot place lifetime "caps" on health care for anyone, including children with complex or chronic medical problems.

d. By 2016, nearly 6 million uninsured children will be eligible for health-care benefits.

e. All of the above.

14. Why should pregnant women not change cat litter?

a. Cat poop can harbor a parasite called toxoplasma, which is circulated through the bloodstream and can lead to blindness and brain damage in a fetus.

b. A mom's exposure to cat hair increases a fetus's chance of later developing pet allergies.

c. It can lead to cat-scratch fever.

15. Which of the following is true about breastfeeding and a mother's diet?

a. Even small amounts of caffeine can cause sleep problems in breastfed babies.

b. It takes about two hours for a mother's body to clear the alcohol from a drink, so you should never have more than one drink between nursing sessions.

c. Antidepressants should not be taken while breastfeeding.

d. Because nicotine doesn't enter breast milk, a mother's smoking has no bad effects on a baby.

16. Many babies are "colicky" and cry for hours on end for no clear reason. What is true about colic?

a. Don't pick up your colicky baby when he is crying, since this may create bad habits.

b. Bad parenting, milk allergies, acid reflux, and gas are common causes of colic in infants.

c. Colic usually continues until about 6 months of age.

d. Even loving parents can become extremely upset and angry at colicky babies, and they should step away and ask for help if they're about to lose it.

17. Which of the following children needs to go to an emergency room?

a. The 3-year-old who falls at home while running and hits his head on the ground and cries but remains conscious and feels fine a few minutes later

b. The 5-year-old with a slight fever and crampy pain, which seems to move to the lower-right part of her belly

c. The 1-month-old who spits up after feeding

d. The 8-year-old with a cough, a slight fever, and a headache

18. Car accidents are a leading cause of death in children. Which of these statements about car safety is false?

a. Car seats should face the back of a vehicle until a child is 2.

b. 41 percent of all kids killed in car crashes were wearing no seat belt and not in a car seat.

c. You can switch your child to a booster seat once he turns 4.

d. Many children can wear regular seat belts after 8 years of age.

19. Which of the following is important when putting an infant to sleep in a crib?

a. Use crib bumpers and extra pillows so she won't hurt herself against the rails.

b. Place your baby to sleep on her back, not her belly or side.

c. Ensure that the spaces between the crib rails are wide enough for her to fit her arms and legs through them.

d. Babies get cold easily, so use several blankets to keep her warm.

20. Your child has a rash on his arm that looks like a bull's-eye. What should you do?

a. Tell him not to scratch, and treat it with hydrocortisone cream.

b. Find out what he may have eaten or touched to cause a reaction.

c. Be more vigilant about using sunscreen in the future to avoid sunburns.

d. Take him to the doctor for blood tests and antibiotics.

Give yourself one point for every correct answer.

Wow! You're practically ready to be a pediatrician!

Way to go! You know an impressive amount about kids' health.

You're off to a great start. In order to stay on top of the latest health news, be sure to visit our blog on a regular basis by logging on to goodyblog.com.

Though you didn't ace this quiz, you're taking the time to learn. Brush up on kids'-health basics by checking out our health channel at parents.com/health.

Originally published in the August 2013 issue of Parents magazine. 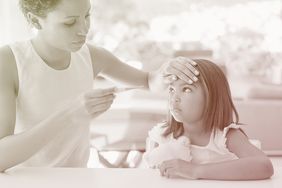