Parents.com's "Ask Your Mom" columnist, Emily Edlynn, Ph.D., explains how thinking about nudity in families brings up important topics of body shame versus positivity and healthy boundaries, and can help us realize when we may illogically link nudity with sex.

My mother-in-law still bathes and showers with my 9-year-old niece. I find this very strange. When I talk to my partner about it, they say "they're close." Is this weird and should I say anything to my in-laws?

My first response, without thinking, was "yes, this is weird." When I took a step back, however, I realized this automatic reaction comes from my culture's voice in my head. For complex reasons way beyond the scope of a parenting advice column, Americans are quick to associate nudity with sexuality, and sexuality as taboo; therefore, nudity = taboo.

Looking outside of the lens of our culture, I more thoughtfully changed my response to, "no, this is not strange." Probably. The scenario also brings up interesting considerations around how we teach our children about bodies and boundaries.

Nudity among strangers reigns in certain settings, like locker rooms, spas, and French beaches. As my children have become more private with age, I have explained that there will be situations in their future of undressing in front of others, and it doesn't have to be embarrassing or "inappropriate."

As parents, we need to look for these opportunities to distinguish naked bodies from sex. In fact, as crop tops have become the style du jour, I intentionally made no issue of my daughters bearing their tummies all summer because I did not want to sexualize their young stomachs. Nudity and showing body parts does not have to equal sex, despite the American tilt in this direction.

How Old Is Too Old for Siblings To Se

I remember when my daughters and son suddenly shifted from running around the house naked to rushing to slam the door if I walked in the room while they were changing. This feels a bit ludicrous to me as their naked forms are as normal and natural as the day they were born, but I wonder how much I (and/or our cultural norms) influenced this rush to privacy. Of course, I supported their new body boundaries as their right to privacy, but also hoped that this was not rooted in shame.

Body positivity has become a trend to counter generations of body shaming, most often (but not always) directed toward girls and women. Although we likely view covering up nude bodies in our homes as a way to teach appropriate privacy limits, we need to be careful with what we may also be communicating about bodies and shame. I have read arguments that being more carefree about family members being naked in the home models a healthy lack of self-consciousness about bodies, and shows a range of what normal bodies look like far from the unattainable images children see in the media.

I realize, however, that bathing together goes beyond the step of seeing each other's naked bodies. This is where I think cultural differences influence our reactions even more than thinking about nakedness. In the dominant American culture, bathing together is not a mainstream practice, and even less so between a grandparent and grandchild. But would this be different if we sexualized nudity less? What about the bathing itself is "Inappropriate" besides the meaning we may attach to it?

Their Bodies, Their Choice

Just as cultural norms differ around nudity in families, each family's norm will also vary. Family members can decide what's comfortable for them, and it sounds like your niece's family does not view her showering with her grandmother as a problem. Your niece of course should have the ultimate decision-making power. If her comfort level were to change, then yes, she should have the choice to no longer bathe or shower with her grandmother. At age 9, this may happen fairly soon, as puberty often accelerates the desire for privacy with body consciousness typically accompanying body changes.

The Concern of Sexual Abuse

There has been an unfortunate association made between areas of even partial nudity like the bathroom, and sexual perversion, including risk of sexual abuse. Most recently, this has taken the form of transphobia couched in the great bathroom debates in state legislatures, following the tradition of homophobia. I imagine an unconscious fear some may have when they read your question is that a grandmother bathing with her 9-year-old grandchild contains sexual undertones. Which yes, would require intervention. But this leap of logic is a big one.

Sexual abuse is defined as "sexual activity" with a child, which involves a wide range of behaviors, with the common factor of sex as part of the content or intention. A serious and harmful problem both in families and in communities, any incident of child sexual abuse is one too many. However, we need to respect the real danger of sexual abuse by being cautious about not alleging it in benign circumstances. This includes not assuming sexuality as an automatic part of nudity. This in itself could be very damaging to healthy families making their own choices at home.

Assuming that you do not have concerns about sexual abuse, I would recommend doing what I did: think more about your own reaction. Since this is happening between family members outside of your nuclear family, it does not seem to warrant your intervention. You make decisions for your family based on everyone's comfort level, and other families will make their own choices. As long as our children are safe and learning positive messages about bodies and boundaries, we can all work to embrace a wide range of "normal." 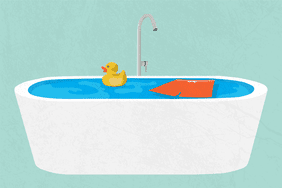 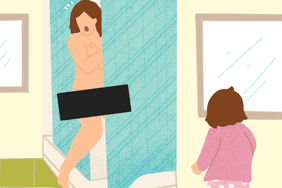 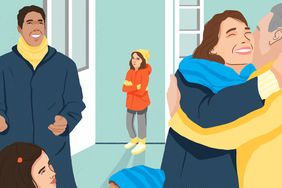