Yes, Golden Boobs is a Thing! Here's What To Know About Breastfeeding Awards

Do you have golden boobs? Here's what new mothers should know about the controversial breastfeeding awards trend.

It's no secret that breastfeeding is hard work. Not only does nursing Baby take lots of time, it also presents a host of challenges (like sore nipples, clogged ducts, mastitis, and thrush) that can make the process uncomfortable. That's why many women are recognizing their progress with "breastfeeding awards" broken down into the following categories:

The reward system seemingly began on baby forums in the United Kingdom, where women touted their "boob status" in their post signatures. According to Darcy Zalewski, the blogger behind Life With Darcy and Brian, the rankings served as "golden star stickers" for nursing mamas.

Like many Internet trends, the breastfeeding awards have extended into real life. The Bada** Breastfeeder, an Instagram account about breastfeeding run by Abby Theuring, recently posted a picture of a "golden boobies cake." Grace Daniels Cakes in Galway, Ireland, baked the confection to celebrate her client's one-year anniversary of breastfeeding. It resembled a pair of breasts with one exposed nipple, and included a frosting caption reading "Congratulations Jeni on Your Golden Boobies!"

Some popular retailers have picked up on the breastfeeding awards as well. Commerce websites like Etsy and Amazon sell "golden boobs" keyrings, jewelry, mugs, T-shirts, and other paraphernalia. These products let women show off their status to the world.

Despite its popularity on message boards, though, the breastfeeding awards have sparked controversy in the online baby community. Many mothers don't breastfeed their baby, whether it's because of personal preference or medical reasons. And even though formula is completely healthy, some bottle-feeding women may believe the breastfeeding system alienates or criticizes them. Others may think creates an unfair competition among new moms.

A proponent of the breastfeeding awards, Zalewski says that the rankings aren't meant to make women feel bad. "They are a way to help celebrate the ability to continue the breastfeeding (or pumping!) relationship despite societal pressures and other life factors that can make this difficult," she writes on her blog. "While natural, (breastfeeding) is not necessarily easy. So for me to reach each milestone along the way has encouraged me to keep going and to made me proud of our accomplishments."

At the end of the day, the breastfeeding awards are a way to add a little fun into motherhood. It should go without saying that new mothers should be applauded for their efforts—no matter whether they feed Baby from the breast or the bottle! 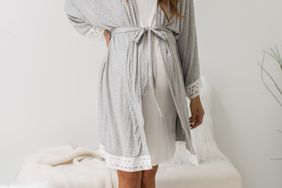